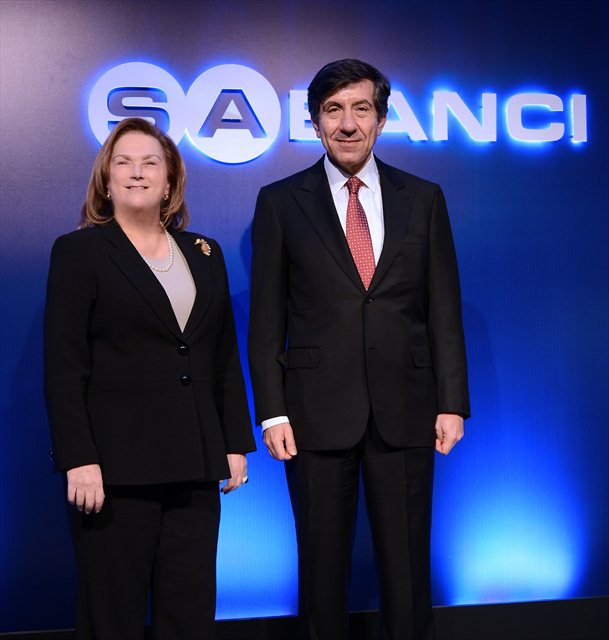 In the meeting; Güler Sabancı, Chairman of the Executive Board of Sabancı Group, said: Growth in the U.S.A. in 2015 is estimated to be about 3 percent. Economical pre-indicators of last a few weeks may refer to a slight deceleration, but growth has gathered pace in the U.S.A. fundamentally. With constant elusiveness in timing of interest rate hike, it is clear that a slight increase will no longer affect developing countries that govern themselves well. Growth in Germany has gained pace again after a serious stopover. The latest figures of France look better than expected. Besides, Greece has earned a "negotiation period" of 4 months. Those are good news for Europe and therefore Turkey. It will be surprising if growth exceeds 7 percent in China in the next few years. An obvious deceleration is inevitable, internal debt has increased remarkably. But a harsh deceleration is not expected.

We expect that the decrease in oil prices of growth predictions of 2015 will escalate the growth above predicted values especially in "developed importer" economies. As I stated in my New Year Message, it is observed that 2015 is going to be the "transient year" to a period without elections. Our country has been in an election atmosphere for about two years. Elections are essential for democracies. Therefore; we expect the election period to be completed in peace, comfort and democratic maturity.

After elections in June, we are going to enter a four year period without elections. We expect that. In this period, we should create a rapid growth period again by focusing on economy and realizing required regulations and structural reforms.

In this sense, we do care about the steps taken for peace period last weekend. We still believe that continuation of the period successfully will earn our social and economic development a great momentum. We shouldn't give up on that".

"As for Turkish economy; we see that there is a general expectation towards a stronger growth than 2014 although there is a slight fall in the first two months of 2015. We expect internal demand to pull itself together moderately and external demand to keep its low progress. It is observed that agricultural production that regressed in 2014 is going to contribute to growth positively depending on the appropriateness of climatic conditions. Although the possibility that FED increases the interest rates in the second half of the year poses a risk against Turkey, it is possible that monetary expansionary program to be implemented by European Central Bank will limit the effects of FED and that capital inflow to Turkish economy will continue.

Due to all those facts, there may appear a window of opportunity in the second half of the year. We find long-term point of view of medium-term program positive and we expected declared reforms to be applied in a prioritized plan after elections 'at the latest'. We can achieve a higher growth and take off from a stopover of 10,000 dollars in terms of per capita income only in that way.' 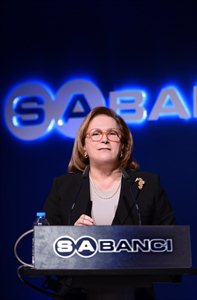 'We can achieve that takeoff only by supporting with new technologies! At the moment, all developed or developing countries are working in that regard. World leaders receive special briefings in terms of digital world's effects to, threats against and opportunities for business World. A great transformation takes place in the world due to developing technologies and on that point, everyone needs to answer the question of 'Where are we going to be on that world?'. As for business world and companies, those that meet the expectations and even that open a new window to that world step forward. There is an important opportunity that we can take on that point. Turkey can grow fast only if it integrates with that new technology revolution.

A question has been directed to executives of giant companies of the world within the scope of World Economic Forum Meetings: What keeps you awake at night apart from geopolitical risks? A common response has been received: “Thinking of how are we going to manage disruptive effects of technological developments to current business models and how are we going to turn that threat to an opportunity'. Therefore, we understand that the entire world is struggling to keep up with technological advances. We are not out of that race.

Digitalization has been dominating all fields of social and corporate lives. As Sabancı Group, we follow the technological trends that direct business performing styles globally and we shape our plans within that line. In that new era dominated by high level of technology; we try to be a part of alteration and even to manage it and lead it with all our companies.

Bringing a different model to industry-university collaboration and founded at the end of 2014, Composite Technologies Perfection Center is a live proof of our struggle towards that. We will always continue to produce such valuable projects and support produced projects.'

“The value we give to people, encourages us to be more active in fields such as innovation and sustainability. With the responsibility brought by being a Group focused on humanity, we have already placed the concept of sustainability into centers of our all production and business processes. With every step we take, we assess the compatibility of our implementations to environmental, economic and social sustainability principles rigorously.

Besides, we expect that 2015 Paris Meeting will be a milestone in terms of climate change in the world and therefore sustainability.

Within that framework, we are proud of our companies with their successful implementations in terms of sustainability and their corporate social responsibility projects. For instance, Solar Impulse, the first airplane to take a world tour with only solar energy, without using a drop of oil, is taking off in Abu Dhabi this week. The only supporter of Solar Impulse from Turkey that will write history in terms of sustainability is Brisa. On the other hand, aiming for leadership in bus and midibus market; Temsa is going to release the electric bus produced by itself into the market soon.

On the phase of realizing aims of sustainability, innovation steps in. As Sabancı, our innovation culture that we have interiorized for the last 10 years is an important means for us. My colleagues in Sabancı Group develop different and active approaches towards business processes with an understanding at stake and focused on customers.

On the other hand, G20 summit whose term presidency was acquired by Turkey will increase both global competitive power of Turkey and sustainability of growth environmentally and socially. B20 meetings that I have been the Trade Task Force Co-chair for are essential as platforms leaded by our country. As I expressed at the beginning of G-20 period, the most important duty of us here is to focus on implementations and to start to move. As Mr. Babacan has said, this is the point that we are going to make the difference.'

'This week has a different kind of importance. We are going to celebrate International Women's Day on 8th March. However, we should emphasize that 'women are important for us for not only one day, but everyday'. As Sabancı Group, We are the first company that signed 'Women's Empowerment Principles' of United Nations in Turkey. We have set the goal of empowering the role of women in the society as one of the most important aims of us. Besides, we guaranteed that women have the same equal chances and opportunities as men in all aspects under the roof of Sabancı with 'Equality at Work Declaration' that we signed in 2013. As for the big picture, we observe that participation of women in labor force between 2003-2013 could only increase from 26 percent to 30 percent in Turkey. However, as Sabancı Group, our white collar women employee rate is 38%. We are above Turkey averages. But we still find that position insufficient. Therefore, we have a long way to carry women to the position that they really deserve. Participation of women in business world provides opportunities in terms of growth not only for Turkey, but also for the entire world. Researches and studies on that subjects show that equal participation of women in business life is not only a matter of human rights, but it also is a correct approach that creates value for the business. Only the executives that are aware of that situation can lead their corporations forward.

As Sabancı Group, we are trying to contribute the production, growth and development processes of Turkey with a sustainable understanding in every field that we operate, from industry to energy, from banking to retail market. All products and services that we provide in both industry and retail market increases life quality of people at the end of the day and they add value to lives of everyone in a way. The core of our business is human, so is our priority. It has been a successful year for Sabancı Group that we reached our goals for 2014, kept our leadership in industries that we operate, increased our market share. I believe that we will continue our achievements in 2015 with the same motivation and with all our shareholders.

Having shared aims for 2015, Kurtul expressed that as the Group, they focus on risk management and prioritize profitable growth. Kurtul said, 'We have made energy investments worth of 22 billion TL with today's value in eight years. We are going to make combined investment of about 3.5 billion TL in 2015, energy being in the first place. We are going to take projects of Yamanlı and Doğançay hydroelectric power plants and Tufanbeyli lignite power plant having a total investment sum of 1.2 billion Euro into operation in 2015. We will follow latest acquisition opportunities in cement market. Besides, we aim for increasing the use of alternative fuel and carrying out sustainability work. Furthermore, we will maintain our multi-channel investments to provide perfect service for our customers in Teknosa while keeping on our recycling project in Carrefoursa. In our industry companies, we will realize projects on efficiency of our commercial processes and innovative growth. In 2015, the number of our employees will exceed 64 thousand people by an increase of 4,000 with the growth in the field of retail.'