An Assessment of 2012 by Sabancı Holding Chairman Güler Sabancı 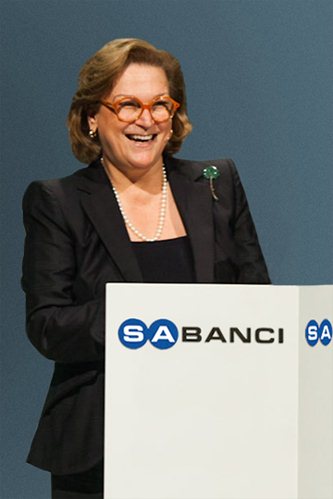 Evaluating 2012, Sabancı also expressed her expectations for 2013 in her message. Güler Sabancı's message is as follows:

The global economy enters 2013 in an environment where interaction between countries and regions is growing, and the fluctuations in economies are increasingly dependent on each other.

At one point, some thought that "emerging countries" such as China, India or Brazil could now grow independently from "older" developed countries, without being affected by the conditions in USA, Europe and Japan.  However, this passing year has showed us that the world economy comprises very interdependent national and regional economies.

Of course, there are significant differences among countries and regions.  In the long term, the developing countries will continue to grow more quickly than the developed countries thanks to their demographic structure and ability to quickly adapt to technology.

On the other hand, over the course of the last year we saw that the deceleration of an important region spreads through foreign trade and financial markets, and turns into a global deceleration.  In 2012, the slow-down in Europe reached a crisis.  The chronic stagnation in Japan continued.  The economic performance of the United States is relatively more active, but it is still fragile.

In such an environment, the performance of the developed countries directly affected the developing, growing countries. In the passing year, the growth in China, which was growing very quickly, dropped 2 points, while the growth of India dropped almost 3 points. Brazil's growth virtually stopped in 2012.

Because of these external factors, Turkey's economic growth decelerated drastically in 2012, compared to its extraordinary performance in 2010 and 2011. We grew at about 3 percent. Nevertheless, given the extraordinary and uncertain conditions in the world and especially in Europe, even this rate should be considered a success for our economy.

This slowdown in our economy was triggered by not only the external conditions, but also the cautious economic policy.

As a result of the effective studies and insights of our economy management, our country's macro-economic stability was actually preserved, concerns about current deficit alleviated, Turkey's credit score increased and inflation slowed down.

While the Medium Term Financial Plan declared by the economy management is in itself favorable, as a country we should not be content with a 4-5 percent growth.

Although our growth expectation for 2013 is 4%, I believe that Turkey certainly needs a growth of at least 6 percent in medium and long term.

In the next years, Turkish economy's two primary macro-economic goals should be “at least 6 percent growth” and “a current account deficit under 6 percent”. We can call this the “Dual Sixes” formula.

If we can accomplish this in medium and long terms, we can reach all our development, stability and employment goals. We believe that the Turkish Industrial Strategy Document and Action Plan, the resulting importance given to science and technology, and the ecosystem that the universities and the industry are trying to create cooperatively will be very helpful.

As a result, we believe that a Turkish Industry with high added value, focused on efficiency and sustainability, internalized innovation culture and that will be a permanent solution to both growth and current deficit can be created.

- “WE STRENGTHENED OUR LEADERSHIP GOAL” -

As the Sabancı University, we will continue our studies, bearing in mind that the university-industry cooperation will bring innovative results which create added value.

Additionally, while increasing the financing power, the Turkish private sector should also bring long term capital, and form partnerships that will develop the innovation and technology culture.  Today, the world is not in a serious need of resources, as lower interests and lower inflation also indicates.  However, the helpful external resource is the long term investment capital that comes with advanced technology.

As Sabancı Group, we will continue doing our part in this.  This year, in Enerjisa, we formed a partnership with E.On, one of the greatest and most innovative energy companies in the world. This way, we increased Enerjisa’s goal of 5 thousand megawatts to 8 thousand megawatts. We strengthened our leadership goal.

European Central Bank President Mario Draghi's statement from last summer, “We are ready to do whatever it takes to preserve the Euro; and believe me, it will be enough,” stopped the decline in Europe. This statement gave the markets a significant confidence and helped to reduce the struggling countries' borrowing costs, even if moderately.

Towards the second half of 2013, Europe can only recover from the crisis permanently -not temporarily- if drastic structural reforms for growth can be made in southern countries and if a Eurozone-wide new institutional structuring can be achieved. Opinion leaders are saying that instead of a "one-tiered" European Union, a "multi-tiered" model will emerge if this new institutional and political structure is established in Europe.

Turkey should discuss entering the newly structured European Union more conveniently and easily with a membership that includes this new and complete membership, which complies with our own requests, wishes and needs, but which is also outside the scope of the shared sovereignty that the Eurozone is heading for, like the membership of England or maybe Sweden.

Germany's Minister of Foreign Affairs Guido Westervelle’s recent statement was very remarkable: “In the near future, our interest in Turkey may be greater than Turkey’s interest in us.”

This shows us that in 2013, a new era about the European Union may begin. Turkey must seize this opportunity and do its best to reap the rewards of the fifty-year long investment carried out by all its people, institutions and organisations.

Turkey can only accomplish its goals for 2023 and become a highly respected and effective country in the world by reaching the level it deserves in Basic Human Rights, Equality of Women and Men, Supremacy of Law and Libertarian Democracy.

After the 2011 elections, for the first time Turkey had a chance to create a constitution to be written by the representatives of the people.

In 2012, there were intense studies with a participatory process.

However, as we are approaching the end of the year, we must see that we have not achieved the results we desired.

Nevertheless, we still believe that the sensitive issues preventing conciliation will be overcome through the competencies of all our political party leaders.

Accomplishing this goal will be the greatest test for this assembly.

In 2012, the upheaval in Syria, which now turned into a civil war, increased the uncertainty and tension in all the neighboring countries and became alarming.

As a member of international organizations, Turkey always does its best to protect the surrounding stability and peace.

We hope that 2013 will be a year to establish peace, human rights and democracy in especially Syria and all the neighboring countries.

2012 has been a year that we accomplished our plans in all the sectors that we operate in, increased our profits and grew.

In 2013, our goal is creating sustainable value to all our stakeholders by being more competitive and focused on efficiency in our current operations with your participation.

As you know, our vision is “Creating sustainable advantage through differentiation”. This differentiation is not just in products and services; it’s further than that.

We can only be sustainable, pioneering and creative if we, as the Sabancı employees, keep the participative climate that holds the innovation culture alive.

In 2013, openness to change and always searching for the best will still be indispensable for our work culture.

As Sabancı Group, we will continue to pioneer change during the next year. I expect our companies to aim for leadership in every sector that we operate in and grow faster.We have all the means to grow faster. I believe 2013 will be a new beginning to grow faster.

Our companies comprise 12% of the total market cap of the Istanbul Stock Exchange.

Our group pays 5.5% of the total tax revenue of Turkey's treasury.

You, Sabancı employees, who love their country and their jobs, who are conscious of their responsibilities for their environment and community, and who prepare for the future in the light of reason and science, help Sabancı to be Turkey's leading force and make Sabancı exceptional.

I wish you and your families a new year which you will spend in good health and peace.