Another Decoration for Guler Sabancı

Sabancı Holding Chairman of the Board Guler Sabancı has received the French decoration, the Legion d'Honneur. The decoration will be presented to Guler Sabancı by Christine Lagarde, France's Minister of the Economy, Industry and Employment in a ceremony to be held at Sakip Sabancı Museum on June 15th, 2010. 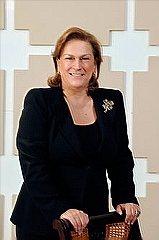 Guler Sabancı, who received a decoration from Italy in 2002, was also presented with the "Leopold II Commander Decoration" in 2007 by Armand de Decker, the President of the Belgian Senate for her many contributions to the economic relationship between Turkey and Belgium.   In 2009, in a ceremony held in honor of King Juan Carlos I, Guler Sabancı was presented with "Encomienda De Numero Decaoration", Spain's highest decoration of merit by Elena Salgado, the Second Vice President of the Government of Spain, for her contributions to the relationship between the two countries. And finally, in April she was awarded the "Silbernes Ehrenkreuz der Republik Osterreich", the highest state decoration given by the Republic of Austria, by Reinhold Mitterlehner, the Austrian Minister of Economy, Family and Youth.