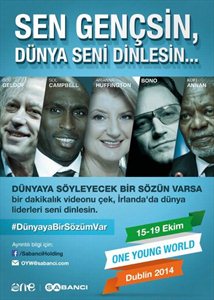 Sabancı Holding will ensure that the Turkish delegates of One Young World, accepted as the world’s largest youth meeting, meet with the world’s young people, in its fifth year as it has in the last four years. 10 young people to be elected will be entitled to go to “One Young World” to be held in Dublin, Ireland, between October 15 and 19, 2014 and called as the “Davos of the Young People”.

In the two-stage election process, the young people will apply on facebook.com/sabanciholding page by shooting a two-minute video where they will explain their opinions about any of the world’s problems.

Following the assessments, 10 young people who have successfully completed all stages will have the chance to speak about the world’s problems in Dublin, Ireland, with such figures as Kofi Annan, Sir Bob Geldof, Mohammed Yunus, Bono etc. together with 1500 young people from all over the world.

Suat Özyaprak, Corporate Communication Director of Sabancı Holding, stated the following about the subject: “We are very proud to represent Turkey once again at the world’s largest youth summit for which we, as Sabancı Holding, provide our support for the fifth time this year. Until today, we have made it possible for over fifty young delegates from Turkey to meet with the world leaders. Many of them made speeches at different sessions, shared their ideas with the world leaders and represented Turkey. This is such a platform that, for example, you have the chance to talk one-to-one with Bill Clinton about the world policy, with Sir Richard Branson about his space adventure or with Kofi Annan about human rights. This is an extremely important networking opportunity for the young. Many of our delegates, after their return to Turkey, continued to contact and collaborate with the leaders and participating young people about many subjects. This opportunity is also a very significant milestone for their careers. Some of them even received job offers following their return from the summit.”

Özyaprak went on speaking as follows: “One Young World is almost the only platform where the young people talk and the world leaders listen to them. As Sabancı, our aim is to ensure that each of our delegates should activity take the floor and represent us. We have quite beautiful surprises for the summit to be held in Dublin, Ireland, this year. For example, the European headquarters of Google is in Dublin and we will visit this place together with our delegates.”

One Young World 2013 was in South Africa.

It is expected that the young people to attend One Young World which was previously held in UK, Switzerland, USA and South Africa, should be creative and prone to teamwork, have a leadership potential, show interest in global problems and should have participated to voluntary activities before.

The summit held in order to ensure that the world leaders should offer their opinions and their solutions about the world problems and should reach out to governments, business world and public opinion has been attended until now by many influential figures such as Güler Sabancı, Chairperson of the Board of Directors of Sabancı Holding, Bill Clinton, former President of the USA, Sir Bob Geldof, Kofi Annan, former General Secretary of the U.N., Mohammed Yunus, Sir Richard Branson etc.

Detailed information about the One Young World Summit and the election process can be accessed via facebook.com/sabanciholding.