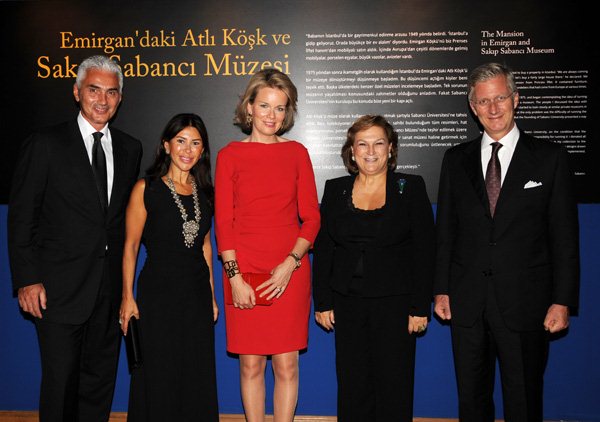 Sabancı Holding Chairwoman of the Board Güler Sabancı gave a dinner reception in honor of Belgian Crown Prince Philippe and Princess Mathilde at the Sakıp Sabancı Museum.

Belgian Crown Prince Philippe started his speech at the dinner reception by thanking Güler Sabancı and said: “I think energy, initiative and courage are the defining characteristics of the Sabancı Family. I believe that the Sakıp Sabancı Museum, an icon of Turkey's dynamism, is a fantastic venue for productive future collaborations between the two countries.”

Belgian Crown Prince Philippe continued his speech by saying: “Additionally I have full faith in this evening's contribution to the achievements of both countries and that the successful cooperation of Sabancı Holding and Ageas in Aksigorta will set an example for new partnerships between Belgium and Turkey.”

Güler Sabancı said in her speech “The late Sakıp Sabancı received here at Atlı Köşk the 'Ordre de Leopold II, Commander Class' in 1987. The medal was presented by your father King Albert II of Belgium, then crown price of Belgium. Both Mr. Sabancı and the whole Sabancı family were very proud to have received this honorable medal. Twenty years after that, I had the same honor in the Belgian Senate.

Today, one of Sabancı's strongest competencies is our harmonious and successful partnerships. Our objective, result-oriented and participative management style has a big role in this. As you all know, we are in a partnership in the insurance business, which has a high potential of growth, with Ageas in Aksigorta”.

Furthermore, Sabancı Holding Chairwoman of the Board Güler Sabancı was presented the 'Ordre de Leopold II, Commander Class' in 2007 by Senate Chairman Armand De Decker on behalf of King Albert II of Belgium at a ceremony held at the Belgian Senate for her contributions to Turkish-Belgian economic relations.

The late Chairman of the Board of Sabancı Holding Sakıp Sabancı also received 'Ordre de Leopold II, Commander Class' in 1987 at a ceremony held in Atlı Köşk in Emirgan in 1987 for his contributions to Turkish-Belgian economic relations. The medal was given to late Sakıp Sabancı by King Albert II of Belgium, who was then the crown prince of Belgium.