Bringing Culture, Art and Entertainment Together: The Sabancı Spring Hits the Road 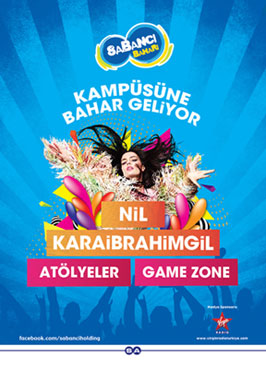 This Festival Itself Was Designed by Young People on Facebook

Unlike other festivals, Sabancı Holding presented a platform to students on the social network website facebook that allowed them to choose and design the entertainment that they would like to see on their campuses. The students did this through the facebook.com/sabanciholding page.

The Sabancı Spring is held in two parts, as day and night activities, based on students' choices. The day activities this year will include a Chocolate Making Workshop, a Handcrafts Workshop, a Design Workshop, a Music Workshop, a DJ Workshop, a Painting Workshop, Karaoke, a Career Hunt, and Pro Evolution Soccer (PES), Guitar Hero and Nintendo Wii tournaments. Again, using facebook, the students will have the opportunity to select which amateur music groups will be the support groups on the main stage, as well as meeting Nil Karaibrahimgil in person. This can all be done via the daily festival schedule on facebook.com/sabanciholding.

Beginning in May and being held at five universities in various regions of Turkey, the Sabancı Spring will ensure that young students get the entertainment that they want, in the style that they want.

13th of May 2011 Kütahya Dumlupınar University

16th of May 2011 Eskişehir Osmangazi University