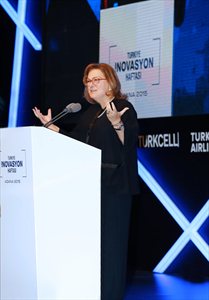 In her speech, Sabancı stated:

"The world and the humanity are now in a transition process. Added value chains in the World are integrating and transforming in a mind blowing pace. "Brand new technologies are about the erase the boundaries between service sector and industry sector.

There are three main trends that have unpreventable and transitive effects: Urbanization and climate change, women's increasing participation in business life and digitalization. As business world, we are trying to understand effects of these main trends and turn them into an opportunity in order to keep pace with this transition. We all strove to think the future and the needs of future generations.

Sabancı stated: "In last weeks the Chairman of the IMF Christine Lagarde said that 'we all will be fried like chickens'". Unfortunately, we seem to be in the group of countries which will get fried because of the climate change. Studies indicate that, in this context, Turkey, along with countries such as Spain, Greece, and Italy, will be among the most affected countries in their climate zone. Foresights indicate that there will be an increase of 7 degrees Celsius at the Eastern and Southeastern Anatolia Regions. Climate change will affect a great range of sectors, from energy, to infrastructure, and to health, and tourism.

How can we turn it into an opportunity? How can we contribute this transition and change process together with innovation and technology? We have to work on this subject.

We see the reflections of this development in business models and we will continue to see them. For example; DHL is now able to make its deliveries with unmanned aerial vehicles. Drones fly to the addresses' determined by the software, and making a landing, and it makes the delivery. In this way, less carbon emission turns out to be possible.

Solar Impulse, without using a drop of fuel, is on its way to complete its world tour with only solar energy. And I want proudly share that Brisa is the only supporter of Solar Impulse in Turkey".

Sabancı, pointing out the relationship between innovation, and women's increasing participation in it, stated; "Second wave, which grows in sphere of influence, is women's increasing participation to every field. Women's role either as a consumer, or as a worker, or producer is growing in strength both in our country, and in the world. When we look through the innovation point of view, women with increasing participation to education and business life, has a role in innovation and decision making. Companies have to chase after innovation in order to supply the expectations of women. However, when we observe the scene until the late 20th century, we see that only 10 percent of the patents taken belongs to women's projects. It is my desire to see the day when that situation is changed in women's favor!"

Meanwhile, Güler Sabancı, on the topic of digitalization and innovation, states; "In our digitalized age, companies instantly find themselves in competition, or challenges from others. Life cycles of existing businesses got shorter. Information is more available than it has ever been in civilization's history. Due to the effects of technological developments in the world, business manners are rapidly changing. For example; we don't have to look for a taxi while going somewhere. You download Uber application in your phones. You choose the place you want to go, and a registered driver picks you up and takes you there. You don't have to carry cash with you either. They are able to withdraw the amount of money you need to pay from your registered credit card. Istanbul also is one of the hundreds of cities in the world in which Uber is available. Adana likes promoting innovation, too. Maybe, Adana will be included in this system.

I would like to share this with you in order to broaden our ideas. Lately I have been to America for the 30th anniversary of the Media Lab in MIT, which is a prominent figure of interdisciplinary education systems. Founded in 1985, MIT pioneering a lot of digital transformations in various fields, has focused on robotics and biology recently. Biology took over the chemistry's place. Today, the costs of biological studies have become reasonable.  Therefore, it will be possible for development to occur more rapidly.  MIT Media Lab researchers, from the beginning of the 21st century, are focusing on sensors which can measure the movements of its users, systems which are creating virtual entities with senses and emotions, projects like NetSound which can create a symphony on the Internet within just some minutes. In addition, this center has invented computers which can comprehend emotions and react to them! Developing technologies that can analyze brain waves and sensitively check them, researchers carry out a study on the nerve system in order to find cures for mental diseases or disorders such as Parkinson or major depression. Common goal of all these studies is to improve the life quality for the people. Even though its working fields change or diversify in years, something never changes in MIT Media Lab: AN ENVIRONMENT WHICH PROMOTES THE QUESTIONS NONE WOULD THINK ABOUT, TO BE ASKED!!!".

Sabancı also stated: "Industrial Research Institute, which is the joint organization of 265 leading industrial companies of America, stated in its recent report that at least half of the economic growth recorded at USA in the last 50 years came from technological innovations. Boston Consulting Group has recently prepared a report as well. In this report; trends that lie beneath the purchases all over the world was explained. According to this report, "Companies that couldn't follow innovation process should buy smaller companies with innovative ideas and add these innovations to their own organization". Again in the Most Innovative Companies Research of Boston Consulting Group in 2014 indicates that managers are planning on making 60% more investments when compared to the previous year.

The approaches of developed countries and their success show us that innovation is the only impulse for economic development in global scale. Then where are we on this picture?

Every year World Intellectual Property Organization (WIPO) publishes the Global Innovation Index. In September innovation scores of countries for 2015 was published. Turkey was 58th in 141 countries. Switzerland, England, Sweden, Holland and USA were listed as the most innovative countries of the world. A point that draws attention in the report was the law makers can build a solid ground for the innovative environment and accelerate the growth in developing countries. In terms of computer software spending to GDP ratios, our country stands at eighth position. In the field of domestic competition Turkey stands at 9th place, while standing at 13rd for protecting investors.  Our country is in 21st place at R&D expenditures which are financed by the business world. We are at 13rd place, when it comes to patent application to GDP ratio. In addition, we are 5th among 141 countries in the brand application field. We have a long way to go, but we have a great potential for openness to innovation.

With regulations such as National Science, Technology, and Innovation Strategy and R&D Center Law, the understanding of innovation started to grow on our country. Today, there are over 200 R&D centers in our country. These leaps should continue their pace. In terms of the transition from basic research into practice, universites and industries are the most important actors. In an information based economy, universities are the source of new and innovative technology and products just like in the example of MIT. The most important value here, of course, is the young people and their fresh ideas.

University-Industry cooperation is an ecosystem which has a broader perception than the traditional approach. In this ecosystem, there are a lot of different shareholders, and there is a really broad perspective; ranging from R&D centers to technoparks, and from research reports to intellectual property politics.

We completed the election process on Sunday. I wish the results of the election to be beneficial for our country.  Voters gave Justice and Development Party (AK Parti) the power to establish a government without coalition and the duty of restoring solidarity. We are waiting for the government to start its duty as soon as possible, leaving the election process behind. We need to work with unity and solidarity in this period. We have no time to waste. We are looking forward to see the reforms that will be made in the next three months. In recent years, there has been an effort to create an environment in which investing, innovation, and research are supported. We moved broadly forward to research infrastructure. However, we desire those supports to continue uninterrupted and as planned in new period".

Güler Sabancı explained the innovation approach of Sabancı Community as follows; "Innovation is a cultural matter. Each culture needs an optimum ambience to improve itself. In order to create this culture in companies, first of all it should be wanted, required and encouraged by the leaders. We are constantly working to create the ambiences where new ideas will emerge in order to enable "make a difference" approach of our vision.

We are struggling to create "right climate" for our employees aiming to transform innovative idea into solid success thanks to our innovation processes. As Group management, in 2004, we had a common will about integration of innovation to our processes. We opened up an opportunity for our companies to select their consultants who are believed to be the most effective on innovation for their own fields of activity. Then, we requested each company to share their own innovation road map, short and long termed targets, plans and projects. As the last chain of this process, each year our employees and companies are awarded in innovation category by our Gold Collar Awards which is our internal awarding system.

Thus, as Sabancı Community our experience proves that internalizing innovation is possible with the senior management is embracing, encouraging, tracing and rewarding innovation culture. Leadership shall request this, embrace this; team shall be motivated and be enthusiastic; traced and rewarded. Providing that approach of innovation may be intensified in enterprises and may contribute to create value and growing.

In this journey that we have started in 2004, we have developed several successful project, process and approaches. For the sake of some examples; Kozmopolit Technologies Excellence Center, for which we laid foundation in Teknopark with the collaboration of Kordsa Global and Sabancı University, will be one of the most important examples of university-industry collaboration. Our products are developed in our factory Temsa Global located in Adana, by Turkish engineers and in line with the requirements of customers. For example, at the end of this month we shall launch our first electrical bus. A little while back, Kordsa Global 215 AR-GE got the first place among all industry wide around its center.

How could Turkey invest in future with innovation? We are looking for the answers all together, we should look for them. In the emerging world and the challenging competition, accessing up-to-date information is not enough for a enterprise to survive. Winners are the ones who are creating new information, constantly renewing, not only consuming technology but developing, diversifying their services and products.

The only way for Turkey that is determined to be one of the top 10 largest economies of the world across its goals for 2023, is to demonstrate its strength in global competition and escape from the middle income trap shall be possible by developing quality innovation ecosystem and imbedding in our subconscious.