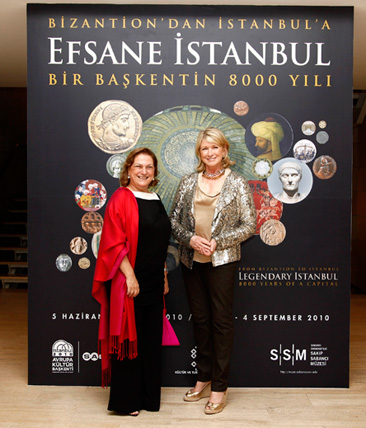 Famous American television producer, gourmet, presenter and author Martha Stewart visited Sabancı University's Sakip Sabancı Museum. Stewart toured the exhibition "Legendary Istanbul - From Byzantion to Istanbul: 8000 Years of A Capital" at the Sakip Sabancı Museum with the museum's Chairman of the Board Guler Sabancı, while receiving information from a number of historical authorities.

Stewart came to Turkey for the preparation of a program about Turkey and specifically visited Sakip Sabancı Museum due to positive comments she had heard about the exhibition, although it was not initially included in her itinerary.

Martha Stewart's globally popular show is shot at the NBC studios, and Stewart herself, known as the "queen of life style", is one of the most powerful women in the world. Her show, broadcast on various television networks in the U.S. and in many other countries, including Turkey, Australia, Canada, Japan, Singapore, Dubai, Belgium and New Zealand, has an audience of 33 million people, mostly women. Martha Stewart, known as internationally as a brand guru, has her own publishing, distribution and marketing network, "Martha Stewart Living Omnimedia".

Martha Stewart and her team are in Turkey to prepare a program about Turkey as an initiative of the Ministry of Culture and Tourism.