Full page coverage for Guler Sabancı by the Austrian Kurier... 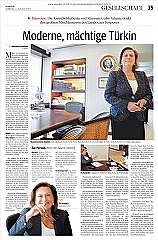 One of the best-selling newspapers of Austria, Kurier published on its Sunday (August 2) issue a full-page interview with Sabancı Holding Chairman Guler Sabancı.  In the coverage headed “Modern, Mighty Turkish Woman” it was mentioned that Ms. Sabancı was one of the most powerful women worldwide.

The interview conducted by Margaretha Kopeinig, one of the editors of the newspaper, gives an eclectic picture of Ms. Sabancı with her business life, leadership properties, and social responsibility activities.

Having started her article with the statements “Located at the heart of Istanbul, two dark-blue glass towers scrape the sky.  The Sabancı Twin Towers offer an overlooking view of the entire city and the Bosporus.  From her office on the 25th floor here Guler Sabancı leads a business empire.  She is the number-one woman at the head of one of the largest companies in Turkey, a country that experiences the modern and the traditional simultaneously”, Kopeinig ended up the introductory part with the phrases: “The Fortune Magazine of the USA ranks her within the highest positions in its list of the most powerful women.  However, Sabancı does not only know business, but is also a dilettante.”

Guler Sabancı answered the question about how she could succeed in the androcentric business world directed to her at the beginning of the interview as follows: “I grew up in a family where the members talked about business while eating.  I assumed positions in the production and organisation following my university education.  However, the point is, to do the best way that what is to be done, and to focus on success.  In business life, women are not better or worse than men.  But women are simply different.  I am of the opinion that it is an advantage for the women that they have more emotional intelligence.”

In her answer to a question about the global economic crisis and aftermath, Sabancı said:  “Now there is a need for better rules for the global capital movement.  We must return to the trust-based banking.  In the society, there will be a new awareness of justice, including the climate protection.  We will change our consumption patterns.  We will use the resources more consciously.  There will be a new balance of power in the world.  China and India are rising.  We will need more regulations in the future.  What important in an atmosphere of crisis is to manage the mistrust and the uncertainty.  We must think of alternative scenarios, have A, B, C, D plans, and implement them promptly.  One must be sensitive and flexible, and have the leadership characteristics in crisis environments.”

SABANCI: “I AM OPTIMISTIC IN THE EU ACCESSION PROCESS”

Sabancı answered the question of Kurier about the EU accession of Turkey as follows: “It is decided to start the negotiations for full membership between the EU and Turkey.  Such process is going on in legal terms.  It cannot be stopped legally.  What is important here is that Turkey does not digress from the path to the full membership.  The continuation of the process will bring benefits to both sides.  At the end you will see how successful Turkey is, and to what extent it has approximated to Europe.  Anybody who has something to say shall talk then, not today.  By the end of the process everybody can judge the matter, including us.  But I am rather optimistic in this respect.”

“IF YOU HAVE WHAT IS ENOUGH FOR YOURSELF, THEN YOU MUST ALSO SUPPORT THOSE WHO ARE NOT AS LUCKY AS YOU ARE”

At the interview Margaretha Kopeinig stated that the Sabancı Group pioneered many Social Responsibility projects as well, and asked why the Group attached so much importance to this point.  Guler Sabancı said in her answer to the question:  “If you have enough for yourself, then you must also help others. That is part of the mentality and attitude of my family.  When my grandfather earned enough in the 1920s, he funded in the village where he grew up the construction of a road and a school.  We too have been continuing such heritage, we have a social responsibility.  This was used to be called a social duty.   In Anatolia, this is a culture that has been existing for centuries.  After the death of my grandfather, my grandmother donated his entire property, and the Sabancı Foundation was established, to which my uncles contributed as well.  My grandmother and uncles have done their best in order to further advance such spirit of benevolence.  Thus, we have today such institutionalised and successful Sabancı Foundation.”