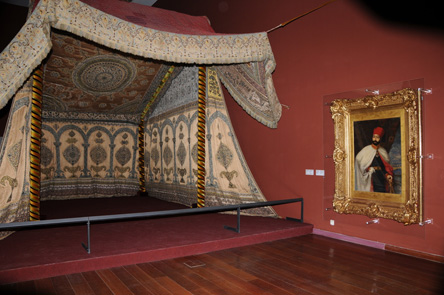 The International Herald Tribune has featured on its web site an extensive review of the "Legendary Istanbul - From Byzantion to Istanbul: 8000 Years of A Capital" exhibition that is currently on display at the Sakip Sabancı Museum. The article by Susanne Fowler titled "8000 Years of History in Istanbul" was presented to Herald Tribune readers on the website's home page. The article also mentioned Susanne Fowler's interview with Sabancı Holding's Chairman of the Board, Guler Sabancı. 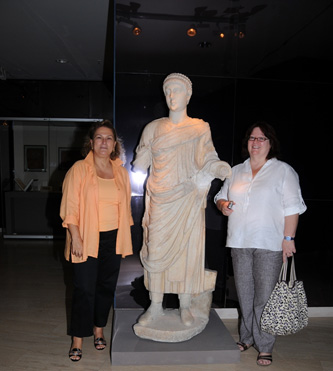 In the first part of her article, Fowler outlined the content of the exhibition "As soon as you enter the "Legendary Istanbul" exhibition, you find yourself in a prehistoric forest, you sit on a tree hollow and watch the formation of the Marmara Sea. This impressive video start is only the first of the amazing visuals and audios in the "Legendary Istanbul - From Byzantion to Istanbul: 8000 Years of A Capital" exhibition which has now been extended until September 26th.  The exhibition, while telling the history of Turkey's capital of culture, takes you from the Neolithic Age (pay special attention the ceramic goddess figurine) to the times that have more recently witnessed the establishment of a vibrant megacity overflowing with energy. The exhibition, curated by the director of the Sakip Sabancı Museum, Nazan Olcer, and designed by exhibition "architect" Boris Micka, with more than 500 pieces from 60 museums including from the Topkapi, Louvre and the Vatican City, allows for a journey throughout the chronology of this city which has been the capital city of various successive civilizations.

After the stunningly beautiful presentations about the history of the Roman, Byzantine and Ottoman Empires, you finally see a giant visual presentation showing the establishment of the Republic of Turkey. This new exhibition, which is based on and improves a similar exhibition previously held in the Grand Palais in Paris last year, includes hundreds of new objects and underlines the ethnic differences within Istanbul."

The article mentions that new items in the exhibition include a Christian icon from Byzantine times that was lent by the Fener Greek Patriarch, a group of Greco-Roman marble statues from the second century which were originally part of a fountain at the tip of the Golden Horn and the magnificent hand embroidered hunting tent that Sultan Mahmut II used when on the hunt. The article goes on to say that "a cosmopolitan unity of religion and language can be clearly seen in the Arabic Bibles dating from the 14th century, in a Bible in Armenian ornamented with rich pictures, and in an Ottoman Turkish dictionary in Hebrew".

The article, which points to the dome room designed by Boris Micka as the most striking point of the museum, states that "with Ottoman music in the background, dozens of colored domes in Istanbul's the churches and mosques are displayed in this cleverly planned area such that the common aspects of beliefs, rather than their differences, are revealed. Guests can sit on chairs, even lean back and watch, for example, how the midnight blue and golden stars of the Hamidiye Mosque in Besiktas turn into 21 distinct domes including that of the Hagia Sophia which was built as a church by the Byzantine Romans in the 6th century."

In the article, the Chairman of the Board of Sabancı Holding, the sponsor of the exhibition, Guler Sabancı's views about the dome room are quoted "The purpose here is to show Istanbul's diversity with its domes that belong to all religions. Micka wanted to bring the domes together and technology enabled us to do this".

It is also mentioned that Sabancı Holding's Chairman of the Board Guler Sabancı said that the exhibition had been extended so that students coming back from their summer holidays could visit the museum: "As far as I am concerned, I would have extend the exhibition for another six months, but the lending museums have their plans, schedules and promises and there is nothing one can do in this case".

The article also states that "This exhibition, also sponsored by the 2010 Istanbul Capital of Culture Agency, brings together an unprecedented selection of Byzantine works".  Referring to disputes between Turkey and Greece in the past, Sabancı's statement was "I understand that these things used to be politically difficult in the past, but when we started to discuss this project two years ago, such matters did not even come up.  Even if no such thing has ever been done before, it was done this time." The point that "developments in Turkey and in the region showed to us that we should not censor ourselves" was also emphasized.