Guler Sabancı, Chairman of Sabancı Holding, was Honored with The Highest Decoration of The Republic of Austria 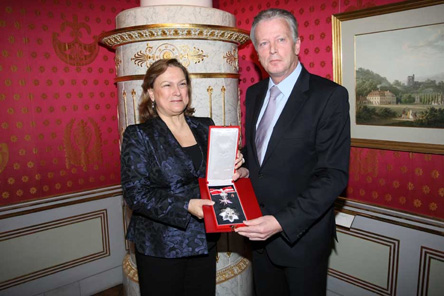 Güler Sabancı, Chairman of Sabancı Holding, was honored with "Silbernes Ehrenkreuz der Republik Österreich", the highest decoration of the Republic of Austria.

Sabancı was presented the decoration by Reinhold Mitterlehner, the Austrian Minister of Economy, Family and Youth.

In her speech at the ceremony, Guler Sabancı stated that she felt honored to be presented with this decoration, adding that this decision of the Austrian Government was affected by the successful partnership between Verbund and Enerjisa. Sabancı further emphasized that Enerjisa became the most valuable energy company of Turkey within a short period of time.

"5 PERCENT WOULD NOT BE A SURPRISE" 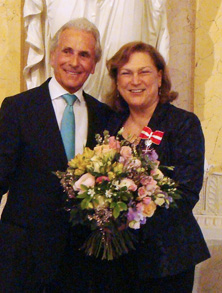 In her speech, Sabancı talked about the developments in the Turkish economy: "Thanks to the radical reforms implemented in the financial sector after the crises in 2001, Turkey is the only country in Europe with a banking system that survived the global crisis without support. Turkey progressed remarkably throughout the decade to establish today a competitive and indeed a very global economy with some 800 BN USD GNP. Turkey took her place among the G20 countries as a prominent emerging market. The international companies such as Verbund which invested in the Turkish private sector has been the main contributor to this stunning growth. It will not be surprising to see around 5% growth this year after a good start in the first quarter. Turkey's geopolitical position, stable and settled democratic state will be the main contributor to the energy supply and security to Europe. Interestingly, Turkey today stands out as one country more in line with the Maastricht rules than most of the EU members."

Sabancı concluded her speech by saying that "By receiving this special honour and this great title today from the Austrian Government, I realize an additional responsibility of working on enhancing the relationship between the two countries and improving both the economic and the cultural activities of both Turkey and Austria."

"SABANCI-VERBUND COOPERATION CONTRIBUTED TO THE RELATIONSHIPS BETWEEN THE TWO COUNTRIES"

In his speech at the ceremony, Reinhold Mitterlehner, Austrian Minister of Economy, Family and Youth provided information about Güler Sabancı's career. Mitterlehner also highlighted that Güler Sabancı is an active figure in social matters as well.

Regarding the Decoration, Minister Mitterlehner said that "the Republic of Austria wishes to honor Ms. Sabancı with the "Silbernes Ehrenkreuz der Republik Österreich". This medal of honor is presented to personalities who have accomplished outstanding achievements and exceptional services for the Republic of Austria. Because of her deep social commitment, her outstanding business achievements, and her pioneering role as a woman in the male-dominated business world, Ms. Sabancı is a worthy recipient of "Silbernes Ehrenkreuz der Republik Österreich".

Minister Mitterlehner expressed that there are many reasons why this decoration was presented to Güler Sabancı and mentioned that Sabancı's accomplishments in the field of economy and studies in the field of philanthropy have played a role in this decision.

Minister Mitterlehner also drew attention to the importance of the Sabancı Holding-Verbund partnership and stated that Austria became the third largest foreign investor in Turkey in 2006 which has significantly contributed to the improvement of the bilateral relations between Turkey and Austria. Minister Mitterlehner said, "The cooperation between Sabancı Holding and Verbund provides an important contribution to ensure the relationship between the governments of Turkey and Austria is improved and the mutual understanding between the two countries is developed".

Verbund CEO Wolfgang Anzengruber also made a speech at the ceremony, emphasizing Sabancı Holding's activities in the energy sector and cooperation with Verbund as well as Enerjisa's position in the Turkish energy market. Anzengruber also highlighted that all objectives of Enerjisa have been attained thanks to Guler Sabancı's great efforts and foresightedness. Anzergruber concluded his speech with these words: "I am delighted with the good relations between our two companies and I am confident that the cooperation between Verbund and Sabancı will continue to be just as constructive and effective in the future".