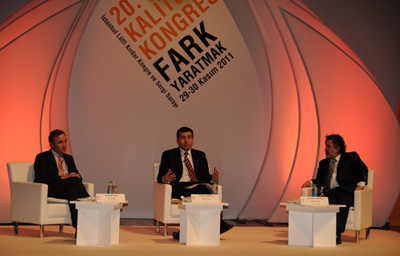 Sabancı Holding Board Chairman Güler Sabancı attended the opening special session of the 20th Quality Congress. Moderated by Uğur Dündar, the session was held with the attendance of Eczacıbaşı Holding Board Chairman Bülent Eczacıbaşı as well. He shared his ideas about the quality journey of Turkey and Sabancı Group, mentioning the approach of sustainability and innovation. 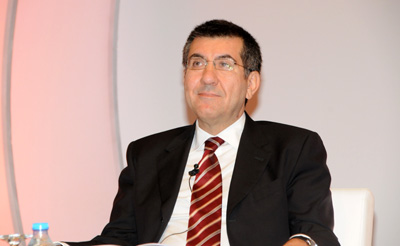 Uğur Dündar asked: "Sabancı Group is an organization that puts significant importance on the area of quality, implementing pioneering advancements. Brisa is the first corporation to attain the Europe Quality Award. How could you manage to ensure that?", and Sabancı answered: "This congress took me back to 90s. Our quality journey was started twenty years ago. Brisa became partners with the Japanese Bridgestone on 1988. That partnership emerged on account of a necessity. Because 80s were the first years that witnessed the baby steps of current "globalization" concept, where mainly liberalization and deregulation concepts were prevalent. When we considered the political will then, the power was in the hands of PM Turgut Özal in our country, President Ronald Reagan in the United States, and Margaret Thatcher in the United Kingdom. Free financial markets were advocated. It was a period when we migrated to fiscal and commodity liquidity. Turgut Özal emphasized the free market economy during the first congress twenty years ago as well. We mainly targeted further growth and increased exportation. This potentiated our economy scale as well as our technology demand. We facilitated a partnership with Bridgestone on account of the necessity arisen for more technological products. This was the first cornerstone on our path to quality. We have learned many things from both our partners and competitors. We learned about Total Quality. However, the quality concept was closely related with "productivity" during those days. That involved the product quality and operational quality. As Brisa, we were granted with the National Quality Award on 1993, even before having been the first corporation to attain the EFQM Europe Quality Grand Prize on 1996. We embarked on this journey long before Europe and we made a difference. "

In consideration of the changes on total quality approach, Sabancı said: "This is an evolution. During the initial steps, quality was controlled. Following production, our teams would inspect the end products and control their quality. Later there was "quality assurance" approach. This approach ensured that the quality is produced in each area. Now, we are going through a stage where every single person is responsible for the quality. Our current stage requires operational perfection. The scope of total quality approach has been expanded. There are many stakeholders within this process".

Uğur Dündar further asked: "There are many significant efforts ongoing as related with sustainability in Sabancı Group. Would you explain us those?" and Sabancı answered: "For the recent period, the environment issue is emphasized quite more. Innovation and sustainability are included in EFQM (Model of Perfection) as well. A more holistic approach is on stage. Throughout all processes, environment and humans took privilege and precedence. The perspective is quite different now. In order to ensure that new technologies are implemented, that they are more efficient and agile, industry-university collaboration is an essential requirement. For the technological developments, the difference could be attained only in this way".

Upon Dündar's statement that there are many signs indicating Sabancı Group's leadership on the area of innovation, Güler Sabancı stated: "I was assigned as the group chairman on 2004. For a duration of one and a half month, we conducted a search conference with 600 senior managers on 2005. We initiated a vision, a new era. For the year 2005, we reinstated the new vision of Sabancı Group as "making a difference", and "leading the industry in each area". We knew that we would attain sustainability if we would do that. We will be able to do that in each area only if innovation is present. We created a climate where the focal spot is innovation, placing emphasis on new ideas. We aimed to lead and go forward all the time. We consider all processes in respect of sustainability. There are many examples that bring joy. Our management approach reflects on results as well".

Answering the question of "Years ago, I remember an interview you conducted with Necati Doğru, during the first years of your career. You stated your aim as 'creating a difference'. How have you maintained your personal philosophy and carried it into your business life?" Sabancı stated: "Time passes. I now see my answer was a bold one. Creating a difference is quite an expanded subject. This is the purpose of our group. If it is not measurable, it won't be improved. Therefore even before creating a difference, our first priority is to change, to have courage, clarity and transparency. Our founder Sakıp Sabancı held onto this approach as well. I am a disciple of his. Considering the years when the Sabancı Towers was first constructed, they were the first buildings with more than thirty storey around the region. At the opening, Mr. Sakıp Sabancı stated: "we are currently the tallest, but taller ones will surely come". This was just how it shaped. However, it was definitely a first. We changed the region completely with those twin towers. A new concept emerged around the world as e-retailership. This concept was already known. But Teknosa was the first corporation to implement this concept in Turkey. A new industry was created in Turkey. It is significant to ensure that the change is sustainable. As Teknosa, we are the first right now. However, the real important thing is that we created a sustainable industry. We built a city museum in Mardin. This was not enough for us and we opened up Dilek Sabancı Exhibition Galleries for more dynamic exhibitions. It changed the looks of Mardin overall. We triggered a series of change. In China, Lang Lang steps up as a pianist, and 40 million Chinese people state their aspiration to play a piano like him. Pioneering requires a decisive act on the uncharted; but through this process, one has to keep an eye on the sustainability as well".

In respect of social policies, Sabancı stated: "A serious educational movement is required on a common, shared basis. My aim is not only to change the existing system. It is essential to establish an educational structure that allows diversities. In alignment with a target oriented industrial strategy, we need an educational strategy that is seriously planned. The focal point should be distinction. Another significant stage is to ensure that technological improvements and investments should be sustained in alignment with the industrial policies, creating new technologies that could be implemented. Industry-university and industry-research collaborations should be initiated. We should be placing emphasis on that process for the future. In respect of innovation in Turkey, we should not settle with being ranked as 69th on the World Economic Forum classifications, and we should attain a momentum on our success. Turkey currently goes through a period that is similar to the time when total quality campaign was initiated twenty years ago. We need to initiate a brand new campaign by placing an emphasis on innovation and sustainability" and finalized the speech. 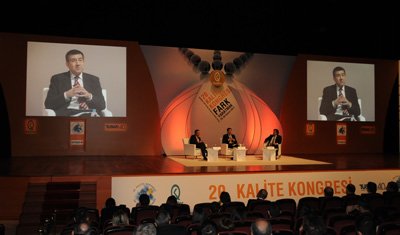