Kordsa Global and Sabancı University will develop future technology together 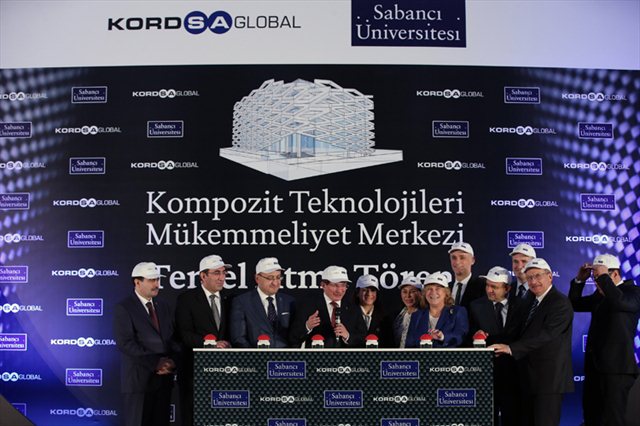 The foundations of the Composite Technologies Center of Excellence which has been established under the leadership of Kordsa Global, one of the affiliates of Sabancı Holding, and Sabancı Foundation and which has been realized with an innovative industry-university cooperation model of Sabancı University were laid at a ceremony attended by top level participants from politics, industry, academy and business world.

Güler Sabancı: We are laying the foundations of the future

In her speech at the ceremony, Güler Sabancı, Chairperson of the Board of Directors of Sabancı Holding and the Board of Founding Trustees of Sabancı University, told that a new dimension was brought to the industry-university model and spoke as follows: “For the first time in our country, we are witnessing the formation of a platform where a material which is an advanced technology product, R&D, academic structure and production will be blended. Now, two Sabancı Community organizations, Kordsa Global and Sabancı University, are starting a new initiative in an area which is extremely strategic for our country. Today, we are actually laying the foundations of the future. Today marks the start of a new period. We are setting out to ensure that our country should make a difference with advanced technology in the global arena and even to become a global power in this area and to become a player of the big league. We are making this investment today not for tomorrow but for the next 10-20-30 years of Turkey. We believe in Turkey and in the potential of our country, and we are making this investment in the future of our country.”

“Today, we are laying the foundations of an investment amounting TRY65 million as the first step. However, with the value it will create and the model it will implement, this center means a lot more than this figure in terms of the new dimension it will bring both to our Community and our country. This model brings a new model to our country. We are implementing the exemplary model which has the potential to contribute greatly to achieving the objectives of the year 2023. With this model, different cultures (student, researcher, lecturer, entrepreneur, engineer) will exist in the same ecosystem, work closely, understand each other’s problems better and will show an effort to find solutions more rapidly with a common mind. They will share the same laboratories, work together in the same working environment and will run faster for common goals. Not in adjoining rooms, but closely, together at the same table, in the same laboratory… Therefore, the university will have a better chance to become a part of the economic structure. I hope the success of this model will set an example for others, those which will be implemented soon. Our objective for the year 2023 is to become one of the top 10 economies of the world. And this objective can only be achieved with an innovation-oriented growth policy. Innovation-oriented growth, on the other hand, is only possible with the design and production of products of high technology.”

An investment of TRY65 million

At the center which will be established with an investment of TRY65 million, postgraduate education, basic research, applied research, product development, production, incubation services and commercialization activities in composite material technologies will be carried out; doctoral students and postdoctoral researchers, lecturers, incubator companies, researchers, engineers and human resources to be employed in the prototype production will exist simultaneously under the same roof.

At the center which will have an indoor space of 10 thousand square meters and a laboratory infrastructure of 3 thousand square meters, Kordsa Global and Sabancı University will create a breakthrough ecosystem which will be brought by collective researches, learning and production. With the advanced-technology production which will be realized by Kordsa Global, the production of materials and composite parts the import of which is subject to permission will be possible at home.

In this innovative model which will be implemented cooperatively by Kordsa Global which has ranked first in both years in the textile sector in the R&D Centers Performance Evaluation conducted by the Ministry of Science, Industry and Technology by covering all R&D Centers in Turkey starting from 2013 and Sabancı University ranking among the top in the Entrepreneurial and Innovative University Index which has been announced since 2012, students, lecturers, researchers, engineers, entrepreneurs, designers will work in the same building towards common goals.