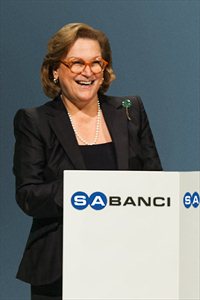 In her message, Sabancı evaluated the year 2014 and expressed her expectations from the year 2015. Güler Sabancı's message is as follows:

While entering the year 2015, we'd like to share with you the global economical and political developments, the status of our country, and our opinions and expectations related to the new year both with a global perspective and Sabancı Group's perspective.

First of all, we see that the world economy still has not fully recovered from the big financial crises of 2008. 2015 is likely to be a year with multi-speed growth rates. For the first time in 6 years, there is income growth across the US economy and is likely to remain close to 3 percent in the New Year.  The same cannot be said, unfortunately, for Japan and the Eurozone. For both, growth remains very weak, with a return to recession a real possibility.

-"LOW OIL PRICES GIVE AN ADVANTAGE TO TURKEY"

Low oil prices are expected to remain the same in 2015. It will help Japan and Europe, and China. It will be advantageous also for Turkey. The conditions brought together with the decrease in oil prices, however, should be well read. Decrease in the revenues of countries exporting oil means an amount of more than 100 billion dollars is being withdrawn from the global finance system.

Considering this together with the "quantitative easing" implemented in America, we see that it will be harder to find liquidity particularly in the developing markets.

China, which has been a major contributor to world growth, is clearly slowing down. This slowdown is indeed one of the major reasons for the oil price decline. From averages of 9 percent, Chinese growth is heading towards the 6 to 7 percent range. This is still very rapid growth, but it does represent a significant slowdown in the second largest economy in the world.

In addition to the economic challenges in the global arena; we see that the growth rate of our country progress between 2.5 and 3 percent for the last few years. These figures, unfortunately, are well below of both our needs and potential.

The regression observed in our growth rate, however, is the result of the unsteady economical atmosphere in the world, mistrust to the growth markets, and lack of sufficient investment due to low amount of national savings.

While all such progresses are observed in the economy, very upsetting incidents continue in the Middle East, in Africa.

The geopolitical position of Turkey, particularly being an intersection point in energy, gives us an advantage, and a great potential.  However, what happens particularly in the Middle East makes us worry. The political developments in the Russia-Ukraine line are of particular concern to us, and directly affect us in many areas.

But we should avoid desperation despite everything. In a continuously globalizing world where the borders become indistinct, countries with high development power, like us, have to continue with their advancement in growth and development, and set an example for and support the countries struggling with challenges.

Following two elections in 2014, we will have the general elections next year. As one of the most fundamental requirements of democracies, we hope the elections will be held with democratic maturity without increasing the polarizations.

In this context, we consider it as a positive approach that the government has established a long term action plan, although the next year is the year of elections. This roadmap gives us hope for the future.

The year 2015 is considered as a "transition year" for a period without elections. In this context, this "transition year" offers us opportunities with the oil prices expected to remain low and with the steps to be taken for implementing the targeted long term reforms. We are expecting the prioritization and implementation of the action plans announced with the government's long term perspective soon, and the year 2015 to become the first step of a new development move.

In addition to this, the G20 presidency taken over by Turkey and the B20 meetings to be held in Turkey are of vital importance both for our country and the global business world. With the works to be carried out, policies and practices to be generated in 2015, we believe Turkey will exhibit a significant leadership. We believe hosting G20/B20 is an opportunity for the publicity of our country, and we will do our part as the Group.

During the year 2015, we must spend our energy to the new constitutional law, the steps and reforms to be taken on the road to the European Union. Focusing on understanding the needs in our education system, providing solutions, and reinforcing the role of women in the society will ensure that we progress successfully in the journey to the targets for the year 2023.

With a long term perspective, we consider the resolution process as one of the most important constituents contributing to both our social and economical development. We should have an integrating approach that elevates equality for all of our citizens, and contributing to a democratic atmosphere. As we have highlighted in our message for the Republic Day, we must run to our targets by embracing differences, in unity, and without losing the feeling of "we".

Extraordinary developments in the technology and innovation field during the recent years have started to reveal the qualified labor needed through successful entrepreneurs. Turkey can only overcome the "middle income trap" by increasing the quality of education, as well as with innovation and creativity. It is particularly required to concentrate more on STEM (Science, Technology, Engineering, and Mathematics), to increase the abilities of youth in this area, and to encourage them.

Sabancı Group companies keep their entrepreneur souls alive, and achieve enormous successes in the field of technology and innovation. Composite Technologies Excellence Center, which we have laid the foundations recently and brought a different model to the industry-university cooperation, is a living proof of our efforts in this field.

While entering the year 2015, we should underline that our most valuable "ore" is technological development. Today, innovation, advanced technology and sustainability have become three integral concepts which the companies, who want to have success in the global trade arena and to maintain their success, make no compromise of.

We should act under the guidance of these three concepts in order to create a difference in the industries we are operating in. We opened our eyes to a brand new world where smartphones, practical applications and digital tools have monopolized our business and social lives during the recent years. We are learning to keep pace with this new world, and to take quick actions that meet the changing expectations. This may be the biggest test of the corporate formations in today's world. Only if we succeed in this test, it will be possible for us to generate ideas and products adding value to our lives by correctly determining the needs, to offer new solutions with new models, and to leave a livable world heritage to the future generations.

The Republic of Turkey proceeds to its target to become one of the top 10 economies of the world by the year 2023, where it will celebrate its 100th anniversary. As Sabancı Group, we are on the job once again in order to create a more effective Turkey providing a determinant contribution for creating the technology of the future with a stronger, more productive, and more hardworking attitude.

As the first company from Turkey signing the United Nation's "Women's Empowerment Principles", Sabancı Holding has set reinforcing the role of women in business life and society with all of its companies as one of its most important targets. We will continue to lead Turkey in this matter with both our women's labor in our companies exceeding the average figure of Turkey, and with intensive efforts of Sabancı Foundation and the projects reaching to various segments of the society.

Our Group had a successful year. This source of pride is the joint work of all of us. We continue with investing in all the industries we are operating in, including energy, as well as growing and creating value. As one of the locomotive and leader organizations supporting the Turkish economy, Sabancı Group will continue to invest in people and to build the world of the future, with the power it receives from its valuable employees and with the excitement and happiness of succeeding together.

I thank you all for your efforts, and wish you a healthy, peaceful and joyful year with your families.