On the 7th Anniversary of His Death, the Life of Sakıp Sabancı was Commemorated at his Final Resting Place 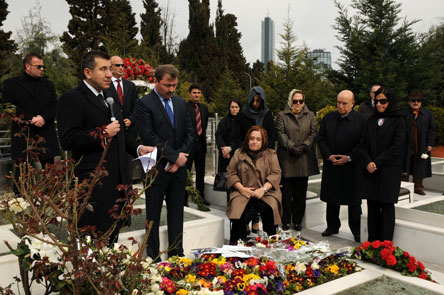 The life of the late Sakıp Sabancı, the former Chairman of Sabancı Holding, was commemorated on the seventh anniversary of his death with a ceremony held at his final resting place.

Sabancı Holding's CEO, Mr. Zafer Kurtul, presented a speech during the ceremony: "For the last seven years we have worked to develop the Group by keeping alive the vision and values that he set out for us. Throughout his whole life, his vision of Turkey was always ahead of its time. Not only was he an accomplished businessman, but a broad-minded sage. In his book "Turkey, Changing and Developing" he expresses talks about our times:

-Turkey is continuously developing, making our situation better every day. Turkey is growing every day. Each day, the Turkish people gain access to better opportunities than the day before. The common pursuit of the statesman, the businessman and the citizen is the guarantee of faster growth and development for Turkey.- If Sakıp Sabancı could see the situation in our society and Turkey today, he would undoubtedly be both proud and honored.'

Mr. Kurtul continued: "Mr. Sakıp Sabancı used to advise us: ‘work as if you will never die; be prepared to die tomorrow.' As the Sabancı Group, we endeavour to enhance and develop the success that he achieved during his life time with both determination and enthusiasm. The whole of Turkey misses Mr. Sabancı as much as we do. He won their hearts, but not just because of his deeds as a businessman: he presented what he had earned in the business world back to Turkey and the Turkish people in a foundation, a university and in other numerous areas. As a homme-du-people, he is enshrined the Turkish peoples' heart. The most significant inheritance that Sakıp left us is, perhaps, the reputation, love and respect that the Sabancı Group earned through his personality. We, the Sabancı Group, will continue to work with a sense of responsibility, we will develop our country's economy, and we will enhance its social life, all to keep the memory of Sakıp Sabancı alive."