On the 8th Anniversary of His Death, the Life of Sakıp Sabancı was Commemorated at his Final Resting Place

The life of the late Sakıp Sabancı, the former Chairman of Sabancı Holding, was commemorated on the eighth anniversary of his death with a ceremony held at his final resting place.

Sabancı Holding’s CEO, Mr. Zafer Kurtul, presented a speech during the ceremony: "For the last eight years we have worked to develop the Group by keeping alive the vision and values that he set out for us. Besides being a tremendously successful businessman, he was also a visionary of broad perspective. 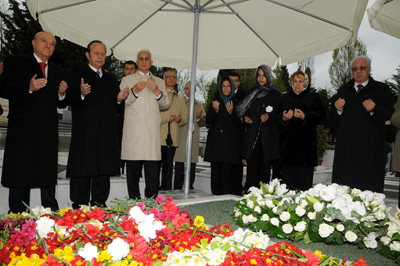 His words in his book "Changing and Developing Turkey" sheds light on the current day: "As businessmen, we shall continue to do our work, to invest and to continue our search for more efficient and greater production.  We must do this.  This is our country.  We will also develop and be happy once this country develops and its people are happier".  The deceased would have been undoubtedly very happy if he could see how Turkey and our community has developed to become what it is today. Sakıp Sabancı used to say that he believed "as human beings our responsibility is to benefit from the gifts of our world prudently and to perform our duties against our families, communities and work continuously and seriously". I have trust in all Sabancı employees to adhere to this principle in their work. Because the deceased shared his earnings from business life with our foundation, our university and with Turkey and Turkish people in numerous other areas.  He was a man of the people and it was because of this he was seen as Sakıp Ağa in the hearts of his people.  As Sabancı Group, we are aware that keeping Sakıp Sabancı's memory alive is only possible through building on our country's economy and community and we will continue working on that."