On the Tenth Anniversary of His Death, the Life of Sakıp Sabancı was Commemorated at the Ceremony Participated by his Friends

-“HIS LEADERSHIP WAS BASED ON LOOKING AT THE FILLED PART OF THE GLASS, AND ENCOURAGING OTHERS TO FILL THE EMPTY PART OF IT. “

-“SAKIP SABANCI WAS OPEN TO DIALOGUE IN EVERY TOPIC, AND HE WAS AGREEABLE. HE WOULDN'T SEPARATE, BUT WOULD UNITE”

-SAKIP SABANCI'S GRANDDAUGHTER MELİSA TAPAN: “MY GRANDFATHER TAUGHT ME A LOT ABOUT LIFE. HE WAS THE PERSON TO SHOW ME THAT THE JOY OF HELPFULNESS WAS NOT COMPARABLE TO ANY OTHER ACHIEVEMENT” 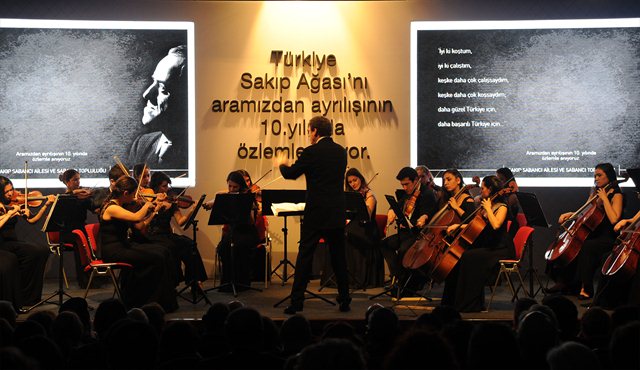 Sabancı Holding Chairperson Güler Sabancı expressed in her speech: “These 10 years without Sakıp Sabancı were very long since we are without him, but were also very short because commemorated him all the time, honoring him and his memories. As you all very well know, one of his most significant characteristic features was his extremely contagious positive energy. That intelligent and encouraging energy he somehow managed to find even in the most desperate moments... He had a very high level of empathy ­- he would never give away to despair. His leadership was based on seeing the filled part of the glass, and encouraging others to fill the empty part. This fairly new management style called “coaching” was something he naturally did, approaching others in a way that will reveal their potential and making them successful. He loved humans. He would attach importance to everyone, approach them with love, make himself felt special for others, listen very carefully, and touch others.”

Güler Sabancı continued to her speech: “Sakıp Sabancı was open to dialogue in every topic, and he was agreeable. He wouldn't separate, but would unite. We was an expert and finding common ground.

There is a memory I remember about TÜSİAD: After a long time, the late Bülent Ecevit visited TÜSİAD. Sakıp Sabancı welcomed him with a smile, and said:

“Mr. Ecevit, we are not looking at the world from the same window. We may have very different opinions in a lot of topics, and we may not be able to agree very easily. However, there is a topic that we can agree on and that we are on the same side. And that is, our love for our country.” Ecevit smiled and said “you are right, Mr. Sabancı” and relieved TÜSİAD members. Just as Secretary General Mr. Nedim Bozfakıoğlu said at his final resting place on behalf of his coworkers, “Everyone loves their country, and he also did. But the important thing is how much your country loves you!

Sakıp Sabancı was very open to innovations. He would take interest in all sort of new things, he would ask about and follow innovations. And he wouldn't do it alone - he would appreciate learning with others. One day, he gathered us and asked: What is the Internet? What improvements can it bring us? He asked for a presentation and wanted everyone to listen to it. At the end of the meeting, even though all those statements that weren't very convincing to us, he was the one that believed in this thing most. He had a website for himself in 2002. In 2013, 9 years following his passing away, 45 thousand people visited his website.”

“Communication, sharing, sincerity, transparency... These were things he loved, and gave Sakıp Sabancı his real characteristics. He would see these as tools ­ what he actually strived for was reaching, touching and loving people, and being loved by them in return. He had written 14 books, sharing his thoughts and emotions. If he were living today, he would definitely be on Twitter, Facebook and Instagram.

It might be strange for us that as a man who loved life this much and wanted to value every moment of it, Sakıp Sabancı prepared his will regularly and with the same excitement and enthusiasm, shared these with his friends, and revised it upon others' recommendations. However, for Sakıp Sabancı, preparing his will was like planning the continuation of his life and his projects. And his will was based on “people.” It was based on touching people, making a difference in their lives, and therefore, keeping himself “alive.”

-HE CONTINUES TO SUPPORT US IN EVERY FIELD THROUGH HIS FUNDS

In her speech, Güler Sabancı stated that Sakıp Sabancı had established a fund within the Sabancı Foundation, and he had donated shares to this fund and the other fund he had established in the university.

“Through the foundation, many permanent works made for him and family members are being regularly supported. After his passing away, especially thanks to support by Dilek Sabancı, the Mardin Sakıp Sabancı City Museum has been completed, triggering the changing of the old city of Mardin. The Sakıp Sabancı Kandilli Education and Culture Center, for which he signed the protocol while he was in hospital, started operations in 2007. Donating his whole collection during his life, Sakıp Sabancı enabled the establishment of Sakıp Sabancı Museum at Atlı Köşk, under management by Sabancı University. He always desired the Sabancı Museum to be managed with a perspective of advanced museum administration, and host international exhibitions. The Picasso Exhibition that he much desired was hosted 6 months after he passed away. It was an achievement that went beyond the borders of Turkey.”

Güler Sabancı said that besides all of these, funds established by Sakıp Sabancı support a successful student, athlete, artist and scientific study through award programs. Also touching upon the efforts at Sabancı Holding after Sakıp Sabancı's passing away, Güler Sabancı said: “In the last 10 years at Sabancı Holding, thanks to support by Erol Sabancı and our Board of Directors, we have been carrying the flag higher and higher.

After him, we adopted energy as our new business branch. Sakıp Sabancı would say “non-existent energy is the most expensive one!” He wanted Turkey to develop, always searched for the better in this journey, aware of the role of energy in Turkey's development. He was delighted when we established Enerjisa in 1995, congratulating us especially due to its name. He put his hands in our shoulder, and said “Enerjisa is an energizer for us.” Right now, together with our partner E.ON, Enerjisa is the largest private electricity company. Not only in production but also in distribution, following Başkent, we acquired Ayedaş and Toroslar, reaching 9 million customers. Sakıp Sabancı would definitely be delighted if he knew we reclaimed the electricity distribution of Çukurova region.

-HIS GRANDDAUGHTER MELİSA TAPAN: “MY GRANDFATHER TAUGHT ME HOW TO BE HAPPY WITH THE SIMPLE, LITTLE THINGS”

The late Sakıp Sabancı's granddaughter Melisa Tapan also had a speech, talking about his grandfather. Tapan said: “I played with him at Atlı Köşk's garden. I danced before him for hours. He introduced me to art, collections, calligraphy and sculpture at a very early age. He showed me that the joy of service and helpfulness is not comparable to any other achievement. When I was with my grandfather, it felt like the time stopped. Together, we would roll around, run after pigeons, ride the motorcycle in the garden, and mowed the grass. My grandfather taught me how to be happy with simple, little things. It is also my grandfather who taught me that nothing is impossible, and that I shouldn't be afraid of making mistakes.” Tapan concluded: “My grandfather's passing away is a grave loss to me, just like it is to this country and other people. His biggest legacy is the love of the people ­ of his friends, coworkers and other people.” The commemoration ceremony was concluded with the concert by Turkish Youth Philharmonic Orchestra, supported by the Sabancı Foundation for six months. The commemoration night was participated by many well known people from the art and business world.