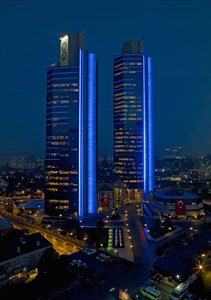 Give a Blue Light campaign is being put into effect with the efforts of Tohum Autism Foundation. In the scope of campaign, alongside with Sabancı Center, including especially the symbolical structures such as Bosphorus Bridge, Fatih Sultan Mehmet Bridge and Kadıköy Bull Sculpture in the first place, many business districts and hotels are also draw attention to autism with blue lights.

Last year, about 10,000 buildings in 136 countries were illuminated with the color of autism, the blue light.