Sabancı, Closed 2015 with 2 Billion 236 Million TL in Net Income, and is Energized For The Future 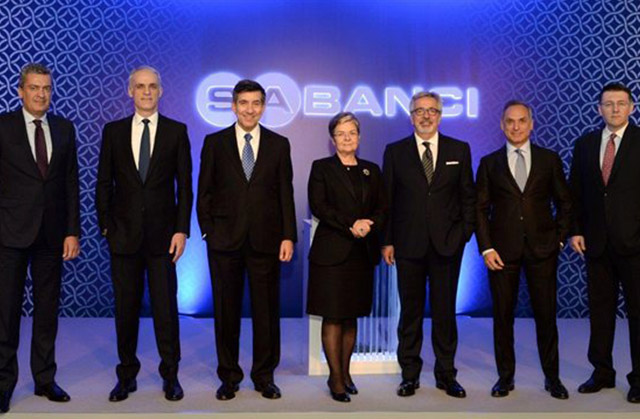 ZAFER KURTUL, CEO OF SABANCI HOLDING: "WE BELIEVE IN OUR COUNTRY, WE CONTINUE OUR INVESTMENTS"

"IN THE LAST FIVE YEARS, WE HAVE INVESTED ALMOST 11 BILLION US DOLLARS. IN 2016, WE WILL INVEST 5 BILLION TL"

Sabancı Holding has announced its financial results for 2015. Accordingly, the combined net sales of 2015 are 47.9 billion TL, and the consolidated net income is 2 billion 236 million TL. The combined nonbank EBITDA (earnings before interest taxes, depreciation and amortization) of Sabancı Holding for the same period is 4.5 billion TL with an increase of 41%.

Assessing 2015 and results of the Group in a press conference, Zafer Kurtul, CEO of Sabancı Holding stated the following: “2015 was a very successful year for us. It has been a year in which we have achieved successful results in all sectors in which we operate. We have raised our consolidated net income by 8% to 2 billion 236 million TL. In the same period, we raised our non-bank combined EBITDA to 4.5 billion TL with an increase of 41%.”

Kurtul continued as follows, “We believe in Turkey and continue our investments” “As Sabancı Holding, we have invested nearly 11 billion US Dollars mostly in Turkey in the last five years. Our investment in 2015 alone was 3.7 billion TL.”

Referring to the plans for 2016 in the meeting, Kurtul stated: “For us, growth, profitability and creating value for our investors will be our priorities also in 2016. This year we will invest 5 billion TL most of which will be in the energy sector. We continue on our way with confidence in our country as the “Sabancı of Turkey.” This year we will continue to grow by maintaining our focus on profitability in each of our businesses. We are expecting to grow 10 to 15% in our non-bank combined sales, 20 to 30% in our non-bank combined operating profit and 40 to 50% in our Energy segment operating profit. In our roles as “pioneer” and “role model” in each sector we are in, we will continue to strive and achieve our goals in 2016, leveraging our innovative culture and operational excellence skills.

Regarding the activities in the energy business, Kurtul said, “As Enerjisa, we achieved net profitability by increasing our operational profit by 119% and successfully managing the currency risk of our financing for investments in 2015. The new tariffs in the renewable energy law will have an important positive impact in 2016. Enerjisa supplies the electricity of 1 out of every 4 people in Turkey. This is an indicator of the size that Enerjisa has reached. So far, we have made an investment of 11 billion USD with Enerjisa. In the first half of 2016, we will increase our installed power by 48% to reach 3700 MW and focus on operational excellence.”

Giving information on the developments in the energy sector, Kurtul continued his words: “We consider the recently announced 2016 -2020 tariff and methodology for electricity distribution positive, since it provided clarity about the future. This will lead to investments to better serve the customers and allow Turkey to better utilize its resources by decreasing the theft and loss ratio.”

“Despite the steady domestic demand and shrinking export markets last year, our cement companies continued their strong performances. Our companies raised their combined annual net income by 19% in 2015; while the compounded annual growth rate for the last five years is 26%. Afyon Cement Factory, in which we have invested 165 million dollars, will commence operations this year. In the white cement category, in which we are one of the two largest producers in the world, we gave the green light to the investment that will increase our production capacity by 35% in Eskişehir Çimsa Factory. Our cement companies continue to invest in sustainability and reinforce their differentiation in this area in the sector.”

-A PROFITABILITY RECORD IN THE INDUSTRIALS IN 2015

“Our investments in our industrial companies have given us strength in new customers and new markets in 2015. Last year, we achieved record profits and grew.”

“In addition to launching 8 new products, Temsa bus segment achieved record levels in production and exports leading to a 39% increase in operational profitability. Temsa, in addition to its strong position in Europe, has strengthened its position in the US. In 2016, we are expecting the number of Temsa buses sold to the US market to exceed a thousand. Our buses in the US transport the Silicon Valley employees and it makes us proud to have a brand from our country on the roads of the US. On the other hand, Brisa, which has increased its profitability in the last five years by an average of 28% annually, has maintained its market leadership with an operational profitability record in 2015. In Aksaray, our second factory investment of 300 million US Dollars continues at full speed. Kordsa Global maintaining its focus on decreasing its costs by lean manufacturing and increasing productivity, reached its full capacity utilization targets at its 100 million USD factory in Indonesia, which became operational in 2014. The net income of the company rose by 29% compared to 2014.”

Referring to the activities of Sabancı Holding in retail, Kurtul stated, “With Carrefoursa, we made an investment of 900 million TL in 2015. Our sales reached 3.9 billion TL with an increase of 26% compared to the previous year. Carrefoursa and Kiler completed their merger process by the end of the year. We think Carrefoursa will significantly benefit from the synergy opportunities of this merger. Carrefoursa grew more in 2015 than it had achieved in the last decade. In 2016, we will focus on reflecting this growth to profitability.

Teknosa, which is positioned as a single-stop product, service and solution provider, increased its online sales by 50%. Teknosa sells 5 out of every 10 smart TVs, 4 out of every 10 smartphones, sold in Turkey. This shows that Teknosa has an important position in technology retailing.”

-AVIVASA IS THE SECTOR LEADER WITH A PENSION FUND SIZE OF 9.1 BILLION TL

“The leader of the private pension sector, Avivasa, has increased its fund size by 29% in 2015. The private pension sector, which is still in the early growth period, will play a very important role in increasing savings ratio in Turkey. In 2015, Avivasa shares appreciated by 23% and its market capitalization came close to 2 billion TL. Aksigorta, on the other hand, continued its growth focused on selective insurance categories last year. In this context, share of the premiums of the non-motor category in the portfolio has increased 7.5 percentage points and reached 52%.”

Stating that Akbank has been selected as the most valuable banking brand of Turkey for five consecutive years, CEO of Sabancı Holding said, “Akbank, has raised its total assets by 15% to 252 billion TL in 2015. While continuing its growth, Akbank has kept its non-performing loans ratio below the sector average at 2.2%. In terms of digital banking, in Akbank, one of the leading banks of Turkey, 92% of the transactions are now made outside of the branch. With strong financials, qualified human resources and digitalization investments, Akbank is one of the highest growth potential banks of Turkey”

Touching on the importance placed on human resources, Kurtul stated that they have provided 8 thousand new jobs since 2012 and continued, “Sabancı Group is a very young organization with an age average of “33.” In Sabancı organization, we attach particular importance to the employment of women. Philosophy of “equality at work” is one of our values that we defend and lead. Our ratio of women to men in our new recruitments is 50%-50%. Our ratio of internal promotions is around 75%. In particular, our organizational backup plan is of great importance for us. We train many of our own leaders internally. As a Group, we are a big family and as a member of this family, I am happy to see that we invest in our employees.”

Addressing the works of Sabancı Foundation, Kurtul said, “The Sabancı Group is one of the leading organizations that serve the economic and social development of our country. We share our commercial strength with our community at large, through our social and environmental endeavors led by Sabancı Foundation and Group companies in their social and cultural sponsorships. Seeing the impact of the works carried out by the Sabancı Foundation for 42 years everywhere in Turkey makes us happy. Since its establishment, our foundation has created more than 120 permanent works in 78 centers of population throughout Turkey, granted scholarships to more than 42,500 young people, supported the projects for creating equal opportunities to the women, young people and disabled and supported active participation of these people in the society with the grant programs. We continue to serve our country with all our strength with the responsibility of being Sabancı of Turkey.”