Sabancı Golden Collar Awards are Given for the 6th Time 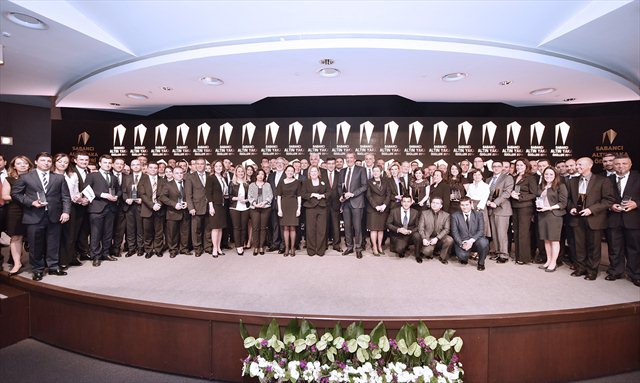 The winners of Sabancı Golden Collar Awards which is held sixth time to reward the success of Sabancı Community company and employees and to encourage sharing good practices, have received their prizes with the ceremony which was held on 29 April Wednesday in Sabancı Center. The award ceremony which is presented by Cem Davran is held by the participation of Sabancı Group Chairman of the Executive Board Güler Sabancı, CEO Zafer Kurtul, Human Resources Group President Neriman Ulsever, Community managers and employees.

This year Akcansa was the first place in the category of Value Drivers in Sabancı Golden Collar Awards which is given in 8 different categories. As the first prize in Equity at Work and Investment to Human categories went to Brisa, first prizes of Productivity went to Temsa Global, and of Innovation and Corporate Entrepreneurship, Cimsa was awarded. For the Market Oriented award Akcansa was the first place for individual subcategory and Cimsa was for the corporate subcategory. AkSigorta and Energysa teams were the first place in Synergy category. Akcansa was awarded for Digitalizing which is the category awarded for the first time. Sabancı University and Sabancı Foundation were awarded with Honour Prize because of their contributions to Sabancı Golden Collar Awards.

In her opening speech Sabancı Group Chairman of the Executive Board Güler Sabancı, stated as follows: "We have started to distribute the Sabancı Golden Collar Awards 6 years ago, in 2009. It gained a successful place thanks to you. In 2009 when we have started Sabancı Golden Collar Awards, I have also said. This awards are the beginnings of our travel to excellence. And I am happily saying that this travel are going on with your enthusiasm, excitement, participation and protection. Golden Collar Awards where Sabancı Community companies inspire each other and share their experiences and knowledge accumulation, is your process, your awards, your success. As stated previously, there is a new category in our 8 categories: Digitalizing. In digitalizing category, there were 53 project applications from 9 companies. That was such a high participation that we can understand this subject is so internalized by our society. Digitalizing is reforming the work style in all sectors and also effecting our private life. Therefore, we are departing with such a category. We believe that you will be successful and this brings us success. We focus on human in all of our activity sectors. Sabancı Community researches for human, works for human, produces for human. We proving that we value human in a nice way thanks to Sabancı Golden Collar Awards. Golden Collar is awarding valuable ideas, projects and works of Sabancı employees that aim to add value human life. However as I always say, noone loses in Golden Collar Awards. There are prize winners but as a result we all win. We learn together, we reach better together and win together".

CEO of Sabancı Group Zafer Kurtul stated in his speech as follows:"Sabancı Golden Collar Awards is a vital project which drives the future, strategies of our community. We picked the categories as the ones which is suitable for us and support our strategies. Each year we renew them. We have added the category of digitalizing this year. In whichever sector we are, there are a lot of trends which effect our businesses; wide spreading internet, mobility, cloud etc. We need to consider deeply the effects of those trends to our business".

Kurtul continues as follows, "2014 was a good performance year. Our combined net sales has increased 23%. Our consolidated net sales has increased 20%. In 2014, we made 3 billion TRY investment 57 percent of which is in energy sector. Our employees recruited in our community has exceeded 60 thousand. Integration works of Ayedas and Toroslar region which are newly taken over by Enerjisa are maintained. Three new plant will be enabled in 2015. Carrefoursa had a very good year in retail. As we take over the management, face of Carrefoursa has changed. Our company's sales has increased over 20% and for the first time since 2008 moved into net profit. Developed Mini market format has succeeded. Kliksa provides around 10% of the Teknosa's turnaround. We have opened the shares of Avivasa to public in November 2014. This was the largest and most successful public offer of the last 1 year thanks to its 1,7 billion lira value. 2014 was a quite successful year also for the Sabancı Group Cement Group companies. Afyon Cement is starting up a new factory investment, it will cost 165 million dollars. Capacity increment in production plant of Kordsa Global Indonesia was completed and opened in January. This plant is the largest investment of Kordsa Global out of Turkey. In December, Composite Technologies Excellence Center is founded in collaboration of Kordsa Global and Sabancı University. We will continue to invest without slowing down in 2015. In this direction, our number of employees is also increasing".

Sabancı Group Human Resources Group President Neriman Ulsever stated the followings in her speech;This awrding platform which is formed 6 years ago is renewing, developing, changing and transforming each year. In the 6 years; with this platform, we are analyzing our ecosystem better. We combine our strengths more. We began to think out of the box and we naturalize innovations. We focused on creating permanent values by taking our shareholders and customers into the center. We have enhance, developed and progressing on excelling our processes and systems which is contact to our most valued source. With this platform we have added value of millions to our Community each year. We have learnt from each other and shared with each other thanks to the projects came to this platform. Golden Collar is effected from change, is changing and getting rich. I would like to thank wholeheartedly to all Golden Collar Project teams and Project Managers. They are carrying this responsibility devotedly with volunteering basis. After this night, they will start to review each category for the new period, they will adapt the context of categories according to changing conditions, they will consider evaluation processes and they will prepare a new Golden Collar Awards for the next year, more mature, more updated, more effective and more focused. Last year, we had promised to Mrs. Güler, it was to spread and reward entrepreneurship in our Community. We kept our promise and we have added 'corporate entrepreneurship' into our 'innovation' category. For us corporate entrepreneurship is to create business models driving values, focusing on needs and contributing our financials with our valued employees' new and creative aspects. This year we bring another novelty to the Golden Collar Awards, we built a category named 'digitalizing' which is storm through the world. We have 116 project application this year in 8 category. Application number has increased 35% when comparing to last year. Each project was prepared with a huge effort, active team work and with a good system and methodology. All projects are produced with the thought of sustainability and as a contribution to profit growth of companies. I should say that, this year's synergy projects were between companies and even between SBUs/Different sectors when comparing to last years. With one sentence; This year was the year of all star teams! Each company, each project was stars".