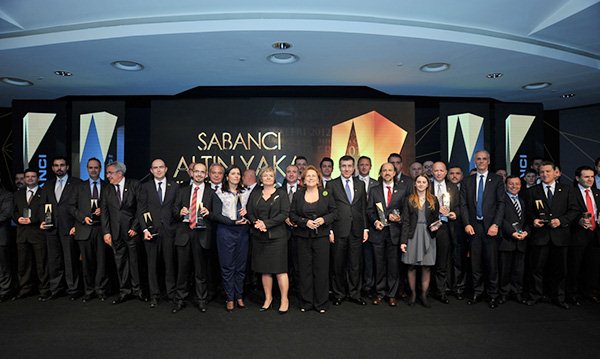 The winners of the Fourth Sabancı Golden Collar Awards, a competition conceived to reward achievements of Sabancı Group companies and employees and encourage sharing best practices, received their awards at a ceremony held at the Sabancı Center. The ceremony was attended by Sabancı Holding Chairperson Güler Sabancı, the company’s CEO Mr. Zafer Kurtul, HR Group Chairperson Neriman Ülsever, the group’s managers and by employees. The ceremony was hosted by famous showman Beyaz. Approximately 600 employees from various Sabancı Group companies attended the awards ceremony.

There were six categories this year at the Sabancı Golden Collar Awards. Teknosa won Value Creator Award, which is the top prize in Sabancı Golden Collar Awards whereas Brisa won the Market Orientation award. Investment in People award went to Akçansa. In the categories where individual or teams competed, Sasa was awarded for Efficiency and Kordsa Global for Innovation. The individual achievement award for Synergy went to Enerjisa while corporate subcategory award went to Akçansa, Çimsa and Kordsa Global.

Sabancı Holding Chairperson Güler Sabancı said in her opening speech: “As Sabancı Group, we are accustomed to receiving awards and I am proud of this. Significant changes occurred in the early 90s around the world. Total quality, journey to perfection, and quality awards emerged. Brisa won the first quality award in Europe. Therefore, we are accustomed to receiving awards not only in Turkey but in Europe. In 90s, we always improved ourselves with these awards such as total quality, work perfection, and operational perfection. In 2008, a big crisis broke out in the world. In 2009, we started to think, “There has to be a way to fight this crisis.” We must shake ourselves and find a new point of attack, a new source of excitement. We are so big in scale that we can give our own awards, own Oscars for the experiences and management styles of our colleagues. My friends supported the idea and designed and developed all stages of this award. They are working on this project in addition to their regular duties. This is Sabancı Group’s very own award. When we are searching for the better, for the perfection together, we are trying to choose the best. The reason why golden collar awards create such excitement is that my colleagues love their jobs, that they always want to do better, and that love success. This is why we are always successful in Sabancı Holding.

Awards are a result and a compensation for our work. However, we are on a journey. There are no stations on this journey. Sometimes we slow down and give awards, but the journey continues. This is a long and successful journey. But there are not losers in the end. We are winning together. Turkey is winning with us.

Sabancı Holding CEO Zafer Kurtul made a speech during the ceremony in which he said that he saw the future of Sabancı Group at the ceremony, and that he was very excited about it. Kurtul said, “Sabancı Group has a very bright and successful past. However, it is more difficult to be successful in the future. But tonight I saw that Sabancı’s future will be very successful too. We achieved very good results last year. We were very successful in terms of growth, profitability and share performance. Sabancı Holding shares rose 80% in 2012 and outperformed Istanbul Stock Exchange – 30 with a wide margin. Market value of Sabancı Holding exceeded USD 12 billion. The underlying reason for this increase is the performance of Sabancı Holding’s subsidiaries, in other words, your performance. The most critical element in success is human resources. The most valuable asset of the Sabancı Group is the human resources. Therefore, developing human resources is very important and is everyone’s responsibility.

Zafer Kurtul stated that it was a very intense year for Sabancı Holding with regards to investment and added, “Last year we invested USD 1.6 billion, whereas the figure will rise to USD 2 billion this year. Growing and creating values is very important.”

Sabancı Holding HR Group Chairperson Neriman Ülsever said, “In business life, there are white collar, blue collar, and Golden Collar of Sabancı Holding. Golden Collar is an innovative and unifying concept which was developed in 2008. Today, Golden Collar is a super identity, a platform. It is a process in which we share the success and best examples, and where the companies compete each other. Everybody desires to win, but there is no loser here. Because we are all winning, learning and sharing on this path. For me, this is the most distinctive feature of Golden Collar.”

Sabancı Group has a vision. Therefore we have some essentials. Today, it is impossible to imagine a world without innovation, or an organization which offers values to its stakeholders. All my friends are aware of the distinction of being the Sabancı of Turkey. We have to contribute to our country. An organization which is not focused on people cannot be successful. However, the world is changing. Today, “equality” is the top item in our and the world’s agenda. As the Sabancı Group, we have introduced many international initiatives in this area since the beginning. We have had a leading position in these matters. Therefore we can expand the “Equality at Work” concept to offer more equalitarian conditions where she is more independent economically and is able to pursue a career and is more active in social life.”