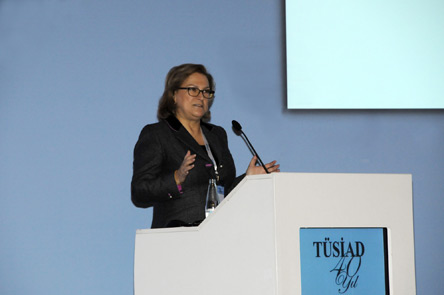 Thank you very much for inviting me to the "Woman in Business" conference held by our "Equality for Women and Men Study Group" which is a part of Tüsiad's Social Works Commission.

Our Study Group is led by my classmate Nur Gervar. 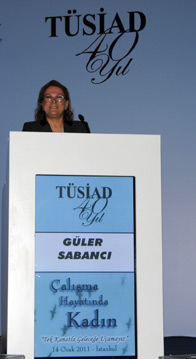 Today, our Association has 69 female members.  This constitutes 12 percent of the total number of our members.  I was the first female member of TÜSİAD in 1984.  It is pleasing that this number is increasing, although slowly.

Dear Nur, how many female students were there when you and I graduated from Boğaziçi University, The Faculty of Economics and Administrative Sciences in 1978?

And how many of them began to work?

I guess not more than half of them.  I checked the statistics for the last year.  828 female students and 928 male students graduated.

And, the majority of female students either began to work or continued with their academic careers.

This means they took initiative.  They are engaged in a field they chose.

It allows you to see how often two distinct words have been used in all the books published throughout history.

Thus, you can see the trends through generations, or analyze the "zeitgeist" as they say in German.

When we search the words "Man" and "Woman", you would be surprised to see how rarely the English word "woman" was used until the early 1800s.

And when you search the words "work" and "woman", you see that the word "woman" began to be mentioned with "work" only in the early 1900s.

That means, as the late Duygu Asena said, women really had no identity until very recently.

As in the rest of the world, introduction of women to the workforce market in Turkey did not arise from developments in the labor market or economy-based factors, but on the contrary, it has been the result of necessity

Women's participation in the workforce increased during the World Wars.

Nonetheless, when men were discharged after war, the majority of women returned to their traditional lives again.

Recently I was at the Heidelberg University.

14. Founded in the 14th century, the university accepted its first female students at the end of the 19th century.

In Turkey, the first higher education institution for girls was opened in 1914 under the name 'İnas Darülfünunu'.

Also, in 1922, seven female students enrolled in the faculty of medicine.

Considering the facts so far, in Turkey, women's participation in the workforce, gaining social rights and rights to work, and taking their natural positions in society generally took place in parallel with the rest of the world.

Furthermore, development of women's rights in Turkey in the first half of the last century was faster than it was in many European countries.

Without doubt, this development occurred thanks to Atatürk and his reforms.

In reality, women in Turkey began to take their place in the workforce market after the 1950s as a result of urbanization caused by migration.

In time, women's position in the workforce market and their working styles also changed.

How this change took place in terms of sectors is an important issue.

Because the distribution of employment based on sector and gender in a country is an important indicator of that country's level of development.

With industrialization, employment decreased in the agriculture sector, while it increased in other sectors such as in industry and the service sectors, even if not to a desirable level.

As it can be seen in the successful and impressive movie we have just watched, the present situation is unfortunately not very bright.

But we need to search for solutions together and work on this without losing our motivation.

First of all, we need to increase women's influence in politics and the economy.

There is still a lot to be done for women in employment, social and political issues.

There is an election process ahead of us.  Our political parties need to show sensitivity in this matter.

Women's branches of our parties are enthusiastic about this matter.  They work hard.  And the leaders should also support them.

I believe that, as Meral Tamer wrote the other day,

if we can turn the next general elections into an opportunity for women with the public's support,

if more women take place in the parliament,

if a parliament that is more sensitive to women's issues is formed,

our country will gain big momentum on the way to becoming a more democratic and prosperous country!

In recent years, foundations, non-governmental organizations (NGO), universities and many voluntary organizations in our country have been working in projects that will help our women to be more active and participative.

I would like to congratulate KAGİDER, for which many of you serve, for its valuable work on women's entrepreneurship.

Their support for female entrepreneurs, their programs and their research provide benefits not only for women, but also for the whole of Turkey.

Besides, all this work should not be considered as being done for women only.  It is this point of view that should be corrected first.

The development of women, their right to take the place they deserve in society and the benefits of this should be explained clearly.  This is a duty for all of us.  And today we are at this meeting aimed at this purpose.

Within this attitude, we, as Sabancı Foundation, have a project called "The Common Program for Protecting and Developing Human Rights of Girls and Women" carried out in cooperation with all UN agencies, Ministry of Internal Affairs and Sabancı University.  This project includes six cities in Turkey.

We believe that raising awareness of girls and women in Turkey in relation to human rights and rights for equality laid down by the laws is the beginning of everything.

We, as Sabancı Foundation, have established our focus points to be women, the disabled and the young.  The NGOs we work together with, work very hard and achieve successful results in their focused projects.

For example, the girls who have had the chance to return to school.  The mothers who are hopeful for the future and work with great effort. The women who go to computer courses without even knowing how to use mobile phones.

In this project we cooperate with local administrations.

As a result of this project women's equality desks have been created in all governor's offices and municipalities.

And NGOs for women look after these equality desks.

The number of NGOs for women has significantly increased in these regions.  Is it enough?  No!

We need to work harder.  However, we are learning how to carry out a project, follow a project and measure its results.

In order to make progress in protecting and developing the human rights of girls and women it is necessary to educate the administrators and men in that region.

In many projects men are also educated on gender directly or indirectly.

These types of projects should be extended to all parts of Turkey.  Each and every one of us travel in our country.

May I kindly ask all of you to visit local equality units in governor's offices and give feedback to Sabancı Foundation which would definitely throw light on our work.

I would like to touch upon another point: It is not appropriate behavior for people like us in the business world to complain and lament about how everything is going terribly wrong.

We should take heart from good examples and perpetuate them.

We should appreciate what has been done and at the same time draw attention to and follow up what hasn't.  This is our duty!

I would like to talk a little about corporate life as well.

As of 1980 women began to increasingly participate in business life in Turkey.

Within the last 20 years, we have seen that women's positions in organizations have risen as well as their number and ratio in business life.

In the past women were expected to be "manlike" in order to enter business life which was known as a "man's world", however, today we see that women are aware of their femininity and gain power as a result of this awareness, their traits and differences.

The last crisis also showed that in men traits such as risk-taking and desperate competitiveness may actually result in disaster.

Before the financial crisis many successful companies began to focus on such management methods required in the global world as cooperation and networking instead of patriarchal hierarchy.

Women have an inborn advantage in such traits.  Because empathy and risk avoidance, which are generally considered as women's traits, are very effective in preventing crisis.

However, being risk avoidant does not mean being completely against development and progress.

Women do not hustle.  They think, ask, consult, empathize and then they finally take action.

They are less aggressive and more collaborative.  They are less competitive but give more importance to partnership.  They are less power-oriented but more inclined to team work.  These are not only my opinions, academic studies and Human Resources researches also display these results.

Prudent management succeeds only if it can use these different competences in different projects.

I think most of you knew the late Sakıp Sabancı.  My uncle Sakıp was my mentor and the most important supporter in my business life. He was a successful leader and good at how to be successful.  He said to me:"I can only open the door for you.  You are the one who will enter through the door, stay inside and be successful."

Now, I would like to address all the men in business life, all you businessmen: "Open the doors!"  If women are not successful, men also could not be so.  If you want to be successful, give a chance to women, OPEN THE DOORS!

Before I end my speech, I would like to give some advice to women in business life.

The first one is: Never give up.  Do not lose heart!  Business life is difficult; it is even more difficult for women.  Accept it. Work hard and be patient. Persevere. Stand your ground.

The second is: Reach out to people.  Ask for help.  Ask for advice.  Consult them.  Ask questions.  Don't be shy of it because what is important is to obtain the correct result.

The third one is: Keep smiling even under the most difficult conditions, even if it is very difficult for you. Grit your teeth and keep smiling!

I would like to thank you one more time and congratulate you for bringing up this issue to the agenda at the beginning of the new year.