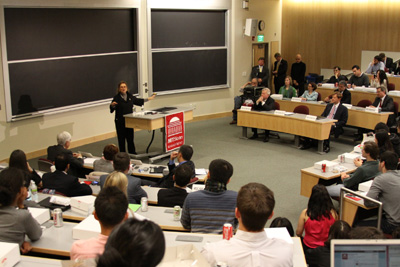 Sabancı Holding Chairman Güler Sabancı spoke at a conference in the Innovative Leaders Series at the Sloan School of Management at the world renowned Massachusetts Institute of Technology (MIT).  Sabancı shared the milestones of her career and her experiences in the last thirty years of Turkey with the audience.  Güler Sabancı said that the Sabancı Group was founded by Hacı Ömer Sabancı and Sakıp Sabancı led the group for 38 years after Hacı Ömer Sabancı's death in 1967, adding that Sakıp Sabancı achieved the transformation of the group.

Sabancı said at the beginning of her speech that she started her career in 1978 and said "I wanted to work at Lassa, our tire manufacturer.  Lassa was a new company and the tire industry was a new enterprise for the Sabancı Group.  I wanted to specialize in one area and grow with the company.  That I set as my goal."

Sabancı talked about the difficulties Lassa had to go through in 1978 because of the financial crisis in Turkey and said that this made her learn the importance of crisis management from the very start of her career. She continued: "This showed me the importance of being a part of a team: communicating freely, exchanging ideas with colleagues and the fact that the team is much stronger than individuals. Hasan Güleşçi was appointed to lead Lassa as the most experienced professional in our company.  He created four functional assistant general manager positions. I was assigned to one of those positions.  We discussed openly how to conduct our business, came to decisions and made sure those decisions were implemented without any compromise.  Our first step was to remedy the broken lines of communication between different departments of the company.  Then we focused on the product: we improved its quality and manufactured only products that we could sell.  We increased our product range and then focused on specialization.  This was a crucial turning point and was a significant milestone in my career." 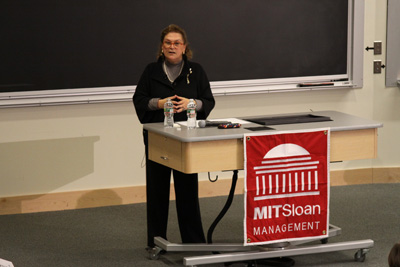 She pointed at the start of a new period in Turkey in the 80s with Turgut Özal and said: "We as Sabancı have adapted and supported this new economic approach.  We were one of the first companies to bring foreign investment and partnerships to Turkey."

Sabancı said she was appointed as the General Manager of cord fabric manufacturer Kordsa in 1985 at the age of 30 and said "The 80s were a period of working together and collaboration for Sabancı.  We followed Turkey as it opened to external markets.  The first 50-50 partnership was started in the 80s.  I lead the partnership negotiations and I learned a lot from that.  My foremost learning was the importance of reconciliation skills and I had the opportunity to improve my skills."

"One thing one must know about partnerships: one should expect the worst but prepare for the best.  Partnerships are a team play.  Your partners are both your allies and also your competitors until you arrive at an agreement.  But the ideal is to become allies with your partners once the partnership is established. At the start of our plans to form a partnership with Belgian Beakaert, there were differing opinions on who the boss will be in the 50-50 partnership.  My uncle Sakıp believed in the idea of "The project will be the boss".  Therefore you must leave your ego at the door when entering a partnership and put your faith in the project"

When the coalition governments of the 90s brought economic upturns, "we faced new challenges with the arrival of the 90s" said Sabancı.  Globalization efforts accelerated with the fall of the Berlin Wall.  The Customs Union treaty between Turkey and the UE brought a whole new dimension to competition. We had foreseen these developments at Kordsa, where I was working as the General Manager, as an international company with global tire giants among our clients and started working on it. Challenging but fair competition and demanding customers make you better. Therefore we started investing heavily in quality, efficiency improvements and new technologies .  We made huge investments and put a lot of work in Total Quality and Job Perfection.  I saw that it is exceptionally important and crucial to feel that all members of the team are essential for the task at hand.  In order for them to feel that they have contributed to the final outcome, they must be allowed to contribute in the process."

"From our point of view, we can say that we have achieved good results in this.  Brisa won its first quality award in Europe, which was followed by Kordsa winning the same award the following year. After that, other companies I led won many quality awards in Turkey."

Güler Sabancı said that Kordsa transformed into a truly international company in the same period and said "one of the keys to managing global diversity is to 'think globally and act locally'. It is now easier to do this.  But then we had to do a lot of thinking of what to do globally and locally".

Güler Sabancı continued by saying: "In parallel to all this, we witnessed the start of another project I led: the foundation of our own university.  We had in mind to found the university for the new millennium as we approached it.  We chose search conferences as the methodology in this. We used similar methods in the reformation of Sabancı Foundation as well as the Sakıp Sabancı Museum.   All three are now leading institutions in their fields."

Sabancı stated that she was appointed as the Tire and Tire Reinforcement Materials Group President and continued by saying: "one other major transformation in the 90s was the restructuring of our group.  As a result of this restructuring, strategic groups were established to include related and linked businesses under the same umbrella and I was appointed to lead one of those groups".

"I was elected as the Chairman in 2004 after the passing away of my uncle.  Every leader has their own tool of choice. My special tool was the search conference.  We got together once more, this time to discuss the shaping of our company's future. Finally we decided to focus and divested four business areas out of nine and focused on five areas.  We added energy as a new business and transformed into a company focusing on marketing.  We differentiated our performance criteria in HR and completely changed the face of the Sabancı Group."

She said that prior to her visit to MIT, she talked to Professor Oğuz Babüroğlu, who conducted all search conferences for Sabancı Group in the past and ended her address by saying:  "I asked Mr. Babüroğlu what my management style was  His response was ‘Transformational Leadership'.  He shared with me what he saw as key components of my leadership style: