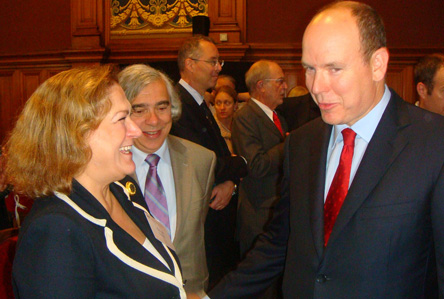 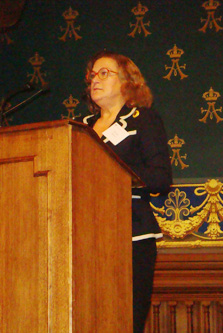 The MIT Energy Futures Conference, organised by the Massachusetts Institute of Technology, was held in Monaco and focused on such issues as climate change and the increase in global energy demand.  The conference was held under the auspices of Prince Albert II of Monaco, who, along with his Prime Minister Michel Roger, also made a speech at the event.  Chairman of Sabancı Holding Guler Sabancı was the keynote speaker at the event. Her speech, titled "Turkey's Role as an Energy Crossroads" focused on global and regional energy politics, the rise in global demand for energy, and Sabancı Holding's investment plans in the sector.

- "Over the next century, energy - how we achieve it, how we distribute it, and how we use it - will be of utmost importance to global economy, global security and the very future of our planet."

In her speech, Guler Sabancı said: "Over the next century, energy - how we achieve it, how we distribute it, and how we use it - will be of utmost importance to global economy, global security and the very future of our planet.  We are already pushing the limits of the world's energy resources.  The risk of supply-demand mismatch threatens all Western economies. According to July figures released by the U.S. Energy Information Administration, global marketed energy consumption is expected to increase by 50 percent from 2007 to 2035.  Under this projection, total energy demand in OECD countries will rise by 14 percent, compared with an increase of 84 percent in non-OECD countries.

Sure, the global economic downturn has had an immense impact on global energy demand.  But that's clearly very short term.  Consumption will exceed its pre-crisis levels very soon as the world economies recover fully from the effects of the recession.  The energy game is currently not sustainable either environmentally or from a supply security point of view.  And yet, in the next 20 years, demand for global energy resources is projected to increase significantly as populations, economies and consumption rates grow."

-"The world must develop alternative sources of power"

Sabancı also talked about the possible disputes that might take place in the sector over the next century. "Creating a sustainable, competitive, and environmentally sound energy system is the major challenge of the century.  To cope with rising demand, there is a need to vastly scale up energy infrastructure investments and regionalize energy markets across borders.  This requires an unprecedented level of intra-national cooperation and investment.  This requires a truly an unprecedented level of intra-national vision, policy, and strategy.  And the place for this is the G-20.

The world should heed the lessons of the recent global financial crisis.  In order to avoid a similar global energy crisis, we must formulate, through the G-20, a common vision and common regulations.

The rise in demand for energy resources, especially natural gas, may lead to three possible scenarios.  The first, agreeable one, depends on innovative technologies' making new sources of energy, such as shale gas, more easily available.  This diversification would help to curb the West's rapidly growing dependence on oil and gas imports.

An alternative second scenario would be more challenging.  Fuelled by increasingly ambitious market forces of emerging giants like China and India, global demand skyrockets in an alarming fashion.  Development of alternative sources of energy stalls due to financial as well as environmentalist pressure, especially in the West.

More likely, the next few years will see a third scenario: a combination of both these alternatives.  The world will need to strengthen its ability to cope with supply crises through alternative energy, develop and expand intra-national energy grids, and improve the functioning of the domestic markets."

- "Turkey is an energy bridge connecting the commodity rich economies of the East and the advanced markets of Europe."

Guler Sabancı also referred to the increasing role Turkey plays in the global energy sector: "Turkey's role as a European energy hub is natural.  It's located between 70 percent of the world's oil and gas reserves on one side, and one of the world's largest energy markets on the other side.  It is an energy bridge connecting the commodity rich economies of the East and the advanced markets of Europe.  To put it simply, Turkey is an essential component of Europe's energy security."

As per Sabancı: "Major pipeline projects, both in operation and under construction, enhance Turkey's defining role as a gas and oil transit country.  Currently, the Baku-Tbilisi-Ceyhan crude oil pipeline runs through Turkey, carrying Azeri and Kazakh oil to the Mediterranean. This is the central component of the East-West Energy Corridor, which we call the sılk road of the 21st century. The second component of this new Silk Road involves the transfer of gas into Europe.  So pipelines remain key to securing Europe's gas supply.

It is an open secret that Europe wants desperately to tone down its dependence on Russian gas.  Europe's answer to this is Nabucco, which will pass through Turkey, to connect the Caspian region, Middle East and Egypt with Bulgaria, Romania, Hungary, Austria and the Central and Western European gas markets.

If Europe wants Nabucco to become a viable pipeline rather than remain as a pipedream, it needs to plan carefully.  Europe must develop a more diligent approach taking into account all suppliers, including potential suppliers.

Sabancı Holding chairman Guler Sabancı also talked about the company's plans and energy investments.  "This is a brand new exciting phase in the Turkish energy sector.  And, as a private initiative, we at Sabancı, are at the forefront.  We believe that in our region, but especially in Turkey, markets will continue to evolve with the necessary reforms to attract private investments.  We have firsthand experience of it in electricity, where through EnerjiSA, our integrated energy utility joint venture with Austria's Verbund, we control the electricity distribution of the vast Ankara region at the heart of the country.

In the very near future, energy trade will be not only between states, but also individual companies or syndicate consortiums. For instance, once we finalise all our projects by 2015, we will cater for around 3 bcm or 8 percent of the total Turkish natural gas demand.  Just to put it in perspective: Bulgaria's annual consumption is 2.5 bcm. And Switzerland's and Greece's are around 3 bcm each.  This is why my team is constantly studying projects to secure this and closely following recent developments."

- "For the sake of the whole world, we must cooperate"

And one of the best ways to achieve this is through academic and research cooperation.  Further cooperation between universities, companies, and countries is of benefit and interest of all parties involved."