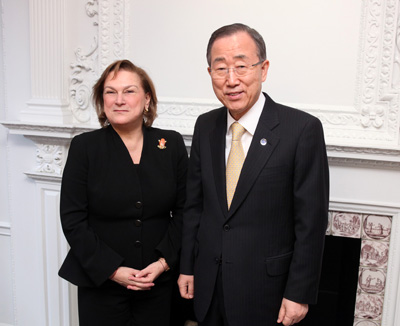 Sabancı Holding Chairman Güler Sabancı has been assigned as the member of the Board at the United Nations The Global Compact. With more than 7.000 business participants and other stakeholders in over 130 countries, the world's largest corporate sustainability initiative The Global Compact Board is chaired by United Nations Secretary General Ban Ki-moon. With its representatives from the business world, civil society, labour and employees, the board functions as UN's highest level advisory body. As the board member, Güler Sabancı will participate in the initiatives to improve the partnership between the United Nations and the business world, to ensure that the specific compact principles are complied with, as well as providing strategical consultancy in alignment with The Global Compact principles.

Other members to stand alongside Güler Sabancı include Paul Polman the CEO of Unilever, Kurt Bock Chairman of the Board BASF SE, Charles O.Holliday the Bank of America Chairman, Jean-Guy Carrier Secretary- General of the International Chamber of Commerce, and Toshio Arima the Director and Executive Advisor to the Board of Fuji Xerox. Sabancı is the sole Turkish member of the board. The member candidates to be defined by the recommendations from the Nominations Committee as well as the local organizations, are assigned by Ban Ki-moon, the Secretary General of the United Nations. Consisting of 31 members, the board stands for the regions all over the world as well as a wide range of industry sectors.

In addition to being a member of The Global Compact Management Board, Güler Sabancı is still the first and only woman member of European Round Table of Industrialists, the first Turkish member of International Business Council, which is the advisory council of World Economic Forum, and the only Turkish member of MIT (Massachusetts Institute of Technology) Energy Initiative International Advisory Committee.

Having undersigned The Global Compact of the United Nations in 2007, Sabancı Holding has also hosted the Annual Local Network Forum in 2009, where a range of representatives meet from all over the world. Furthermore in 2011, Sabancı Holding has been the first Turkish company to undersign the United Nations Women's Empowerment Principles, which was initiated by The Global Compact.