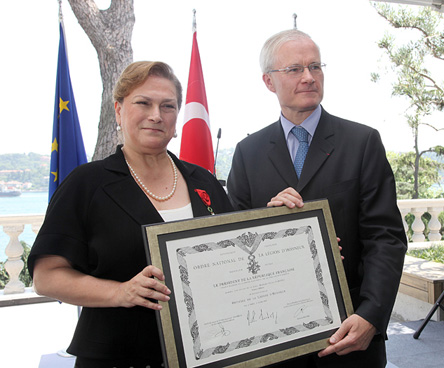 Sabancı Holding Chairman Guler Sabancı was honored with the Legion d'Honneur decoration of the Republic of France by Bernard Emié, Ambassador of France in Ankara, with a ceremony held at Sakıp Sabancı Museum.

Ambassador of France in Ankara, Bernard Emié read the message of the French Minister of Economy, Industry and Labour, Christine Lagarde, who was unable to attend the ceremony.

In her message, Lagarde said; "The story of the Sabancı family began with your grandfather, Hacı Omer Sabancı. Your grandfather transformed the family cotton picking enterprise into a small business in 1932, and then to a textile factory in the following years. This core business evolved and grew under the management of your uncle Sakıp Sabancı, transforming into Sabancı Group, a large group of companies owned by the family. As the 3rd generation of the family, there is no doubt that you have inherited your grandfather's dauntlessness. You have been loyal to his memory and climbed up all the steps in the family business one by one thanks to your personal talents. You have transformed this company into an international group, keen on positive relations with France.

In her message, Christine Lagarde mentioned Guler Sabancı's career journey and reminded that, she was appointed as the Chairman of Sabancı Holding when she was only 49 years old.

In her message, Lagarde underlined the partnership between Sabancı Holding and Carrefour: "Your partnership with Carrefour, the last of your collaborations with French companies, earned an undoubted success: every year, more than 75 million Turkish citizens shop from 470 stores of the market leader CarrefourSA. Your group has also made two commercial investments in France via TemSA, conducting business in automotive industry, and AdvanSA, the first polyester manufacturer in Europe. I hope you will be making further investments in France in the future, a country where your cordial relations are have surpassed the economic framework".

Lagarde have also mentioned Güler Sabancı's efforts in wine production and the French seedlings she brought from France. In this regard, Lagarde pointed out that "Viticulture is sort of a challenge in Turkey, just like in France. However, this is not the only field you would like to contribute to. You also make significant contributions to the development of higher education and culture in Turkey. These are two fields France has always been passionately committed to".

Lagarde continued: "Sabancı University was founded in 1999 and 3500 students receive education at three faculties of the university. This is a unique university with regards to its design. It provides a unique education based on a project culture and teamwork, promoting a sense of social responsibility in students and giving priority to interdisciplinary approach in Turkey. The best business schools of France were also not mistaken in this regard. I am happy with the partnerships developed between ESCP-Europe and EDHEC, and Sabancı University. Student exchanges between our countries starting from higher education will be a significant advantage for our common future".

Regarding Sakıp Sabancı Museum, Lagarde stated the following: "The international reputation and success of this museum is testament to the success of your family and way of life. Sakıp Sabancı Museum, situated on the Bosphorus, is an extraordinary reflection of the artistic dynamism in Turkey throughout the last centuries. France has an important position here as well. This is not only evident by the famous horse sculpture dated 1864, located in the museum garden of Louis DUMAS, but also by the cultural and scientific cooperation agreement between Sabancı and the Louvre Museum in effect since 2008. In this context, it would be impossible to omit the exhibition « From Byzantine to Istanbul: Habour of two continents », one of the most symbolic collaborations in France-Turkey relations. This exhibition, opened by Mr. Gul and Mr. Sarkozy past October, was the starting point of events organized in Paris within the framework of Turkish Season in France. More than 250,000 people visited this exhibition held in Grand Palais near Champs-Elysées".

In her message, Lagarde also mentioned Sabancı International Adana Theater Festival, hinting that "Odeon National Theater of France could be the guest of this event next year".

Lagarde concluded her message by the following words: "Dear Guler, you are an active, modern, sophisticated and epicure lady. You are a role model for Turkey and all women. Due to your exemplary achievements in your life, the Prime Minister of France has decided to honor you with the Légion d'honneur decoration that was created by Napoleon Bonaparte for awarding individuals providing extraordinary services as well as with the "Officier" rank directly. This has now became a family tradition that was initiated with your uncle Sakıp Sabancı when he received the same decoration personally from Prime Minister Jacques Chirac on November 16th, 2001".

- Guler Sabancı: "My responsibilities have increased even more" 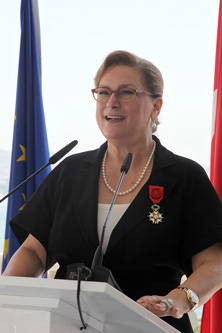 In her speech, Sabancı Holding Chairman Guler Sabancı said, "This is a very honorable and happy day for me. I feel honored to receive such a decoration from the Republic of France, whose art, intellectuals and wine I have always admired although I am not a Francophone, and where I had the opportunity to do business with important companies. I would like to thank my friend Mr. Ambassador, Bernard Emie and Foreign Affairs Minister Bernard Kouchner for their efforts and the authorities of the Republic of France for deeming me worthy of this honor.

I am aware that my responsibilities have increased with this honor. We know that we have the opportunity to achieve positive developments, especially between our countries, while we also have problems regarding the European Union. I know that I have undertaken the responsibility to contribute to our relations during such a period. However, I love to work, to be constructive and to achieve. Thus, I will strive harder to contribute to the rapprochement between the two countries with the motivation this honor has bestowed me with".

Guler Sabancı had received decorations from Italy in 2002 and in 2007, she was honored with the "Leopold II Commander Decoration" by the President of the Belgian Senate, Armand de Decker for her contributions to economic relations between Belgium and Turkey.  In 2009,  "Encomienda De Numero Decoration", Spain's highest decoration of merit, was presented to Guler Sabancı by Elena Salgado, second deputy prime minister of Spain, in a ceremony held in honor of King Juan Carlos I for her contributions to the relations between the two countries. And finally in April, "Silbernes Ehrenkreuz der Republik Österreich", the highest state decoration of the Republic of Austria, was presented to Guler Sabancı by Reinhold Mitterlehner, the Austrian Minister of Economy, Family and Youth.