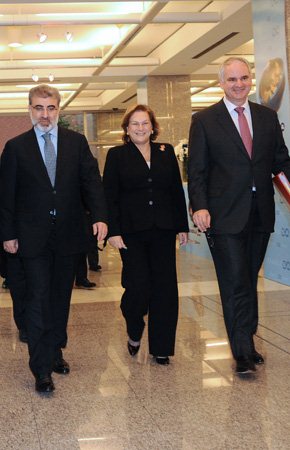 Sabancı Holding’s partnership with one of the world's largest private energy companies E.ON created a huge stir in international press.

Financial Times covered the news extensively and announced it on its web site with the headline “E.ON pushes into Turkey with Enerjisa deal”, the print version used the headline “E.ON partners with Enerjisa as part of strategy to seek opportunity in emerging markets”. The article says: “German E.ON, one of the biggest utilities in the world, is taking a half-share in Turkish power company Enerjisa as part of its strategy to seek opportunity in emerging markets to make up for problems in low-growth western Europe”.

The article also says that the transaction, valued at about €1.5bn, will take the form of an asset swap with Verbund, the Austrian utility. It will trade its 50 percent stake in Enerjisa.

The article also says: “Johannes Teyssen, E.ON CEO, said the Turkish deal would offer growth perspectives that would make up for gloomier trends in its traditional markets and added that they expected Enerjisa to increase its stake in the fast-growing Turkish electricity market from about 4 per cent to 10 per cent by 2020.”

FT article added a statement by E.ON CEO Johannes Teyssen: “Turkey, Brazil, North America and Russia are on our growth agenda. We will focus on these countries in the coming years. Teyssen said Eon will invest about €200m a year in Turkey and that Enerjisa planned to increase its generating capacity from 1.7GW to about 5.2GW in 2015, after which the Turkish utility should then be able to finance a new push to 8GW by 2020 .”

- GÜLER SABANCI: “TURKEY IS GROWING; ENERGY IS A LONG-TERM BUSINESS FOR US”

The article also included statements by Sabancı Holding Chairwoman of the Board Güler Sabancı: “Turkey is growing. This is a long-term business and we have a very long-term perspective on this.”

Financial Times said that the liberalization of the Turkish energy market has been complicated in recent years by financing problems, notably by bidders proving unable to come up with funds they had pledged and added that Güler Sabancı is confident such difficulties were being overcome, partly because of a regulatory approach focusing more on interested parties’ equity and commitment.

Financial Times concluded the article with this statement: “Güler Sabancı said that the transaction with Eon paved the way for Enerjisa’s more ambitious targets and would also give Enerjisa a bigger role within Sabancı’s overall portfolio.”

- JOHANNES TEYSSEN: “TURKEY IS ONE OF THE FASTEST GROWING COUNTRIES IN THE WORLD”

Financial Times' German edition announced the deal with “E.ON Learns Turkish” and included Johannes Teyssen’s remark “Turkey is one of the fastest growing countries in the world and its energy demand shows very strong growth”.

Leading German daily Frankfurter Allgemeine used the headline “E.ON has big plans on the Bosporus” to announce the deal and said that Enerjisa has a huge strategic significance for E.ON.

Süddeutsche Zeitung announced the deal to its readers with the headline “Escape to the Bosporus”, said that Enerjisa has a huge strategic significance for E.ON and commented that E.ON's entry into this deal is a sign of its desire to push into safer markets to compensate difficulties in the domestic market.

The leading German finance daily Handelsblatt announced the deal with a headline in Turkish saying “Eon Goes to Turkey” and said that the Enerjisa partnership with Sabancı Holding is a milestone in E.ON’s growth policy.

- HANDELSBLATT: “GÜLER SABANCI IS USED TO SUCH ACHIEVEMENTS”

Handlesblatt also included an article about Sabancı Holding Chairwoman of the Board Güler Sabancı. The article said that Ms. Sabancı is one of the most powerful women leaders in the world, has been Sabancı's Chairwoman of the Board since 2004, and is now used to achievements such as the deal with E.ON. The article said that Güler Sabancı spends some of her time for charity and education and is the most powerful woman in Turkey. However, the article also said that Sabancı does not like this definition and says “I'd rather be known as successful””.