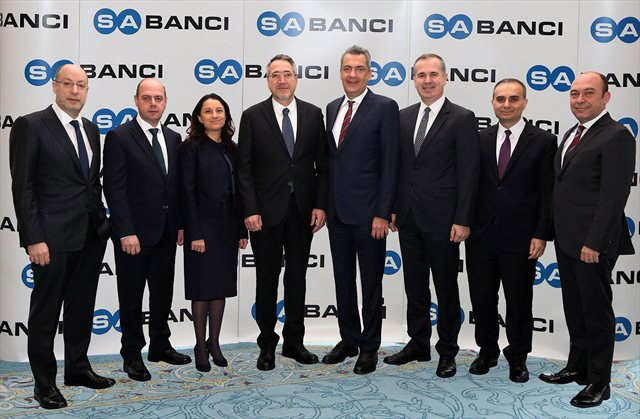 The third quarter results of 2016 show that Sabancı Holding Industry Group registered a revenue of 8.3 billion TRL and had 780 million TRL net profits with its 8 industry companies including Brisa, Kordsa, Akçansa, Temsa, Temsa Construction Equipment, Temsa Motor Vehicles, Çimsa, and Yünsa, employing 18,000 employees overall. The Industry Group has exported to 110 countries with its 8 companies, amounting to 773 million dollars. These companies also operate through their affiliates in 12 countries.

Indicating that they will continue their growth with new investments in 2017, Hacıkamiloğlu continued: "We will invest 1.5 billion TRL in 2017. We aim at 10 billion TRL total income and achieving 1 billion dollars in exports."

WE ARE TURKEY’S SOURCE OF PRIDE IN MANUFACTURING AND INNOVATION

Evaluating the activities of Industry Group in 2016, Hacıkamiloğlu expressed the following about the group companies: "Kordsa, manufacturing with its 3,500 employees in 5 countries and exporting to 42 countries amounting to 162 million dollars, has 407 patents and 128 inventions. With its R&D work and value creating inventions, Kordsa has been granted the Best R&D Center Award several times by the Ministry of Science, Industry and Technology. The Composite Technologies Center of Excellence brings Kordsa  and Sabancı University together and assumes a leader role for the cooperation of university and industry in Turkey. 80 doctoral students and 10 professors are working on R&D in the center.

Brisa is another global brand of us with its 5000 points of sale in 63 countries. It aims at 200 million dollars of exports with its 2,600 employees. Brisa has increased its international competitive capacity especially with our own brand, Lassa, and has demonstrated strong growth in the European tire market. Today, one out of every three tires sold in Turkey carries the brand of Brisa.

Temsa Bus has exported to 66 countries amounting to 136 million dollars with its 3,800 employees. This is a big success. As Temsa Bus, with our 74 patents, we have launched numerous new products in 2016. For us, the most exciting one of these was the first 100% domestic production electric bus of Turkey that we have created in cooperation with Aselsan. It is also the first of its segment with a 8-minute to full charge feature. We have also received the "2016 New Product Innovation" award with our intelligent Avenue I BUS in the "Intelligent Mobility" organization held in London.

Temsa Construction Equipment has experienced a growth of 44% in its construction equipment rental fleet with its 850 employees and it is the leading brand in diesel lift trucks market. Temsa Motor Vehicles, on the other hand, has the largest pick-up vehicle park with the Mitsubishi L200 brand and its 1,050 employees in Turkey. We also have a market share of 30% with Fuso Canter brand we have been manufacturing in Adana for 25 years.

Yünsa is the largest fabric manufacturer in Europe and has a design office in Italy. Yünsa has exported to 50 countries, amounting to 60 million dollars with its 1,300 employees.

Turkey has an important role as a manufacturer in the cement industry. We have maintained our leadership in the industry with our cement companies Akçansa and Çimsa in 2016. Çimsa is one of the global leaders in white cement and special products and it has exported to 65 countries, amounting to 115 million dollars in 2016. In addition to our Afyon Cement factory that we have invested in 165 million dollars and will start operating in 2017, we will invest 55 million dollars in the modification of the furnace in our Çimsa Eskişehir factory to enable production of both gray and white clinker. These investments and the logistic distribution channels enabling the distribution of products to customers in shorter periods with its 7 terminals will help significant progress in Çimsa.

Akçansa is another source of pride for us. It exported more than half of its annual export of 60 million dollars to the US, enabled by the logistic advantages Çanakkale Harbor has brought, and became the most important supplier of the US. Akçansa has developed and used a special product with a100-year load bearing capacity without maintenance for the Yavuz Sultan Selim Bridge. Named 100+Beton, this product received Excellence in Cement award from American Cement Institute due to its high durability values against environmental factors.

On behalf of our employees contributing to this success, I would like to thank the Industry Group. As Sabancı of Turkey, we will continue manufacturing and creating value for Turkey's future with our employees.”