Sabancı Holding Invested TRY 1.8 Billion and Increased Its Sales By 22% During The First Half Of The Year 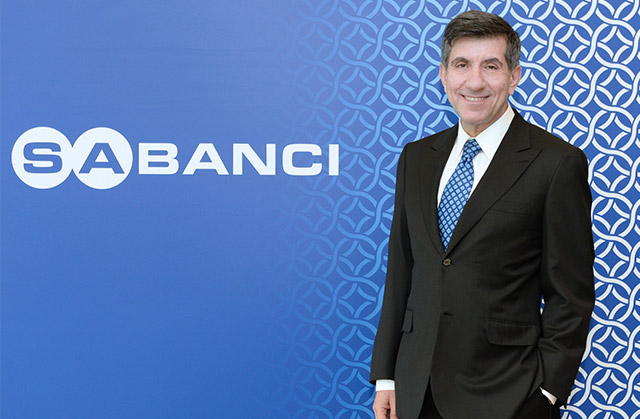 SABANCI HOLDING'S NET PROFIT FOR THE FIRST HALF OF 2016 IS TRY 1 BILLION 353 MILLION, 11% HIGHER THAN THE PRIOR YEAR PERIOD.

Sabancı Holding CEO Zafer Kurtul said, "As Sabancı Holding, we had a successful first half. We completed our generation investments in Enerjisa, and focused on increasing our service quality. Our aim is always to create value for our stakeholders, and to maintain our leadership with rapid growth in every field we are operating in."

"Retail is one of the most important lines of business for our Holding. We are determined in making our companies, Carrefoursa and Teknosa, the most admired brands of the industry, offering the best service to the customers."

As Sabancı Holding, we have increased our sales by 22% during the first half of 2016 compared to the prior year period, and we also invested TRY 1.8 billion during this period. The amount of investment since the beginning of 2015 is around TRY 5.5 billion.

Our country has successfully passed a critical point recently. Now, it is time to work and produce more for our country. We will continue contributing to the people of this country by working harder and producing more in every field we are operating as Turkey's Sabancı."

Making statements related to the banking operations of the Holding, Kurtul stated that Akbank has performed very successfully despite the uncertainty in the global markets. Kurtul stated that Akbank has increased its assets by 5.2% compared to the prior year period to TRY 266 billion during the period, and continued, "Akbank has increased its support to the economy through loans to total TRY 195 billion, including TRY 160 billion in cash loans. In the first half of 2016, Akbank had a net profit of TRY 2 billion 485 million. Akbank was also awarded as "Best Bank of Central and Eastern Europe" by Euromoney, a reputable finance journal, in June. Thus, for the first time, a Turkish bank has received such an award. The award is the reflection of the strength of Akbank, as well as the Turkish banking industry."

"WE COMPLETED THE GENERATION INVESTMENTS IN ENERJİSA, AND FOCUSED ON EFFICIENCY AND SERVICE QUALITY"

Indicating that Enerjisa has performed successfully during the first half of 2016, Kurtul said, "Enerjisa continued with its successful operating by taking timely measures in its three main lines of business including electricity generation, distribution, and retail. With the contribution of our renewable energy power plants, we increased the efficiency and performance of our production portfolio under challenging market conditions. We boosted our service quality with efficient operations in electricity distribution and retail. Today, Enerjisa provides energy to one of every four people in Turkey.

Kurtul also stated that the new incentive mechanism, regulated with the Cabinet Decree published in the Official Gazette on August 9, 2016 related to electric energy supply from local coal power plants, will provide a positive contribution for the development of power plants based on local fossil resources.

Kurtul continued, "We believe that the reduction in the price of natural gas, to be applied in 2016 as stated by the Ministry of Energy, will have positive consequences for the industry. We also think that the steps taken by the Ministry of Energy and the Energy Market Regulatory Authority for a more predictable market are very important, and bringing down the free consumer limit to zero in electricity will contribute to a more efficient and competitive market."

Regarding the operations of Sabancı Holding's Industrials Group, Kurtul said, "Our industrial businesses have performed very successfully during the first half of 2016, as in the past quarter. Particularly, Kordsa Global has increased its EBITDA (Earnings before Interest, Taxes, Depreciation and Amortization) to TRY 154 million, up 53% compared to the prior year period. The revenues were TRY 960 million, once again 16% higher compared to the prior year period. In the second half of this year, in cooperation with Sabancı University, we will be opening Kordsa Composite Excellence Center which will carry out R&D and production activities for composites, the materials of the future.

In addition to this, we have decided to make an investment for polyester yarn production in two of our facilities in order to strengthen our strong position in the market, as well as to meet the intensive demand for the tire cord fabric produced from our new generation polyester yarn developed by Kordsa’s R&D center. With these two investments totaling 29.5 million USD which we are aiming to complete within two years and to commission in 2018, our operations in Turkey will have additional 6 thousand metric tons of polyester yarn capacity, while our operations in Indonesia will have additional 6 thousand 500 metric tons of capacity.

Brisa maintained its strong position in the national and international markets during the first half of 2016. Today, one of every three tyres sold in Turkey is Brisa. Our Lassa brand succeeded in achieving a growth rate of 5% in the European market, where overall growth rate was just 0.6%. We are aiming to increase our tyre production capacity by 30% with our second factory, under construction in Aksaray province in Central Turkey with an investment of 300 million USD, to further strengthen our sector leadership in Turkey, and to further increase Turkey's export competitiveness in the international markets.

Our Temsa Bus business also had a very successful period. During the first six months of the year, we have broken a record by tripling our exports. By putting our Temsa Maraton vehicle on the market, we increased our market share in the travel segment of domestic bus market to 36% in the first half of 2016, while it was 30% during the prior year period. In the domestic midibus segment, we increased our market share from 27% to 35%.

Currently, Temsa buses are on the road in 66 countries and are even preferred in the Silicon Valley. As Temsa Bus, we launched several new products during the first half of 2016.

Kurtul also provided information on the operations of Sabancı Holding's cement companies, and continued, "Today, Turkey is the fourth biggest cement producer in the world, and the biggest in Europe. The increase in domestic demand for cement also continues in 2016. We maintained our leadership in the industry with our cement companies, Akçansa and Çimsa. Çimsa will further secure its position in the industry with the new factory of Afyon Çimento which we are planning to open by the end of this year with an investment of 165 million USD. This year, we will be celebrating Akçansa's 20th anniversary."

"WE ARE DETERMINED IN MAKING OUR CARREFOURSA AND TEKNOSA COMPANIES THE MOST ADMIRED BRANDS OF THE RETAIL SECTOR, OFFERING THE BEST SERVICE TO THE CUSTOMERS"

Sabancı Holding CEO Zafer Kurtul also touched upon the performance of the retail companies, and said, "Retail industry is one of the most important lines of business for our Holding. We continue providing service with our Carrefoursa and Teknosa brands, two important actors of this sector. In Turkey, particularly the food retail business grows by 15% every year. Having an important position in the market with the cooperation of Sabancı and Carrefour for more than 20 years, Carrefoursa brand is, and will continue to be, our most important business in the sector. Our aim is always to make Carrefoursa the best, most admired company of the sector, offering the best service to the customers.

"AVIVASA MAINTAINS ITS LEADERSHIP IN ASSETS UNDER MANAGEMENT IN PRIVATE PENSIONS, AND AKSİGORTA HAS GROWN BY 10% COMPARED TO THE PRIOR YEAR PERIOD"

Regarding the activities of Sabancı Holding in the insurance industry, Kurtul stated that Aksigorta has produced premiums of TRY 970 million during the first half of 2016 and has grown by 10% compared to the prior year period. Kurtul stated, "Our insurance companies had successful performances this year, too. Aksigorta has increased its net profit by 162% compared to the prior year period. We are the leader with Avivasa in private pensions with a market share of 19.2% in assets under management. As of today, we have more than 853 thousand participants. Our assets under management have exceeded TRY 10.7 billion.

As Sabancı Holding, we are a big family with more than 64 thousand employees. We have always been aware of our responsibility to our country and the environment. As we did to date, we, as Turkey's Sabancı, will continue to work, produce, and create value for our country and our stakeholders with our foreign partners and employees. Accordingly, we would like to extend our thanks to our shareholders, customers, and employees who contributed to the successful performance we had during the first half of 2016."