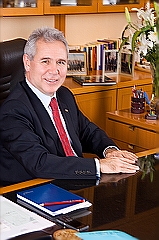 Sabancı Holding has recorded a net profit of TRY 1,258 Million for the 2009 year, an increase of 6% in comparison to the previous year.

According to Sabancı Holding's consolidated financial statements for the period ending 31 December 2009, sales were recorded as TRY 18,848 Million while operating profits increased by 45% over the previous year, reaching TRY 3,467 Million.

Sabancı Holding's CEO Ahmet Dorduncu stated in regard to these results: "Despite the challenging conditions in world markets during 2009, at Sabancı Group our financial results have shown an increase parallel to our sales targets. We overcame the uncertainties and difficulties in the economy thanks to our devoted and hardworking employees. Once again we have shown the quality of our human resources. I would like to thank all Sabancı Group employees who have contributed to these results, acting with the awareness that success is our responsibility.  We believe that our employees' hard work and our effective management will be positively reflected in our companies' targets with the improvement of economic indicators throughout 2010."