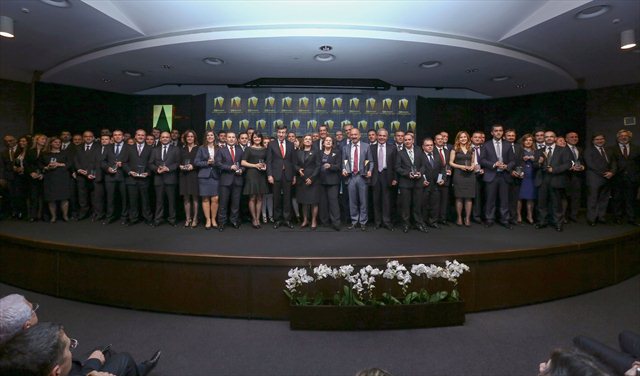 The Sabancı Holding Golden Collar Awards have been presented in 7 categories. As Aksigorta won the Value Adding category, the grand prize of the Sabancı Holding Golden Collar Awards; Brisa won the corporate subcategory and Akçansa won the individual subcategory of Market Orientation. The Investment in People award went to Avivasa, while the first-time awarded Equality in Business category went to Enerjisa. In categories contested by individuals or teams; Sasa got Efficiency, Çimsa got Innovation, Aksigorta got the individual subcategory of Synergy, while Akçansa got the corporate subcategory of the same award.

Sabancı Holding Chairperson Güler Sabancı stated at the opening of the ceremony:

“In this hard year of 2009, we gave out awards in every aspect that we strive to improve, that we believe at Sabancı, with the strength we receive from you. We created this award together. We have completed five years with devoted effort. I would like to repeat what I had said that day for the Golden Collar Awards. Excellence, the search for perfection and seeking always better is a journey, and is a beautiful one. If you achieve things and if you always seize the better, it is a very satisfying and pleasing journey. Thanks to your devoted participation into this journey, Sabancı Holding successfully proceeds on its way. This is our fifth year in Golden Collar Awards. As you know, it has been 10 years since Sakıp Sabancı passed away. I miss him, and I'm very thankful to him. This journey called excellence is something that he attached great importance, he called “always seeking better” and something we are maintaining.

You are working in many different categories. Efficiency is a topic that we never abandon. Synergy brings us values that make us a group ­ it contributes a lot, and makes a difference. We had an early start to work on innovation. Intelligent innovation means you can better seize the future. Investing in people is one of the most significant and indispensible values of our Group culture, something we are always sensitive about. Market orientation is one of our values that is also indispensible, but it is always good to remind ourselves of it. And creating value is something we do to create value for all stakeholders, all partners and shareholders, beyond everything else. We also added a new category. I delightfully and proudly would like to announce that category to be “Equality in Business”, an area that we pioneer in Turkish business world. I am also devoted to this field, so I am extremely interested in the results of this category. I have one more request from you this year. Entrepreneurship is one of the most prominent topic in the world. I would like you to look into and evaluate this field. We may perform a new effort in the coming years.”

Sabancı Holding CEO Zafer Kurtul also mentioned: “Golden Collar award categories and assessment processes are continuously renewed and improved every year through participants' and project team assignees' feedback. Many employees from our companies take part in project teams as well as in Field, Preliminary Assessment and Final Assessment Juries on a voluntary basis. This year, we had a total of 87 projects joining the contest.

Sabancı Golden Collar Awards are implemented through definition, methodologies and teams exclusive to Sabancı. This year, a total of 75 of our coworkers put in their valuable efforts to create award categories, define quality standards for assessment criteria and processes, and the final voting.”

Sabancı Holding Human Resources Group President Neriman Ülsever said in her speech: “Although five years is a very short duration for companies, it was a spectacular period of dynamic movement for Golden Collar. It is now better flourished, rejuvenated, grown and mature, and it proceeds on its way. Most important of all, it never lost its desire and excitement. We created the journey of Golden Collar together with you, and we go on this journey together with the same enthusiasm and excitement every year. Our goal is to exhibit the difference of Sabancı, becoming permanent and creating long-lasting values. Golden Collar Awards are reformed and improved in line with our objectives, priorities and success factors which orientate us into achievement, development and excellence.

Last year, we had promised to create a new category. The Equality in Business category... This category suits very well into the position of Sabancı, the first implementers in Turkey of many practices in terms of Gender Equality, women's economic freedom and participation into business life. We believe in equality. We believe in the richness in differences and pluralism. We launched this category with gender equality projects, but this is not a restriction in any way. We work for a world without restrictions due to language, religion, race, nationality and disabilities.