Sabancı Holding has become the official sponsor of the world's first youth summit, "One Young World", to be held in London on 8-10th February.  As part of its official sponsorship, Sabancı Holding will sponsor the participation of fifteen young people that have qualified from Turkey to attend the summit. Any young person who wishes to participate in the summit will apply via facebook.sabanci.com by uploading a one minute video that contains their message to the world. Upon evaluation of the results, fifteen selected youngsters will represent Turkey in London.

Prominent figures such as Kofi Annan and Mohammed Yunus will attend the summit, the opening speech of which will be presented by Sir Bob Geldof and by the Nobel Laureate, Desmond Tutu. The young people who will participate in "One Young World" will have been born in 1984 or later, have good teamwork skills, be interested in global issues, they will each have participated in voluntary activities, and should all have exhibited leadership potential.

During the summit, the selected youngsters will focus on topics proposed during a Global Consultation process spanning 70 countries, looking at issues that they think need to be dealt with, on a global platform, immediately. The issues are "developing a new sense of political leadership for a better future"; "global business and its contribution to the development of the economic future of society"; "interfaith dialogue"; "environmental issues"; and "the changing identity and power of the media".

Kofi Annan, Sir Bob Geldof, Desmond Tutu, Mohammed Yunus, and Oscar Morales are among the counselors to the "One Young World" Youth Summit, which will be held with the participation of approximately 1000 young people from throughout the world, each with proven levels of interest and leadership potential. Drafting, evaluating and voting on the summit's resolutions will be executed with the support of counselors.

Detailed information about the "One Young World" summit can be found at http://www.oneyoungworld.com/. 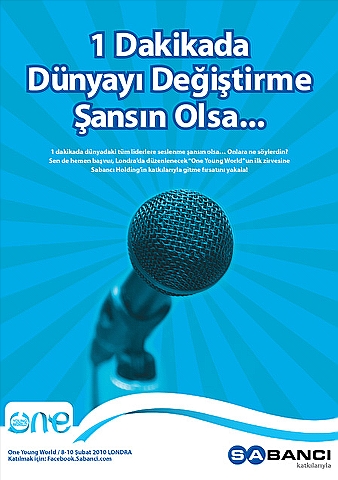