Sabancı Spring, designed by university students, comes to an end

Unlike many festivals organized in universities, Sabancı Holding allowed students to organize their festival the way they pleased through the social networking site Facebook. Approximately 200,000 youth participated in the festival, named Sabancı Spring. The Sabancı Spring closing ceremony took place yesterday, with the participation of thousands of students at Sabancı University. 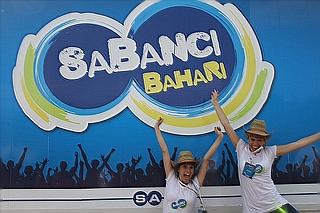 After a voting process that 3200 students participated in, these young people themselves determined the activities they wanted to have on their campus via facebook.sabanci.com. The festival's daytime activities were a range of fun-filled activities such as a Chocolate Workshop, Handicraft Workshop, Design Workshop, Pottery, a Music Workshop, Karaoke, Career Hunt, Pro Evolution Soccer (PES), Guitar Hero, and Nintendo Wii.

Sabancı Holding CEO, Ahmet Dorduncu stated in regard to Sabancı Spring that "As Sabancı Holding, we have adopted a philosophy of "creating together", and we have always believed in this philosophy. Sabancı Spring is a consequence of this philosophy.  Subsequently, we created an environment organized by the university students themselves and in which they can participate from the beginning to the end, organizing entertainment their own way. The great interest of the youth involved was the best evidence that we did a great job."