"Sabancı Volunteers" will Work for Women 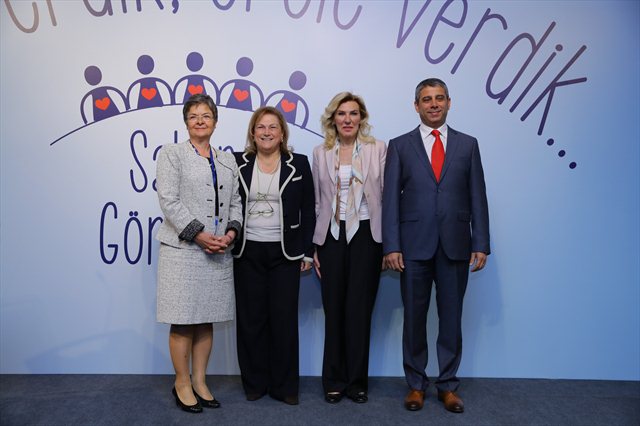 With a press meeting which is held on 13 May Wednesday in Sabancı Center, Sabancı Group has launched a new social responsibility program which includes all Sabancı Community employees and named as "Sabancı Volunteers". In the press meeting which is held by participation of Chairman of the Sabancı Group Executive Board Güler Sabancı, Sabancı Group Human Resources Group President Neriman Ulsever, General Manager of Sabancı Foundation and Sabancı Group Corporate Communications Director Suat Ozyaprak, the details regarding to "Sabancı Volunteers" program have been shared.

During the opening speech of the meeting, Chairman of the Sabancı Group Executive Board Güler Sabancı highlighted that "volunteering" is not a new notion for Sabancı Community and stated that they aimed to expand the influence sphere of charity works conducted by Sabancı Foundation for 41 years as including all Sabancı Community employees. Sabancı, added as follows;

"We are in service on several fields, such as industry, retailing, banking and energy sectors. In this side, there is financial dimension of our business. We take our responsibility towards our shareholders and contribute to the development of Turkey's and world economies. However, all by itself financial success is neither enough to satisfy us nor to define the human-oriented management manner of Sabancı Community. Today we are starting a new journey; For human again, we are starting up an organized volunteering movement which we will refer as "Sabancı volunteers". We are focusing on 3 subjects with Sabancı Volunteers; women, youth and handicapped. Sabancı employees make a difference everywhere they go with the "Sabancı Volunteers" project.

As stressing on they are a large family with their almost 60 thousand employees and their families, in her speech, Sabancı Group Human Resources Group President Neriman Ulsever highlighted that how much Sabancı Community dignify responsibility. Ulsever, "Responsibility is one of the essential notions which is reminded by Sabancı name. As a company which is responsible to its shareholders, business, sphere and society, now our target is to get more active results all together. By getting benefit from the experiences of Sabancı Universtiy and Sabancı Foundation, we herald a platform where we can share volunteering principles to all employees. Along with this, at the end of 2015 we would have 60 thousand employees who are trained gender training. And I hope that we would built a platform, a volunteer army with the participation of not only our employees but also all society. Within the first 3 years we focus on the subjects such as women consolidation, participation on business life and equipping with the equal opportunities in business life".

General Manager of Sabancı Foundation, Zerrin Koyunsagan said that as Sabancı Foundation they are so excited because they had an opportunity to transmit their all accumulation on corporate social responsibility into a new program which will include all Sabancı employees. Koyunsagan said that "As Sabancı Foundation, we have created a lot of values within 41 years. Since our foundation until today, we have created permanent work more than 120, gave scholarships to more than 40 thousand students and new projects, values. Over the past decade, we are struggling to integrate women, young and handicapped people into society as equal citizens. By considering that problems only can be solved by the ones who experienced, we have supported the nongovernmental organisations and donated them. Until now, we have reached to 700 thousand people and donated into 109 projects. I believe that we will produce projects with Sabancı Volunteers creating permanent effect and values".

Sabancı Group Corporate Communications Director Suat Özyaprak has said the largest corporate volunteering program has launched organized by a company working about women by sharing details on "Sabancı Volunteers" from participation process in the program to the training modules from reporting to project evaluation sharing.

Ozyaprak, added as follows: "Program is progressing over two main platform. First one is online training, the other one is volunteering projects. Online trainings shall include women subject and consist of 5 modules. We are planning to share information which will increase the gender sensitivity to all Sabancı employees. Our determined 5 modules are as follows; "Notions and definitions", "Education and Gender", "Business Life and Gender", "Violence Against Women" and lastly "Early Marriage"…

Second phase of Sabancı Volunteers Platform, trainings will be conducted in 40 cities and 7 center for volunteering projects. We will share our volunteering dynamics with our trainers to 500 volunteer team leaders in each city. Afterwards, we will want those team leaders to determine the needs of women in their city, workplace or region by setting up teams of 10 people. Thereby we would create a volunteer groups of 5000 people. Besides in the project pool to be created, projects will be gathered up and a synergy shall be built. At the end of tracking reports of 3 months, we will share our last point to public with our annual progression reports. We aim to be a volunteer army which creates permanent values for society in this three subjects including women, young and handicapped people in the end of 9 years.