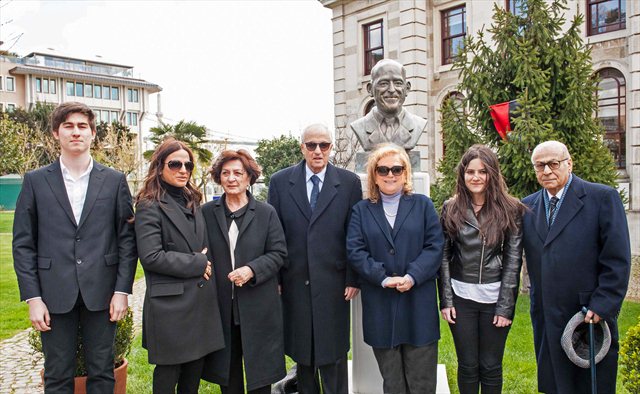 Deceased Sakıp Sabancı, the President of Sabancı Group Executive Board, is memorialized on his eleventh decease anniversary with a ceremony on his graveyard.

To the ceremony in Zincirlikuyu Graveyard, Sakıp Sabancı's daughters Sevil Sabancı and Dilek Sabancı, his granddaughter Melisa Tapan, Sabancı Group Chairman of the Executive Board Güler Sabancı, Sabancı Group Deputy Chairman of Executive Board Erol Sabancı, Akbank Executive Board President Suzan Sabancı Dincer and Sabancı Community senior managers and friends has participated. Students of Dilek Sabancı Vocational And Technical High School, Sakıp Sabancı Anatolian High School and Turkan Sabancı School For The Visually Impaired and the names from business world such as Mehmet Nezih Erdem, Erdoğan Demirören was among the participants in ceremony.

In his speech, Sabancı Group General Secretary Nedim Bozfakıoğu stated that"We feel that he is with us supporting us with his pozitive energy, smile and ambition to work despite the passed 11 years. Mr. Sakıp believed the strength of innovation, development and new ideas along his life. He always advised us: 'Be friend, be mates, have a friend, have a mate. People become happy until they love and be loved'. He was happy as much as he was loved and he was loved as much as he was happy.  Despite the distance of time over his decease, we are happy to see that the new generation, especially the young people know Mr.Sakıp and respect him. This shows that even if Sakıp Sabancı does not exist among us, he still influenced the society and still influences.

As I said in the Memorial Ceremony; 'Everyone likes their country but the essential one is that the country likes the person' is suitable for Mr.Sakıp. Mr.Sakıp leaded several significant works from art to education, reached to needers, supported. Each one of the employees in Sabancı Community is walking through this path he opened with the same awareness and sensitiveness, proudly and successfully.

'Luckily I ran, Luckily I worked. I wish I could work more, I wish I could run more.  For a more beautiful Turkey, for a more successful Turkey' said Sakıp Aga. And now we say: Luckily we knew him. Luckily we worked with him. We wish we could work more, we wish we could be together much more years'. However we know that his memory is always with us, his words are always in our minds.

Our Sakıp Aga with his diligence and unique vision become Sabancı Community's source of proud and inspired us to do better, if he would be among us today, we are sure he would proud of rapidly increasing employees and their successes."

The bust of decedent Sakıp Sabancı was opened in the garden of Kabatas Male High School Educational Foundation Sabancı Cultural Site. As it does every year, on April 10, the commemoration ceremony held at the graveyard. Güler Sabancı, Sevil Sabancı and Melisa Tapan joined the bust opening that has been conducted after the ceremony. As well as the senior management of Sabancı Group, Kabataş Male High School Educational Foundation board members were also there at the ceremony.

The bust that has been made by Mimar Sinan Fine Arts Faculty Sculpture Department Vice President Prof. Neslihan Pala, placed in the garden of Sabancı Cultural Site that located in the Feriye Palaces complex. Decedent Sakıp Sabancı's memories will live for generations under the favour of the bust that has been made for his contributions to the construction of Sabancı Cultural Site while he was the Chairman of the Board of Trustees of Sabancı Foundation.

Speaking at the opening ceremony, Sabancı Foundation Board of Trustees Chairman Güler Sabancı said "Today is a very significant and important day for us. We memorialize Mr. Sakıp Sabancı at the 11th year of his leave. Mr. Sakıp used to love this place so much. Contributing to Kabataş Male High School Educational Foundation with the income derived from Feriye Palaces Complex, was a model that Mr. Sakıp Sabancı actualised with excitement. Today we see that, models like this are very important in the world now. It is a pride for us to see that, a public school has a better quality in education with the assistance of a foundation. I would like to thank you on behalf of the Sabancı Family and Sabancı Foundation, for remembering and commemorating Mr. Sabancı and offering to place the bust of Mr. Sabancı here. It also made us very happy that Mr. Sabancı to be remembered in a place that he loved so much. These kind of works usually represent the seriousness, but this bust explains Mr. Sabancı very well, who loves to laugh in his life time."

After the speeches, the opening of the bust was done by Güler Sabancı, Sevil Sabancı and Melisa Tapan.

“Feriye Outpost” is located in the “Feriye Palaces” complex that has been build at the second half of 19th century, and with the contribution of Sabancı Foundation, it has been built in accordance with its historical structure, and located in the same area, also, “Zaptiah Wards” has been renovated. In 1995, it has commenced to give service with the name Kabataş Male High School Educational Foundation Sabancı Cultural Site, to be used by educational, instructional and cultural purposes. It is situated on a 12.311 m2 area and has a total of 6.086 m2 indoor space.