Mr. Suat Ozyaprak has been appointed as the Sabancı Holding Chief Communication Officer, effective from 01 January 2009.

Having started his career as the Media Relations Advisor at the Sabancı Holding Corporate Communication Department in August 2005, Suat Ozyaprak was in office as a Communication Manager since September 2006. 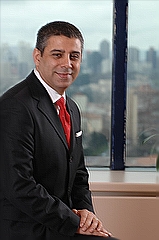 A graduate of the Journalism and Public Relations Department of the Istanbul University College of Press and Publication, Suat Ozyaprak started his journalism career at the Anadolu Agency in the year 1987.  Ozyaprak, who had worked as an economics reporter until the year 1995, held the office of Communications Advisor at the Foreign Economic Relations Board (DEIK) during the years 1995-1998.  Following DEIK, he worked as an economics journalist and presenter at CNN Turk, Kanal-E/CNBC-E and Haberturk, and held the office of Assistant General Manager at MPR Public Relations Company during 2002-2005.

In addition to his service as a television presenter and a radio commentator, Suat Ozyaprak authored a great number of research papers and articles during his more than 20-year career.