The Austrian Press praises Guler Sabancı, who has been Honored with Austria’s Highest Decoration 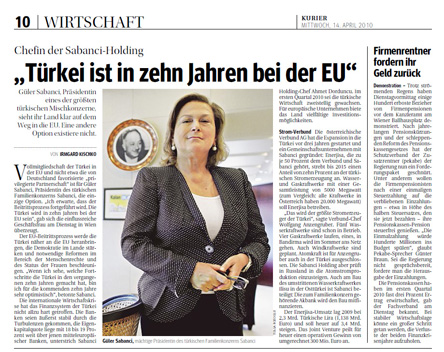 Austrian press has displayed a close interest in the occasion of Sabancı Holding Chairperson Guler Sabancı being honored with the "Silbernes Ehrenkreuz der Republik Osterreich", the highest decoration of the Republic of Austria. Various national newspapers and magazines across Austria have written a great deal on the subject.

WirtschaftHeute presented its readers with the heading "Great Decoration for Turkish Female Boss". In the subsequent article it was noted that Sabancı Holding's Chairman of the Board and partner in Verbund, Guler Sabancı, was presented with the "Silbernes Ehrenkreuz der Republik Osterreich" decoration by Reinhold Mitterlehner, the Austrian Minister of Economy, Family and Youth.

Wirtscahftsblatt, another important Austrian paper, mentioned the event as "Austria thankful to Guler Sabancı", stating that Turkey is an attractive country and one with high rates of growth as well. The article mentioned the investment environment in Turkey, as well as featuring the comment of Josef Poschl, Turkish specialist at the WIIW economic research organization, that "the probability of success seen by organizations that partnership with groups such as Sabancı is greatly elevated". In the article it also mentioned Sabancı Holding's areas of activity and its investments in energy sector, stating that "Enerjisa is on the way to becoming the market leader in Turkey."

Format magazine included much information about the ceremony and about Guler Sabancı's award, highlighting both Turkey's targets and success in the energy sector and stating that Guler Sabancı was behind the partnership between Sabancı and Verbund. The magazine emphasized that Verbund gained an extremely effective partner given Guler Sabancı's vision during the privatization process in Turkey, and it added that Guler Sabancı's effect extends beyond Sabancı Holding. In the news sections it was stated that Sabancı is among the most powerful women in the world.

Kurier, one of the largest circulation newspapers in Austria, introduced Sabancı as the most powerful women of Turkey and an art supporter under the heading "East and West come together in Albertina". The article also mentioned Abaci's views on about Turkey's EU membership. Kruier highlighted Sabancı's declaration saying that the accession period has drawn Turkey and Europe closer, strengthened the country's economy, and sped up the necessary reforms processes in fields such as human rights and in the status of women. In the news, it also mentioned Sabancı's statement "When considering the progress that has been made in Turkey over the last 10 years, I am optimistic about the next 10 years".

News magazine announced the decoration to its readers under the heading "Turkey's most powerful women", while Neues Volksblatt magazine mentioned it in its economic pages. In news under the heading "Big Award", it was stated that Sabancı's contribution to the economy and to the cooperation between the Sakip Sabancı Museum and the Wiener Museum fur Angewandte Kunst (MAK) had both been determinants in the decision to honor her with Austria's highest decoration.