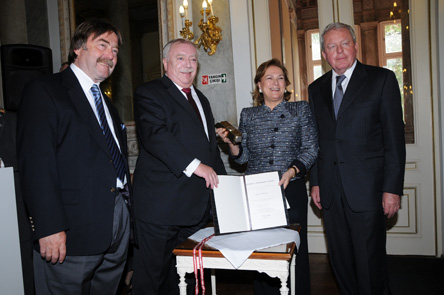 Sabancı Holding's Chairman, Ms Güler Sabancı, was presented with the Schumpeter Award during a ceremony held at the Austrian General Consulate. This prestigious award, commemorating the memory of former Austrian economist Joseph A. Schumpeter, has been granted annually since 1991.

In his speech, Austria's former Federal Chancellor and current President of The Schumpeter Society, Dr.Franz Vranitzky, talked about the award. Mr. Vranitzky said "It's a privilege for us to present this award to a person as valuable as Güler Sabancı".

Prof Dieter Stiefel, an academic and Member of the University of Vienna, said in his speech that "the Schumpeter Award is only presented for innovations. This term, even though it was so clear to Joseph A. Schumpeter, has come to have an ambiguous meaning over recent years. Innovation has are three core aspects: new production methods and management styles; the deliver to market of either new products or products with unique qualities; and entries into new markets. 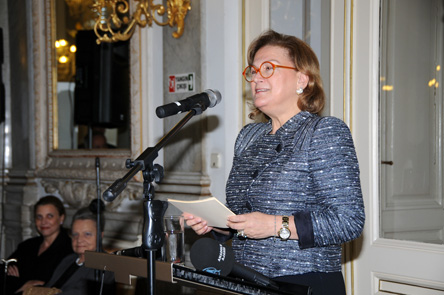 Regarding the first point, Güler Sabancı graduated with business administration qualification, she manages more than 50,000 employees and she heads a company with an annual turnover of more than EUR 10 billion. The Sabancı Group is now focused on its five main business areas. While this situation has evolved over time, the company remains firmly based on its principles of diversity. Business administration has its fashions too. Following the 1980's, it was popular to focus on only one industry. However, Sabancı stuck to its risk diversification strategy and, as a result, has become very successful. The company's management principles, according to Güler Sabancı, are to manage diversity, to create alternatives and to be effective in all of their businesses. To achieve all of this requires creativity".

Discussing how the delivery of new products to the market is not just a matter of innovation but rather how it requires a process of unending enhancement, Prof Stiefel said:

"This then underlines the importance of research and development. Sabancı Holding has very successfully met all of its requirements in all its businesses and the company remains committed to extending into high-potential industries. In its provision of services to the energy industry, EnerjiSA formed a partnership with Austria's Verbund and it now aims to become the leading company in the industry. As it has become a developed country, Turkey does now have to focus on its own markets. The stunning growth of Sabancı Holding over the recent years has been based on product innovation, quality and productivity. Together, these mean that the company's growth is sustainable."

Prof. Stiefel went on to say that "Sabancı is not only a regional but a global player" and that ‘global' applies not only to industrialized Western countries but also to Asia and the Middle East.

"Güler Sabancı feels that she is a European citizen and she believes that Turkey's membership of the EU is a beneficial necessity not only for Turkey but for the whole of Europe" said Prof Stiefel.

"The title ‘Schumpeter' does not only indicate entrepreneurial work, but also social responsibility. Güler Sabancı perfectly fits this image of an entrepreneur. She has combined her success in the business world with studies of the sciences, of society and of the arts. The Sabancı University, which she had a leading role in founding, is one of the most liberal universities in Turkey. Furthermore, the Sabancı Foundation supports woman, girls and the disabled, undertaking many projects to support these people. So far, the Sabancı Foundation has brought 2,000 young teachers from six different Anatolian cities to the University of Sabancı for training. Further, Güler Sabancı is a dedicated patron of the arts, contributing to the international world of art through the Sakıp Sabancı Museum and other activities such as theatre festivals. It is an honor for us to present the Schumpeter Award to Güler Sabancı".

After receiving the award from the Mayor of Vienna Dr. Michael Häupl, the Chairman of Sabancı Holding Güler Sabancı said "I am proud to have been deemed worthy to receive this prestigious Schumpeter Award. Schumpeter's creative theory is the essence of sustainable growth and innovation, and all of its related strategies shape economics through the vital methods described in the theory. Innovation, growth and entrepreneurship always prove to be the key concepts that we can depend on to create value and prosperity. Being aware of this and of the responsibilities thus implied are both crucial for today's globalized business world".

Ms Sabancı mentioned that she had worked in all levels of the Sabancı Group, having begun her career there 33 years ago.

"My team and I were trusted and presented with many opportunities. By working together, we established many successful partnerships, new business opportunities and global brands, and we succeeded in raising "Turkey's Sabancı" to the prominent position it now holds today. To ensure that our growth is sustainable, we have consistently supported business excellence, innovative ideas and the necessity of creating the appropriate atmosphere within the organization. Innovative leadership is essential for the creation of the right atmosphere for business life. Therefore, it is on behalf of all of the innovative leaders in my team that I accept this award."

"The free market economy is a prerequisite for improving entrepreneurship" Ms Sabancı said, "and the political and economic environment in Turkey has delivered many opportunities for improvement to both my family and to my company". She concluded her speech with the words:

"I am proud that the Schumpeter Society has appreciated our work. This award will increase our belief in the reliability of our innovative entrepreneurship. The single most significant thing that I have learned during my career is that, if I have had success in innovation and entrepreneurship, then this is not only my success, but it is my family's success, my team's and a success for all of our valuable partnerships' with companies such as Verbund.

Thanks to my team's initiatives and the support of our executive board, we founded EnerjiSA back in 1994. Our partnership with Austria's Verbund is a glowing example of the growth of our brands and of the success of our Turkish partners. With our partners, as a team, we will continue to create more robust value than we ever could individually. It is for this reason that I accept this award on behalf of all of my colleagues on the executive team and throughout Sabancı Holding."

Introduced by Vienna's Schumpeter Society for politics, economics and business life, the Schumpeter Award is presented every year to a person who has created innovation within his or her own domain and who has completed new and progressive projects.

Since 1991, a number of important figures have been recipients of the Schumpeter Award, including the former Prime Minister of Germany Helmut Kohl, the famous media businessman Mr. Ted Turner, the former Enlargement Commissioner for the EU Mr. Günter Verheugen and the Chairman of Nokia Mr. Jorma Ollila.

- OTHER AWARDS RECEIVED BY GÜLER SABANCI-

Following her decoration bestowed by the nation of Italy in 2002, Güler Sabancı was presented with the "Order of II. Leopold Commander" in 2007 by the President of the Belgian Senate, Armand de Decker, in response to her major contributions to the economic relationship between Turkey and Belgium. In 2009, in acknowledgement of her contributions to the relationship between Turkey and Spain, Güler Sabancı was presented with Spain's highest order of merit, the "Order of Encomienda De Numero" by Spain's Second Deputy Prime Minister Mr. Elena Salgado in a ceremony held on behalf of King I. Juan Carlos. Güler Sabancı was then awarded the "Silbernes Ehrenkreuz der Repuberlik Östreich", the highest Austrian order of state, by the Austrian Minister of the Economy, Family and Youth Mr. Reinhold Mitterlehner in April 2010, followed by the French "Legion d'Honneur" in June of that year.

Ms Güler Sabancı is the recipient of the Raymond Georis Innovative Philanthropy Award.