The Chairman Of The Board Of Trustees Of The Sabanci Foundation, Ms. Guler Sabanci Received “David Rockefeller Award” For Her Philanthropic Achievements 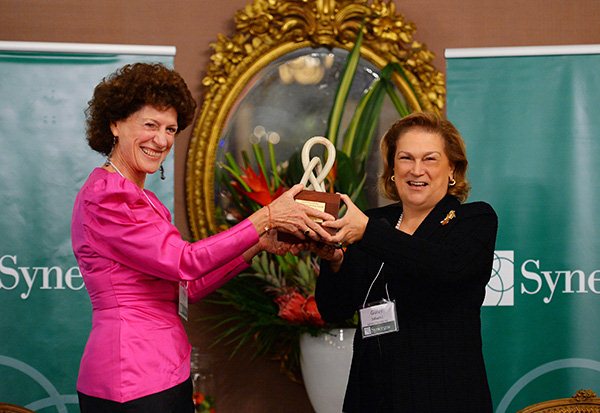 The Chairman of the Board of Trustees of the Sabancı Foundation, Ms. Guler Sabanci was recognized and honored with the “David Rockefeller Bridging Leadership Award” which is presented to exceptional leaders who work for social development. Named after the leading businessman and philanthropist David Rockefeller, this award was presented to Ms. Guler Sabanci for her leadership and impactful contributions to philanthropy. The award ceremony was held on 8 October 2013 in Geneva, Switzerland.

At the award ceremony which brought together leaders from business, public sector and civil society, the daughter of David Rockefeller, Ms. Peggy Dulany presented the award to Ms. Guler Sabanci and added: “Guler Sabanci is a model for all leaders in business and philanthropy, not only in Turkey but around the world. She is deeply engaged in what the Sabanci Foundation and Sabanci University do, and highly articulate about the rationale for choosing each strategy. And so much of their success is about reaching out and collaborating with other parts of Turkish society, as well as international partners. That is what this award is about. I am happy to present her this award.”

The achievements of the Sabanci Foundation were highlighted through an opening discussion between Ms. Sabanci and Ms. Dulany. In her acceptance speech, the Chairman of the Board of Trustees of Sabanci Foundation, Ms. Guler Sabanci said: “I am accepting this award on behalf of Sabanci family, Sabanci Foundation and the ones who have contributed to our foundation from the past to the present. As a member of a family with 50-years of philanthropy, it is an honor for me to receive this award from the Rockefeller Family whose philanthropy goes back to 150-years ago.”

Ms. Guler Sabanci expressed her gratitude for being recognized and added: “We can categorize the philanthropic activities of Sabanci family in three periods. In the first period, about 50 years ago, the family members used to help people in need on an individual basis; in the second period, about 40 years ago, the foundation was established with the generous donation of my grandmother and our philanthropic activities became institutionalized. In the third period, since 2006, we have been trying to understand the needs of the society and come up with solutions. In this period, we carried out the necessary analyses and introduced the strategic philanthropy model into our lives. Since then, we had the opportunity to champion women’s and girls’ right and equal participation. But, we still have a long way to go. We have to support and improve the role of women in society not only in Turkey but around the world. Besides women and girls, we determined our focus areas as youth and persons with disabilities.”

Underlining the necessity for improving the human rights of girls, Ms. Guler Sabanci emphasized the importance of the “International Day of the Girl Child on October 11” declared by the United Nations.

Ms. Guler Sabanci continued her speech: “No one can solve the existing social problems alone, neither can we. Therefore, we need to improve our culture of cooperation and partnership. This is our approach. Observing that problems are being solved and NGOs are actively taking part in society proves that we are on the right track.” Ms. Guler Sabanci also emphasized the importance of individual efforts in addition to cooperation: “When we started our Changemakers Program, we wanted to spotlight individuals working for the benefit of the society. We did that, because we need to see good things happening. We need to encourage others and be encouraged at the same time, to do something good for the society.”

The “David Rockefeller Bridging Leadership Award” is presented by the Synergos Institute founded and chaired by the daughter of David Rockefeller, Dr. Peggy Dulany. Past recipients of this award include global leaders such as the former President of the United States Bill Clinton, the former President of South Africa Nelson Mandela, former Secretary-General of the United Nations Kofi Annan, Bill and Melinda Gates, Queen Rania of Jordan, Aga Khan, Michael Bloomberg, Jennifer and Peter Buffet.

About the Synergos Institute

The Synergos Institute helps solve complex problems of poverty and inequality by promoting and supporting collaborations among business, government, civil society, and marginalized communities in 30 countries. The Global Philanthropists Circle, which is a group of more than 250 philanthropic families including Guler Sabanci located in 20 countries, enables its members to convene several times in a year and share their views and experiences regarding solutions of global problems such as poverty and famine.