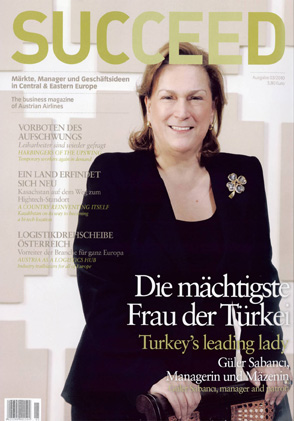 The interview with Güler Sabancı, Chairman and Managing Director of Sabancı Holding, is the cover page news of Succeed magazine, publishing for the Austrian Airways. With the headline of "Turkey's leading lady", the magazine introduced Güler Sabancı as the "Manager, patron of the arts, pioeer, Head of Sabancı Holding, one of the most influential women in the economics world. And she sits at the helm of one of the most successful family companies in Europe." The interview covered Güler Sabancı's evaluations about Turkish business world, economy and Sabancı Holding.

Towards the question of "Companies like Sabancı are huge family-run enterprises, which have gained worldwide relevance. What are the strengths of Turkish companies - and where do they have potential to improve?" Güler Sabancı answered as; "The business environment in Turkey has great potential, which makes it one of the global players. Firstly, half of the Turkish population is young and has the potential to improve the economy. Considering that GDP is expected to grow five to six percent in the coming years, this young population is one of the most important strenghts of the Turkish market. On the other hand, highly qualified Turkish professionals already hold crucial positions in multinational companies as they have great leadership, education and entrepreneurial abilities. These managerial skills allow them to adapt under both Eastern and Western conditions. While many Turkish talents work in high managerial positions all around the world, Turkish entrepreneurs have strong bonds with Western companies. In terms of weaknesses, Turkey needs to invest in R&D and innovation. But from another perspective, this can be considered a potential as well."

About the question of "Which goals are being pursued in 2010 and 2011? What impact does the current economic cycle have on your company?" Sabancı said, "In 2010, our companies will be back on track for profitable growth. We expect the uncertainty in the economy in 2010 to be comparatively lower than the previous year. In 2010, our consolidated net revenue is planned to grow by six percent while our consolidated operational income is expected to reach 4.0 billion Turkish Lira. Our aim is for exports to amount to 1.1 billion and investments to 1.6 billion US dollars. In 2010, we expect that the number of our employees will be around 58,000."

Towards the question of "What are attractive future markets for Sabancı?" Güler Sabancı answered as; "The carbon economy and environmental sustainability will also be necessary in the future. We are evaluating sustainable new business opportunities, such as renewable energy resources and waste management implementations that will create value for all of our stakeholders and the environment. We are investigating strategic opportunities in Turkey and regional markets. In addition to electricity production, we are seeking other opportunities within the wind supply chain. In line with the EU alignment process, proper disposal of solid waste will require significant investments. We are seeking opportunities within the solid waste management area to ensure the sustainability of the environment. We are also giving high priority to institutional environmental issues. The Group and Group companies work together for SA Institutional Environmental Platform, SA Environment Group and Sa Environmental Portal in order to create best solutions." 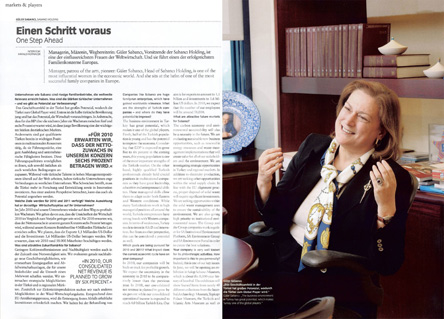 To the question of "After a negative GDP in the last year, Turkey's GDP is estimated to grow by four to five percent. Experts from Goldman-Sachs recently said that by 2050 Turkey would be able to overtake Germany as an economic power. Do you share this opinion?" Sabancı's answer was: "With the improvements in macroeconomic conditions and the institutional reforms implemented in the banking system, public finances and in other major areas of economic activity, the Turkish economy has become far stronger today than it has been for years and growth has become more sustainable. Certainly, for a modern economy to remain strong and competitive in a rapidly changing world, the need for structural reforms never ends. Sustaining macroeconomy stability is also a prerequisite for balanced and rapid economic growth. I strongly believe reforms and macroeconomic stability will continue and the Turkish economy will grow more quickly than the global economy in the coming decades eventually overtaking most of today's big European economics."

"OUR ECONOMY IS HIGHLY SOPHISTICATED"

Sabancı stated the main strengths of the Turkish economy as: "Our economy is highly sophisticated. Its growth is driven mainly by steady productivity gains in the high performing private sectors like autos, durables, machinery, chemicals and iron and steel. Looking forward, the favourable demographic dyanmics will add to Turkey's strong growth and rapid catching-up. Growth in Turkey's large population will continue in the next few decades though at a decelerated rate. Turkey has a very young population and a fast growing workforce. Growth in the workforce will boost savings, investments and growth considerably. Turkey's future economic strength goes beyond its demographic profile. Its high openness, diverse human capital base, accumulation of know-how and technology underpin its long-term growth potential. I believe the openness of the Turkish economy will increase further in the coming decades with expansion in trade volume and foreign direct investment (FDI) inflows, which will add more efficiency, technology and management skills. Turkey has a great potential to attract more FDI, given its large domestic market and unique geographical location with Europe, Asia and Africa in easy reach. Convergence with the EU and continued macroeconomic and political stability will be very crucial in that respect. The EU accession process will not only help to atract more FDI, but also accelerate economic reforms and democratisation, which are the essential components of rapid and sustainable growth and political stability. I believe the EU accession process will continue to be the major objective of the governments."

About the challenges for Turkey, Sabancı said, "To sustain faster growth, Turkey must invest more in human resource development. Today, there is a group of very well educated and trained people, a number of first-class high schools and universities; Turkey's human capital indicators already stand above the BRICs and the developing world average. However, in order to narrow the gap between the EU averages, Turkey must invest mote in this area to increase particularly education quality at all levels and schooling rates at the seconday and university levels. More investment in human capital to fully utilise the human resource potential and improve skills profiles will bring faster and sustained growth."

Sabancı answered the question of "Turkey is growing more and more popular as business partner for Western European companies. Nevertheless, some Western companies are afraid of entering the Turkish market. What is the reason for this?" as: "I would argue strongly that Western companies who are afraid of entering the Turkish market are missing out on the opportunities of being in one of the fast growing economies in the world in the next few decades. Turkey works hard to attract more foreign companies to invest in it. To do this, in the coming years you will see more work done to improve education and training, particularly in foreign language skills and technical education in Turkey. Reforms in the energy sector, including pricing, deregulation and privatisation will continue. More progress will be made towards increasing the flexibility of the labour market, improving the transporation and information technologies infrastructure, further improving the public administrtion, and further strengthening the implementation of legislation on intellectual property rights in accordance with international standards. The measures to reduce informality will also be strengthened."

In the article referring to the social responsibility of Sabancı Holding, Sabancı was asked the personal importance of the subject. Sabancı answered as, "Indeed, this is one of our key issues. In June, we have opened an exhibition in Sakıp Sabancı Museum, which is about the 8,000-year history of Istanbul. The exhibition shows loaned items from nearly 40 different collections from the Istanbul Archaeology Mueseum, Topkapı Palace Museum, The Turkish and Islamic Arts Museum as well as other state museums of Turkey. The art works, which are normally exhibited in prominent museums all over Europe, like the British Museum in London, the Hermitage Museum in St. Petersburg, the Bargello Museum in Florence, the Louvre in Paris, and the Vatican Museums, are appearing in this very comprehensive exhibition, and the city's evolution from Byzantine days to nowadays and its effect on world histroy and the interactions with contemporary cities are presented to the public. During the exhibition, the history of Istanbul - which is not common knowledge, even today - will be shared with the public via education programmes and conferences."