The life of Sakip Sabancı was commemorated, on the 6th Anniversary of his death, at his final resting place 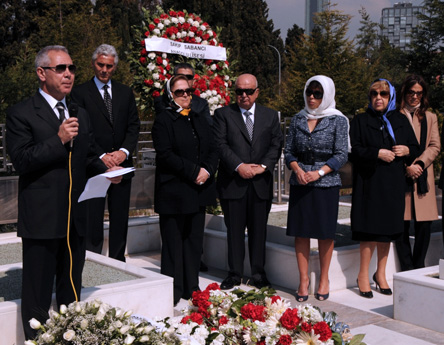 The late Sakip Sabancı, Sabancı Holding's Chairman, was commemorated during a ceremony held at his final resting place on the sixth anniversary of his death.

In his speech at the ceremony, Sabancı Holding CEO Ahmet Dorduncu said "Mr. Sakip Sabancı devoted his life to the development of the Turkish people's cultural, artistic and social lives, as well as leading the Sabancı Group for 38 years, making it an important building stone of the Turkish economy. Many things have been told and written about him since he had passed away six years ago. He has been remembered both as a businessman and due to his social works. But it is again his words that describe him the best: "I would get angry if someone called me "rich"; I'm happy with my social identity and with being generous-hearted". It was a huge happiness for Mr. Sakip Sabancı to share what he had. That is why he is still remembered by his love for his country and its people, his humbleness, his far-sightedness, his energy and his successes in business world, these together have won him an irreplaceable place in the Turkish people's heart.

Dorduncu continued "In the six years that have passed without him; we have done our best to carry his vision into the future as the Sabancı Group. Our companies are progressing in line with our economic targets. We are realizing projects that will make permanent differences in people's lives through our foundations, universities, museums and with our work in various areas of Turkey's social and cultural life. All these efforts are backed with the human resources to which Mr. Sakip Sabancı paid so much attention. Sabancı Group employees will continue to carry the values and vision he left to us on into the future. Mr. Sakip Sabancı concluded his book, "Basari Simdi Aslanin Agzinda" (Success is now in the Mouth of the Lion), with these words: "You have to be successful, not only for yourself, but also for your friends and for your country". As Sabancı Group, we have taken on this responsibility".