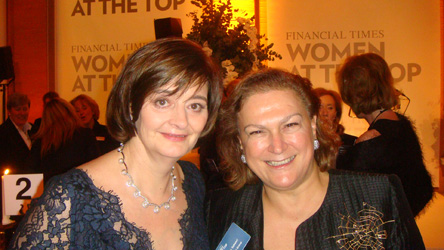 Financial Times, one of the most efficient business publications in the world, used the following statements in the introductory letter for Guler Sabancı: "Guler Sabancı is not only the chairman of one of Turkey's largest corporations but also an important force in the political, social and cultural life of the country. The company she runs is a giant

encompassing many industries including banking and insurance, cement, retail, tyres, textile, energy and chemicals. As well as business, she is equally fluent in talking about educational progress in Turkey, clean energy, wine growing, Picasso, Mozart and Ottoman calligraphy. 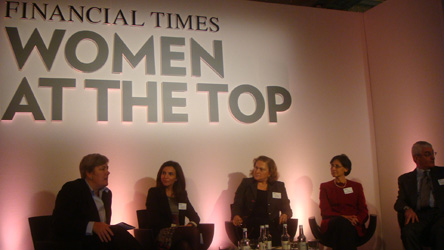 The jury, made up of leading representatives from the international business world, chose the top 50 women in the list prepared by the Financial Times.

The jury consisted of the following people;

This year Indra Nooyi (Pepsi Co CEO) ranked as the first on the list of the Financial Times.  Andrea Jung (Avon CEO) ranked as the second. After Sabancı Holding Chairman of the Board and Executive Director Guler Sabancı, the owner of the third rank on the

-THE CONFERENCE OF WOMEN AT THE TOP-

Sabancı Holding Chairman Guler Sabancı had delivered a speech in the conference "Women at the Top" before the list was announced. In her speech Guler Sabancı mentioned the following: "The development trends of today's business world enable today's women to escape from traditionalism. Similarly, we can say that after the financial crisis the old methods of doing business are no longer in use. This crisis showed that female executives in the world prevented their enterprises from sustaining deep wounds." Arguing that the world fell into the crisis since it did not focus enough on the real issues creating value, Guler Sabancı also stated that the crisis revealed the need for simplifying the business processes in the business world.

Guler Sabancı noted that women's abilities of risk avoidance and empathising help them in the business world. "Especially before the financial crisis began, many good companies had started to focus on cooperation and networking instead of patriarchial hierarchy" Sabancı noted and continued: "In such areas women have an inherent advantage. Such abilities as cooperation, collaboration, empathy and risk avoidance, considered as belonging mostly to women, have been beneficial for the post crisis period. Risk avoidance does not mean being closed to development and progress. Women do not hurry. They think, evaluate, empathise and then take action. They are less aggresive but more cooperative. They are less competitive but give more importance to partnership. They are less power-oriented yet more inclined to team work."

Sabancı continued as follows: "According to the book (Women in the Board of Directors), women are better and more idealistic in thinking about growth. Until now, these abilities had not been considered desireable. However, academic studies and personal comments from the business environment suggest that male executives need to be more adaptable and accessible. Namely, they need to be like women. In spite of this fact, women are not represented enough in the top management of their companies. In the United States, only 2% and in England 5% of the bosses are female. These rates should be increased not only as a requirement of equality, but also for success. Because original ideas arise in environments where differences exist together. Differences feed innovation. In this respect, diversity is of great importance. However diversity should not be perceived as the distinction between men and women or local and foreign. Every individual is different and diversity begins with management of the individual. Management that values innovative diversity focuses on individuals. I learnt this by watching my grandmother when I was a child."

- THE RATE OF FEMALE EXECUTIVES ROSE TO 26% IN SABANCI GROUP-

Touching upon the rate of female executives in Sabancı Group, Guler Sabancı, stated that throughout her 32 years in business, she worked at every level of the Group and gave due importance to every duty. Stating that Sabancı Holding has always been a pioneer in gender equality, something that has always encouraged her to improve herself, Guler Sabancı continued her speech as follows: "Even though I have worked in different positions, my gender has never been an important issue. It was exactly the same when I was appointed to the chairman of the board. I am the first female member of TUSIAD and its current chairman is also a woman. By the way, I would like to point out that I am the only female member of ERT (European Round Table of Industrialists) of which I am very proud. From 2006 until 2010 we increased the proportion of female executives in Sabancı Group from 23% to 26%."

Having stated that women's rights are a part of Sabancı Holding's corporate social responsibility platform, Guler Sabancı said: "(The Sabancı Foundation) has a ‘Joint Program to Promote and Protect Human Rights of Women and Girls,' that involves all of the United Nations agencies, the Ministry of Internal Affairs, the Sabancı Foundation and the Sabancı University."

-REGARDING THE TURKISH ECONOMY-

During the conference, Guler Sabancı also talked about the Turkish economy, and forecasted an annual growth of 7-7.5% in 2010, while adding that Turkey showed great reflexes during the crisis. According to Sabancı: "In the first six months of the global crisis, along with all my management team, I visited each of our companies at least three times. I talked to employees from every level, and tried my best to alleviate their fears."