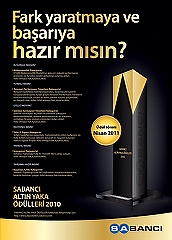 The process for the second Sabancı Golden Collar Awards has begun, seeking to encourage and reward the successes of the Sabancı Group's companies and their employees, to enhance the mutual sharing of good practices, and for the development of the Group as a whole.

The Sabancı Golden Collar Awards will be judged in six categories: Excellence; Individual Performance Management; Working Capital Management; Simple 6-Sigma; Innovation; and Contribution to Success. The award program will cover both the domestic and international locations of the Sabancı Group companies. The awards will be presented to winners at various levels, as individuals, teams and at the corporate level.

The announcement of the winners has been scheduled for April 2011. Those who are judged to merit a Sabancı Golden Collar Award on an individual or team basis will be given various prizes, including international travels.

In the inaugural Sabancı Golden Collar Awards organized last year, Avivasa won the Excellence Award, Teknosa won the Working Capital Management Award, and Brisa won the Individual Performance Management Award. In the categories in which individuals or teams compete; the Kordsa Global Team has won the Simple 6-Sigma and the Contribution to Success Awards while Olmuksa won the Innovation Award.