The Sabancı Holding Golden Collar Awards Have Been Presented

Organized in order to award Sabancı Group companies and employees for their successes and to instigate a mutual exchange of best practices, and known as the "Sabancı Oscars" by the group's employees, the Sabancı Golden Collar Awards were this year presented at a ceremony held at the Sabancı Center. The ceremony, organized this year for the second time, was attended by Sabancı Holding Chairman's Güler Sabancı, the company's CEO Mr. Zafer Kurtul, the group's managers and by employees. The ceremony was hosted by Cem Davran and Ceylan Saner. Approximately 600 employees from various Sabancı Group companies attended the awards ceremony.

The Sabancı Golden Collar Awards are organized into six categories. Brisa was granted the Grand Prize for Overall Excellence, Enerjisa Manufacturing-Wholesale companies and Çimsa were granted first place for Business Capital Management, and Brisa was awarded first place in Individual Performance Management. In the individuals and teams categories, Advansa was took the top prize in the Lean 6 Sigma category, Çimsa received the Contribution to Success category's award, and Kordsa Global was presented with the first place award in the Innovation category.

- "SABANCI: I AM PROUD TO REFER TO YOU AS MY COLLEAGUES"

Giving the ceremony's opening speech, Sabancı Holding's Chairman Güler Sabancı commented on that "we have only recently moved out of a period of crisis.

During that crisis period, the Sabancı Group together determined that success in this turbulent period is our own responsibility. Thanks to your devoted, successful and goal oriented efforts, I can proudly say that, as the Sabancı Group, we have fulfilled this responsibility. Now the crisis is of less importance to the world, and we overcame it a long time ago in this country. Consequently, now is the time to make new moves, to advance even further and higher. We will achieve this together, just as we have done previously. In order to achieve even more sustainable development, particularly during this period of growth, I believe that we should focus on creating value. When focusing on creating value, we need to also create differences in everything that we do. This is the essence of our Golden Collar Awards Program. To better create difference, to better cooperate, to be more innovative, to learn from each other, to support each other, to be a group, to stand together and to together create the synergy necessary for success... This is what the Golden Collar Awards are. This was our intention at the beginning and thanks to your efforts it has been achieved. We are glad that attendance is greater than last year. Our company's management has supported this entire process. You have all enjoyed learning and achieving together. Our aim is to create value for our country by creating value at Sabancı. I am honored and proud to refer to you as my colleagues. Because it is you who make a difference and it is you who bring happiness to not only to our Group but also to our nation. Therefore, I offer my endless gratitude for your contributions to the Sabancı Group". Sabancı concluded her speech with the words: "you all know that there is one thing more important than winning, and that is participating".

- ZAFER KURTUL: "IMPLEMENTATION IS AS IMPORTANT AS EITHER THE IDEA OR THE STRATEGY" 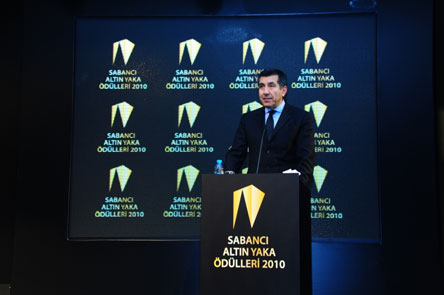 "Operating at exceptional levels in all categories clearly contributes hugely to our success." said Sabancı Holding's CEO Zafer Kurtul. "At previous gatherings I have already shared our main strategy with you: our strategy is growth & profitability. Our aim is to ensure that the Sabancı Group continues to experience healthy, sustainable and profitable growth at an ever accelerating pace. The figures alone indicate the significance of the Sabancı Group to our country, while they should also increase our feelings of responsibility. To remain successful, we cannot settle for anything less than the best. Therefore, we have to hold keep our objectives high, always.

The hardest thing to do is to maintain success. Today, the teamwork necessary for success is only achievable if each single one of us performs all of their tasks in the best way that they can as we can only achieve our lofty objectives through exceptional teamwork. To properly implement our strategy of growth & profitability, we need to be innovative, creative, to believe in innovation, be decisive in our work and put the greatest emphasis on productivity. Our group's vision is achieving and maintaining permanent superiority by creating a difference. Indeed, it is not possible to attain permanent superiority if we do not conduct our business in some different way. All successful organizations are the ones that could make change to their businesses and working methods. Beside all of the positive improvements that we will see in the upcoming period, it is inevitable that the level of competition will increase. We can cope with the competition only if we implement our group's vision in the best way possible. At this juncture, I would like to call your attention to another point. While an idea and its strategy may be good and strong, it is excellent implementation that is crucial for success; if the implementation is not successful, then even the most excellent idea will eventually fail. Once more, I would like to stress the significance of excellent teams to success. For us, all Sabancı Employees have Golden Collars".

- SABANCI: "EXCELLENCE IS A NEVER-ENDING JOURNEY"-

The grand prize of the Sabancı Golden Collar Award Program's "Excellence Award" was awarded to Brisa, with Brisa's General Manager General Mr. Hakan Bayman receiving the award. After taking the award, Mr. Bayman gave a speech in which he said, "Leadership and excellence are two things that do not tolerate complacency. You lose grasp of them the very instant you give into complacency. I am very happy for both myself and for my colleagues that we have won this award".

Having presented the award to Brisa's General Manager, Güler Sabancı then gave a short speech in which she said: "Brisa received the European Quality Award in Stockholm, in the hall in which the Nobel Prizes are awarded. I remember that night well.

I too am very happy, delighted, that Brisa has received the Excellence Award at this, the second Golden Collar Awards ceremony.

The journey of excellence never ends. Sometimes, you stop to collect a reward, but the journey itself continues.

Therefore, I personally think that Brisa has set an example for us by winning this award, and I believe that this should be a permanent example. Tonight, I was once more completely convinced that you will take Turkey's Sabancı to even greater heights with your excitement, enthusiasm, hard work and faith. The important thing is to take part in the journey, to go on, to take care of one's self and one's company, to say what to do and how to do it better. This, in fact, means being a better person, knowing the value of life and the things that we have and making the best of them."

SOME NOTES ABOUT THE AWARD'S ASSESSMENTS: