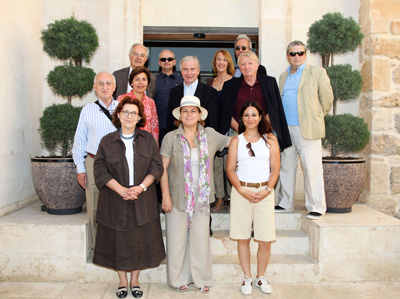 The International Consultative Committee of the Sabancı University's SSM have gathered in Mardin for their annual meeting. During the meeting, this year held at the SSM Mardin City Museum, issues such as the museum's goals, its long term projects, its relationship with the university, future exhibitions, the development of its collections and foreign partnership projects were all discussed. The President of Sabancı University, academic and Manager of the SSM Dr. Nazan Ölçer and other international consultative committee members including Prof. Gülru Necipoğlu from Harvard University, the members of the Department of Islamic Art and Architecture and a number of museum experts participated in the meeting under the chairmanship of the Sakıp Sabancı Museum's Chairman, Ms Güler Sabancı.

A member of the Consultative Committee, Prof. Dr. Oleg Grabar, died in January, 2011. Prof Grabar from Princeton's Institute for Advanced Study was one of the greatest Islamic Art historians.

While the museum aims to exhibit and promote Mardin's urban development and culture, the Dilek Sabancı Art Gallery, which was opened along with the museum, contributes to city's appearance by creating a modern and contemporary art environment at which temporary exhibitions can be staged in Mardin.