The World's First Youth Summit, “One Young World” was held in London 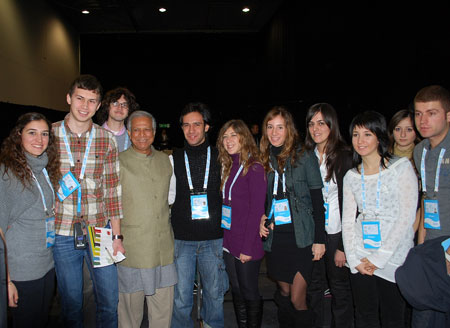 The world's first youth summit "One Young World", of which Sabancı Holding is one of the official sponsors, has started in London. The official opening ceremony of the summit, which will be held in London from 8-10th February, was held yesterday evening. London Mayor, Boris Johnson, celebrity musician and activist Sir Bob Geldof, Nobel Peace Laureate Desmond Tutu and Nobel Laureate Economist Muhammad Yunus spoke to the world youth at the opening. Prominent world figures such as Kofi Annan, Muhammad Yunus, Sir Bob Geldof and Desmond Tutu attended the sessions and shared their opinions with the youngsters during the first day of the summit.

There were fifteen Turkish youngsters among approximately 1000 delegates attending the One Young World Summit from 192 countries. Turkish youngsters had the opportunity to exchange ideas with their peers on global issues as well as meeting figures who steer the world, such as Muhammad Yunus and Oscar Morales.

The official opening ceremony of the One Young World summit was held on the evening of the 7th of February at Old Billingsgate. The official parade was undertaken with country flags on a boat tour on the Thames River. Afterwards, summit founders Kate Robinson, David Jones, Sir Bob Geldof, Muhammad Yunus and Desmond Tutu welcomed the attendees. Following a concert given by the OYW London Choir, London Mayor Boris Johnson, Sir Bob Geldof and Desmond Tutu delivered their speeches.

-High Level of Attendance to the Summit

Issues such as interfaith dialogue, the power of media and global business were discussed in the summit held at the London Excel Congress Center. Delegates from different countries took the floor of the sessions to present speeches, alongside international figures such as Kofi Annan, Muhammad Yunus, Sir Bob Geldof and Desmond Tutu. Senator John Kerry also spoke to the conference attendees via a video message.

-Deniz Cikis from Bogazici University spoke to the world's youth

Cikis delivered the following opinions during her speech: "With the right approach, multinational corporations can become a very effective tool in the fight against poverty. Multinational corporations have much greater power to effect the distribution of wealth than do small commercial enterprises and non-governmental organizations, even than many governments do. Multinational corporations possess budgets larger than the economies of most little countries. These corporations function in various parts of the world which makes the scale of their influence extend beyond borders. Increases in international trade, improvements in communications and logistics must mean to global businesses not only an opportunity to enlarge their market capacities, but also a change to pay their debts to society. Only this way we can get globalism to fight poverty and to serve for the common benefit".

The participation of fifteen Turkish youngsters in the One Young World summit, also known as "Young Davos", was sponsored by Sabancı Holding. Youngsters participating in the summit were selected based on an evaluation of videos they had uploaded to facebook.sabanci.com in which they each gave their message to the world.  During the selection process more than 80 videos that had been shot by youngsters across Turkey were evaluated. Criteria such as the level of their English abilities, their message's content and a diversity of university participation were all taken into consideration during the selection process.

-Opinions from the Attendant Youngsters

ALI SAMET DURGUN (BOGAZICI UNIVERSITY):  We were encouraged by the anti-system attitude of people, such as Desmond Tutu, who participate in social projects. We hope to be as successful as him in the future. One Young World is the biggest step of this initiative. From Turkey, only Sabancı Holding has embraced this project, which shows the importance that they attach to the future and to youth.

CENK TEMEL (YILDIZ TECHNICAL UNIVERSITY):  It is very important that prominent figures such as Bob Geldof and Desmond Tutu, who have inspired people, come together. My thanks go to the organizers of One Young World, and to Sabancı Holding which sponsored our participation.

BESTE MUTLU (SABANCI UNIVERSITY): Thanks to One Young World and to Sabancı Holding for giving us the opportunity to be heard.

DENIZ YILDIRIM (ISTANBUL TECHNICAL UNIVERSITY): Participating in One Young World means that youngsters can have a voice and be heard on world issues; and we can be active, not passive. Attending One Young World meant being at the forefront of dealing with global issues that affect the youth population.

-The Turkish Young People who attended the Summit

-About One Young World

One Young World aims to enable world youth under the age of 25 present their opinions, offer solutions and to make their voices heard on international issues such as the environment, health and education. At the Summit youngsters will focus on topics that have been proposed by the "Global Consultation Process", a research effort that spanned 70 countries; issues that they think need to be dealt with on a global platform immediately. Six issues have been selected:

These topics will be discussed in six main sessions.

Draft resolutions will be prepared by Oxford University's James Martin 21st Century School based on the topics that had been proposed during the Global Consultation Process. These drafts will be put to the vote in plenary sessions that will be held during the Summit and after each plenary session, the motion for resolution will be declared. During drafting, evaluating and voting of the One Young World resolution, delegates will be guided by counselors. The Counselors (among them are 3 Nobel Laureates) are as follows:

For the first time, in One Young World, countries were represented in proportion to their populations in a global meeting. The delegates were selected from among young people who were born in or after the year 1984, who had displayed leadership potential and were active in the business world, education, media, politics, health, religion, environment, agriculture and/or technology, and in voluntary work.