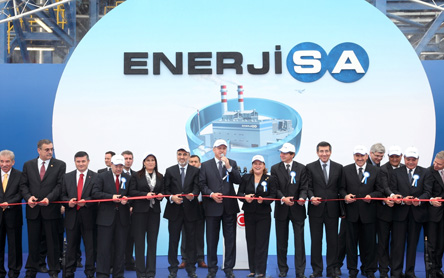 Enerjisa Bandırma Natural Gas Combined Cycle Power Plant, which was founded two years ago by Enerjisa, a joint-venture of Sabancı Holding and the Austrian energy giant Verbund, aiming to contribute to meeting Turkey's demand for electricity in the most efficient and most environmentally friendly manner, was opened by the Prime Minister Recep Tayyip Erdoğan.

In addition to the Prime Minister, the inauguration ceremony of the power plant was attended by the Minister of Energy and Natural Resources Taner Yıldız, the Minister of National Education Nimet Çubukçu, the Minister of Health Recep Akdağ, Energy Market Regulation Board Chairperson Hasan Köktaş, the Chairman and Managing Director of Sabancı Holding Güler Sabancı, the CEO of Verbund Wolfgang Anzengruber and a large number of invitees.

"We're meeting the demand for electric power in a sustainable, competitive, and environmentally friendly manner"

Speaking at the opening ceremony, the Chairman and Managing Director of Sabancı Holding Güler Sabancı declared that Sabancı Holding pioneered the energy industry in Turkey, saying, "We at Sabancı Holding are fully convinced that a competitive liberal market will prove viable in Turkey with all its institutions and regulations. Enerjisa Bandırma Natural Gas Combined Cycle Power Plant is the largest power plant to be commissioned in Turkey without any purchase guarantee but with confidence in a competitive free market." Sabancı went on to say, "Our preparedness to meet the demand of Turkey's industry and the its people for electric energy in a sustainable, competitive, and environmentally

friendly manner is a tangible sign of our commitment to the power sector. With the strength it draws from its partners Sabancı and Verbund, Enerjisa will determinedly carry on with its investments in order to reach its market share target of 10 percent in the year 2015." Noting that they wished to continue investing in Bandırma, Güler Sabancı announced that they were going to start building a second power plant as soon as they received permission for grid connection and a license. Sabancı added that the company also had plans to build a wind farm in the area.

Verbund CEO Wolfgang Anzengruber observed that Enerjisa, a Sabancı-Verbund joint-venture, commanded a key position in Turkey's energy market. "Enerjisa is the biggest investor in Turkey's power sector. We went on with our investments uninterruptedly even during the crisis period. Without delay, we managed to complete the construction of Enerjisa Bandırma Natural Gas Power Plant that will operate to international standards as the largest and most efficient power plant in Turkey. Turkey's rapidly growing economy and liberalized energy market played a very significant role in this success of ours" Anzengruber said.

7 billion kilowatt-hours of electric power to be produced annually

Completed in 26 months at an investment of 550 million euros, the Enerjisa Bandırma Natural Gas Combined Cycle Power Plant aims to meet, in the shortest time span, Turkey's demand for power that has been rising rapidly after the crisis. The Enerjisa Bandırma Natural Gas Combined Cycle Power Plant has become Turkey's most efficient natural gas power plant at an efficiency rating of 59%. With this high efficiency ratio, the Bandırma Power Plant will contribute to diminishing the threat of global warming by reducing carbon emissions by 50,000 tons per year. The power plant will meet approximately 3.5 percent of Turkey's demand for electricity by generating more than 7 billion kilowatt-hours of electric power annually.

Aiming to contribute to the local populace, environment, and economy in the locations of its existing or projected power plants, Enerjisa has opened the Enerjisa Bandırma Science High School built in cooperation with the Sabancı Foundation. Speaking at the inauguration ceremony of the high school with 26 classrooms that will accommodate 480 students, the Chairman and Managing Director of Sabancı Holding Güler Sabancı said, "The scope of the Sabancı Group's notion of social responsibility is not limited to our business activities and their impact. We expect all our organizations to manage their activities by taking their economic, social, and environmental consequences into consideration in each of our fields of operation and to regard the development of their community as a priority item on their agenda. Driven by this concept which is shared by our partner Verbund as well, the Enerjisa Bandırma Science High School constructed jointly by Enerjisa and Sabancı Foundation has been placed in the service of the Ministry of National Education for the purpose of raising the new generations that will build the Turkey of the future."