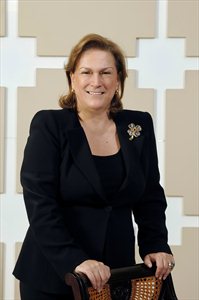 UN Secretary General Ban Ki-moon has extended Guler Sabanci’s tenure as a member of United Nations Global Compact board for another three years until 2018.

In a letter to Sabancı, Ban Ki-moon has underlined her key strategic contributions to the initiative. Secretary General as also shared his appreciation for Sabanci’s dedication and commitment.

With more than 10.000 participants in over 130 countries, the world's largest corporate sustainability initiative The Global Compact Board is chaired by United Nations Secretary General Ban Ki-moon. With its representatives from the business world, civil society, labour and employees, the board functions as UN’s highest level advisory body. First Turkish member of the Global Compact Board, Güler Sabancı will continue to participate in the initiatives to improve the partnership between the United Nations and the business world, to ensure that the specific compact principles are complied with, as well as providing strategic consultancy in alignment with The Global Compact principles. The UN Global Compact will celebrate its 1th anniversary, a milestone in the corporate sustainability movement, on 25 June this year.

Other members of the board include Paul Polman the CEO of Unilever, Kurt Bock Chairman of the Board BASF SE, Charles O.Holliday the Bank of America Chairman, Jean-Guy Carrier Secretary- General of the International Chamber of Commerce, and Toshio Arima the Director and Executive Advisor to the Board of Fuji Xerox. The board member candidates are defined by the recommendations from the Nominations Committee as well as the local organizations and assignments are approved by Ban Ki-moon, the Secretary General of the United Nations. Consisting of 31 members, the board stands for the regions all over the world as well as a wide range of industry sectors.

Güler Sabancı is the first female member of TUSIAD, Turkish Industrialists’ and Businessmen’s Association and European Round Table of Industrialists (ERT) since 2007.  Güler Sabanci also sits on the Executive Committee of International Business Council of WEF, Siemens AG Supervisory Board, United Nations Global Compact Board, the External Advisory Board of MIT Energy Initiative.

Furthermore in 2011, Sabancı Holding was the first Turkish company to commit to the Women's Empowerment Principles (WEPs), a joint initiative of UN Women and the UN Global Compact.

Launched in 2000, The United Nations Global Compact, brings companies together with key stakeholder groups including: Government, civil society, labour, investors, educators and the United Nations. It is a principle-based framework. It states ten principles in the areas of human rights, labour, the environment and anti-corruption. The UN Global Compact is a call to companies everywhere to: voluntarily align their operations and strategies with ten universally accepted principles in the areas of human rights, labour, environment and anti-corruption and take actions in support of UN goals.

Principle 1: Businesses should support and respect the protection of internationally proclaimed human rights; and

Principle 2: make sure that they are not complicit in human rights abuses.

Principle 3: Businesses should uphold the freedom of association and the effective recognition of the right to collective bargaining;

Principle 4: the elimination of all forms of forced and compulsory labour;

Principle 5: the effective abolition of child labour; and

Principle 6: the elimination of discrimination in respect of employment and occupation.

Principle 7: Businesses should support a precautionary approach to environmental challenges;

Principle 9: encourage the development and diffusion of environmentally friendly technologies.

Principle 10: Businesses should work against all forms of corruption, including extortion and bribery.