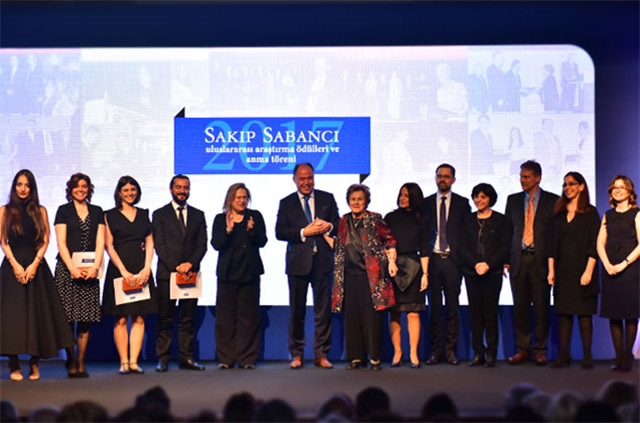 This year's Jury Prize in the Sakıp Sabancı International Research Awards was given to Nermin Abadan-Unat.

This year's Jury Prize in the Sakıp Sabancı International Research Awards was given to Nermin Abadan-Unat. The winners of the three equally-weighted Essay Awards were independent scholar Defne Kadıoğlu Polat, Zeynep Selen Artan-Bayhan from City University of New York, and Tolga Tezcan from the University of Florida.

This year's theme was "Europeans with Legacies from Turkey in Everyday Life." This theme was chosen partly because of Turkey's failure to achieve many aspects of its standards for gender equality in economic, political and social life despite significant efforts and progress in reducing inequalities.

Introductory remarks to the ceremony were delivered by Sabancı University Founding Board of Trustees Chair Güler Sabancı. Sabancı University Faculty of Arts and Social Sciences member Senem Aydın Düzgit, the president of this year's jury panel, explained the reasoning behind the jury's selection.

The three equally-weighted Essay Awards were given to: 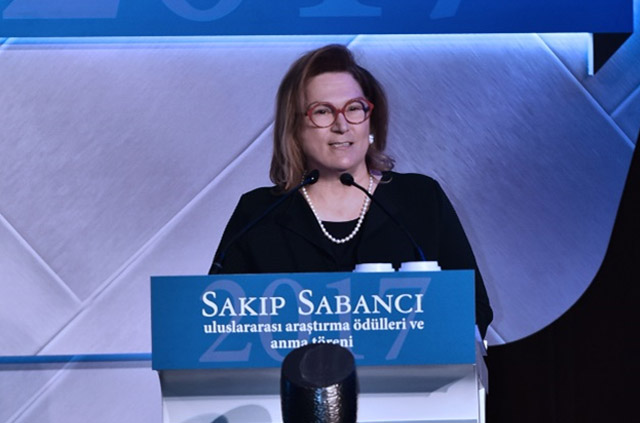 Sabancı University Founding Board of Trustees Chair Güler Sabancı began her speech by saying: “Tonight, we greeted you with a work of art created to commemorate the 10th year of the late Sakıp Sabancı’s passing. After being exhibited in many places around the world, it is now at home at the Sabancı Center."

Güler Sabancı said, “When you hear the name Sakıp Sabancı, the first thing that comes to mind about him is his genuine, candid, positive, constructive and worldly personality that endeared him to the Turkish people. Education, science, and scientists were of particular importance to him. He was a close follower of innovation. He would be excited about technological progress and often consult young people, taking their opinion. He always reminded everyone to clear the way for the youth, and express his confidence in them. That is why the university was the project closest to his heart." Güler Sabancı emphasized Sakıp Sabancı’s firm belief that a better future for Turkey lay in a well-educated and well-trained youth, continuing: "When the Sabancı Group set out to build a global university, he led the way and supported us all with his groundbreaking and constructive endeavors."

Güler Sabancı noted that Sabancı University educated its students to become open-minded individuals who adopt universal values and are always in pursuit of science, preparing them for future success in academic careers in the best universities of the world or professional careers in leading multinational companies. Sabancı continued, "Our alumni who start their own businesses take Sakıp Bey as an example and contribute to the Turkish and global economy. Thanks to them, Sabancı University achieves positions in global rankings that would have made Sakıp Bey proud."

Güler Sabancı said that Sakıp Sabancı had an excellent grasp of real life, which was why he was equally supportive of medical, natural and social sciences at once, believing that they would go the furthest if they ran abreast. Sabancı explained that his understanding was behind Turkey's only academic award in social sciences. Güler Sabancu said that the awards had covered a wide range of pressing issues from democracy to diversity, urbanization and gender equality, which was why this year's subject was chosen as "Europeans with Legacies from Turkey in Everyday Life".

Güler Sabancı argued that population movements occurring in Turkey and throughout the world had become one of the determinants of contemporary politics, saying “Population movements in a globalizing world gave rise to constructive interaction as well as conflict.”
Concluding her speech, Sabancı said that the next year's theme would be "Democratic Governance and Threats against Coexistence in Turkey and the World." 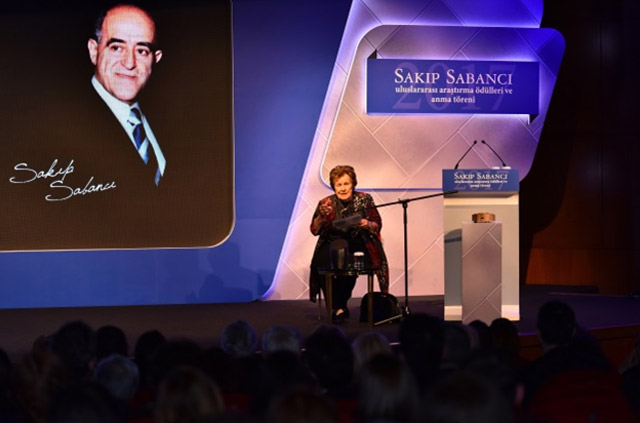 Population movements are as old as humanity

Sakıp Sabancı Jury Prize winner Nermin Abadan-Unat began her speech by remarking that population movements were as old as humanity. Abadan-Unat said that the movement of labor in Turkey started at the individual level in the 1950s, and later evolved into mass movements. Discussing Columbia University professor Daniel Lerner's survey of seven Middle Eastern nations titled "The Passing of Traditional Society", drawing attention to the fact that 49% of the Turkish respondents said that, if given no other choice, they would rather die than live somewhere other than Turkey. Nermin Abadan-Unat continued, “60 years after this finding, we have 4.5 million Turkish nationals living across five continents of the world. More than three million of them live in Europe, and 80% of those living in Europe are in Germany." She said that the expansion of transnational areas and developments in communication and technology were the reasons behind this unexpected occurrence. Abadan-Unat added, "We must take a close look at the relationship between countries that sent migrant workers, and those that received them."

Nermin Abadan-Unat argued that there were two distinct waves of Turkish migration. In the first wave of the 1950s, emigration was at an individual level and only possible through personal contacts or intermediaries. Abadan-Unat said that the adoption of the 1961 Constitution gave Turkish citizens the fundamental right of moving freely in and out of the country, which changed the circumstances. Nermin Abadan-Unat noted two important changes in the second wave: “While the German Democratic Republic prevented its citizens from moving to the West, the creators of Turkey's first Five-Year Development Plan (1962-67) made 'export of labor' one of their priorities due to rampant unemployment in Turkey. According to the initial agreement signed between Turkey and Germany in 1961, groups of male-only workers would go abroad for a year, return to Turkey when their 'rotation' ended, and contribute to industrialization in Turkey. In reality however, workers only had three minutes to sign contracts without knowing where they were headed, received no more than 1 to 3 hours of training for their jobs, 40% worked with no tools whatsoever, and they were housed in dormitories called 'heim' regardless of their marital status."

Nermin Abadan-Unat discussed the status of woman workers as well, saying that the number of women holding a working permit in Germany increased from only 173 in 1960, before the signing of the agreement, to 159,984 as of 1974. She said that at that point, the percentage of working women in Turkey was 11.6 while it was 29.1 in Germany. Nermin Abadan-Unat explained that, according to various studies, women raised in traditional families were trained to adapt to different circumstances when they married, so they were able to adapt more quickly to their life abroad and in many instances assumed the position of head of family.

Abadan-Unat said that the reason for the failure of the hopes that Turkey would benefit from education opportunities provided to new generations and create a workforce equipped with skills in high demand had to be first sought in the immigration policies of the host countries. “Accepting the largest share of Turkish workers, Germany assumed that once new workers stopped coming, the Turkish migrants would return home. When this did not happen, laws to encourage return migration were adopted, especially during the CDU administrations. Heads of family were offered 10,500 DM, with an additional 1,500 DM for each child. As a result of these efforts, some 250,000 Turkish citizens moved back to Turkey.”

Discussing educational issues with young members of Turkish immigrant families, Abadan-Unat said, “Ray C. Rist argues that there are three reasons which prevent youth from getting ahead in life: a. A selective system is in place; b. Schoolchildren are viewed as blank slates to be filled with highly compartmentalized knowledge; c. Teachers prioritize children whose native language is German. Today, education is almost exclusively in German. As a result, only half of Turkish youths are able to enter vocational schools, and those who can have fewer options. A limited number of Turkish youths are admitted to universities that educate students to be part of the 'elite', and Turkish girls are better than Turkish boys in this regard, for example in medicine."

Nermin Abadan-Unat said that another important change of character in Turkish labor migration was the rise of "entrepreneurship" where many Turkish immigrants started their own businesses and became "employers" themselves. As a result, Abadan-Unat said, Turkish immigrants or "new Europeans" began to make their voices heard in music, literature and drama in Germany. She said that the co-chair of the German Green Party was a Turkish person, as was the current Minister of Integration (Ayhan Özoğuz), and more than twenty Turkish men and women were in various political and administrative offices of Germany, and explained that these noteworthy developments led to the Turkish diaspora becoming more diverse, colorful and populous over time.

Nermin Abadan-Unat said that the advent of online communication from 2007 onwards helped Turkish nationals stay connected with their home country and surroundings, which led them to acquire multiple loyalties in a "transnational" identity. As the transnational sphere expanded and made new Europeans with Turkish legacies more visible in public life, Abadan-Unat said, which contributed to the rise of extensive Islamophobia in many European countries when considered together with the reintegration of Germany, ongoing wars in the Middle East, and acts of terrorism committed by radical Islamist organizations like ISIS: She said that the situation was exacerbated with the influx of mostly Muslim refugees into Europe in the last three years, provoking many countries who had admitted immigrants in the past to revisit their "multiculturalist" policies.

Abadan-Unat continued that a rising trend of "ultranationalism" was observed in EU countries as a result of complex international relations, and "the expansion of transnational areas and increase in the activity of international actors" as explained by Thomas Faist led to bilateral responsibilities on the integration processes of new Europeans with Turkish legacies. Nermin Abadan-Unat said “This caused an asymmetrical situation for origin and host countries, but has not been addressed at a sufficient level for six decades.”

Nermin Abadan-Unat concluded by saying “As worldwide communication networks envelop the world, the needs of new citizens must be given priority. Ongoing scientific studies must be made into differences that emerge in citizenship identities due to illegal movements, investor immigration, retirement immigration, climate-related immigration, and circular immigration. We cannot ignore transnational social identities.”

Almost 370 submissions from 31 countries over 13 years

Depending on the subject of the awards, up to six internationally-recognized scholars are chosen by the President, the Sabancı University Faculty of Arts and Social Sciences Dean and the Istanbul Policy Center Director to be invited as jury panel members. The President of the Jury Panel is chosen among its members.

FASS Dean and IPC Director are also members of the jury panel. Jury members may be disclosed to the media after the awardees are chosen and notified. Members are kept confidential from the public and the applicants prior to selection.

Nermin Abadan-Unat was born in Vienna and graduated from the Izmir High School for Girls in 1940 and Istanbul University Law School in 1944. After working in the Ulus newspaper in Ankara for a while, she won a Fulbright fellowship for graduate studies at the University of Minnesota in 1952. She returned to Turkey two years later and became the first female research assistant in the Ankara University Faculty of Political Science, and completed her PhD with a dissertation titled "The Public and Sphere of Influence" in 1955. She became an associate professor of political science in 1958, and professor in 1966. Nermin Abadan-Unat established the Political Behavior Chair in the Faculty of Political Science, and focused on the sociology of politics, mass communication, and from 1963 onwards, emigration from Turkey. She authored books and various articles in Turkish, English and German. Abadan-Unat was also closely interested in Women's Studies, and represented Turkey in the Council of Europe Gender Equality Commission from 1978 to 1999. The “Institute of Advanced