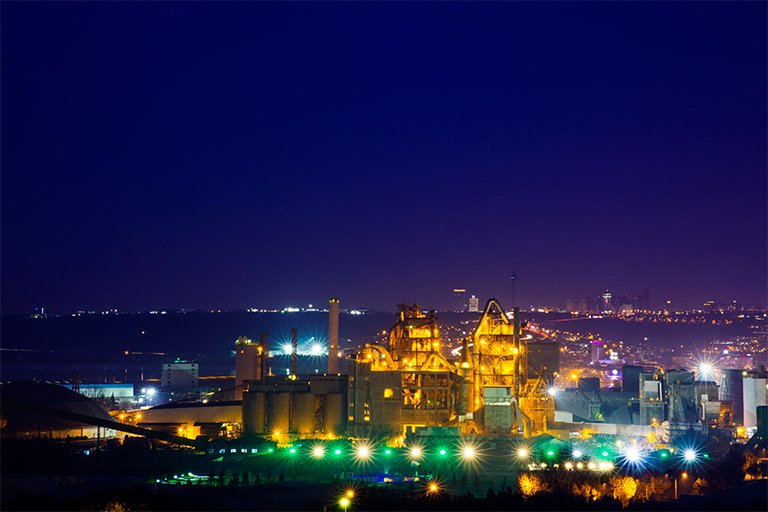 Sabanci Holding, one of the leading players of the industry with its experienced and specialized companies in their respective fields, realized 30% of Turkey’s cement exports in 2019 through Akçansa and Çimsa.

Akçansa was among the suppliers of the 1915 Çanakkale Bridge, which will bear the title of “the world's largest middle span suspension bridge”.

Akçansa and Çimsa directed their investments and focus to value added products and digitalization in 2019.

As of 2019, Akçansa, which carried out the highest export in Turkey's cement history, achieved approximately 4 million tons in exports with the logistic advantage provided by Çanakkale Port.

Akçansa is engaged in cement and ready-mixed concrete production in Marmara, Aegean and Black Sea. In addition to three cement factories in Istanbul, Çanakkale and Ladik, it owns six cement terminals in Ambarlı, Aliağa, Yalova, Derince, Marmara Ereğlisi and Trabzon. The company also offers services under the brand name “Betonsa” in 26 ready-mixed concrete plants spread over the Marmara, Aegean and Black Sea regions, and continues its aggregate production and sales activities under the brand “Agregasa” in plants located in Saray, Kemerburgaz, Samsun and Bursa. Karçimsa Cement Grinding and Packaging Plant was established with the 51% partnership of Akçansa and 49% of Karabük Demir Çelik İşletmeleri.

In 2019, approximately 30% of Turkey's cement exports from Sabancı Group

The Group increased its cement export revenue from TRY 1.2 billion in 2018 to TRY 1.8 billion in 2019. As of 2019, Akçansa, which carried out the highest export in Turkey's cement history, achieved approximately 4 million tons in exports with the logistic advantage provided by Çanakkale Port. With effective port management and customer portfolio based on long-term trust, the Company has gained important and permanent markets in export markets and improved its export revenues by 119% compared to the same period last year.

Akçansa also broke a record with the developments it showed in port management. By ensuring a 46% increase in the port capacity utilization rate in 2019, it carried out approximately 1 million tons of clinker export operations from Ambarlı Port for the first time within a year.

Despite the contraction in the domestic market, with the contribution of foreign sales, the total sales amount was closed in parallel with the previous year, and energy input costs increased due to both prices and exchange rates. Building Materials Group companies have made a difference despite this increase, both with improvements in fuel and raw material bill of materials and by using the advantages of logistics networks.

Overall, with 15% in Akçansa and 8% in Çimsa (including Afyon factory), alternative fuel utilization rate reached the highest in our group's history. Akçansa Büyükçekmece factory is positioned as a solution partner to the waste problem of Istanbul. Energy recovery is enabled by using most of the dried sludge from the treatment plants of İSKİ in Istanbul as fuel in the Büyükçekmece plant. In 2019, Akçansa especially achieved significant success by using 23% alternative fuel at its Samsun Ladik factory.

Akçansa was a strategic solution partner for 1915 Çanakkale Bridge

Akçansa was among the suppliers of the 1915 Çanakkale Bridge, which will connect Gallipoli and Lapseki and bear the title “the world's largest middle span suspension bridge” in 2019. With the product titled 1803 concrete, developed for long-term R&D studies, the concrete castings that continue in the middle of the sea of the project were completed during the year. In a total of six ready-mixed concrete facilities, 450 thousand m3 of ready-mixed concrete was casted with an experienced team of 125 people. Unlike standard concrete, 1803 concrete is a unique high performance product that provides workability in record times such as six hours for offshore casting, is resistant to environmental effects, impermeable, and its heat development can be controlled. While the 1915 Çanakkale Bridge Project leaves a durable legacy to future generations, it is an exemplary project to the world with innovative product studies and zero-defect project management.

The 1803 concrete product of Akçansa, produced as part of the Çanakkale Bridge project, will replace traditional sampling methods and replace samples in the future and lead digital transformation in the sector.

Akçansa also initiated efforts on using artificial intelligence for clinker production made with the rotary kiln, which is currently carried out by human operators in order to reduce the dependency on foreign sources and increase productivity in imported energy sources with the production excellence approach. The developments are achieved with the contribution of SabancıDx and consultants, and if the pilot practice is successful, it is planned to be used in dissemination and in other rotary kilns. Development and testing processes continue in the pilot practice.

Akçansa became the first brand in Turkey to obtain the CSC “Responsible Utilization of Resources Sustainability Certificate”, awarded to cement, concrete and aggregate manufacturers and globally accepted in line with the rules specified by the Concrete Sustainability Council with its Kemerburgaz Ready Mixed Concrete Plant.

As a company investing in human capital, Akçansa became the first company that was awarded the Golden Standard in Investors in People (IIP) in the IPP 6th Generation in Turkey, the only human-oriented quality standard in the world, which is an international human management and development standard, focusing on all practices for human resources development and management.

My Neighborhood Social Responsibility Project, which has been continuing since 2015 and reaching more than 30 thousand people by Akçansa, started education with students, teachers and parents in Samsun Ladik after Büyükçekmece and Çanakkale. At Akçansa Mobile Education Center, TOÇEV’s expert psychologists offer support to children against difficulties of being away from their families with programs for high school boarding students.

The contraction in the domestic market in 2019 caused Akçansa and Çimsa to focus on exports, and working at full capacity resulted in breaking a record in exports. In addition to the continuation of this success in exports, the priority of Sabancı Group cement companies for 2020 is to implement high value added digital transformation projects. In this respect, works involving smart factory systems and cloud solutions are progressing rapidly with the goal of improving production and energy utilization efficiency.